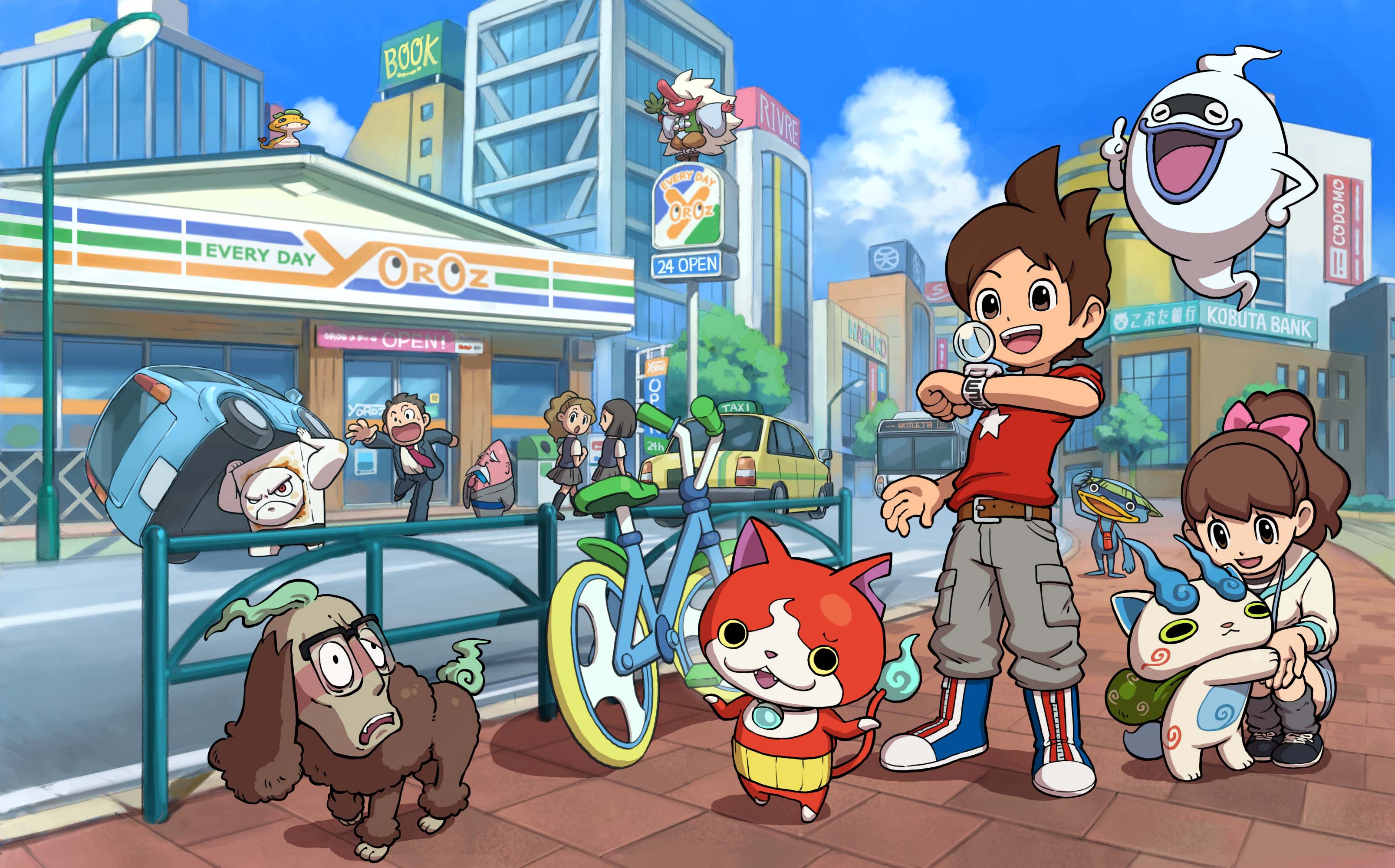 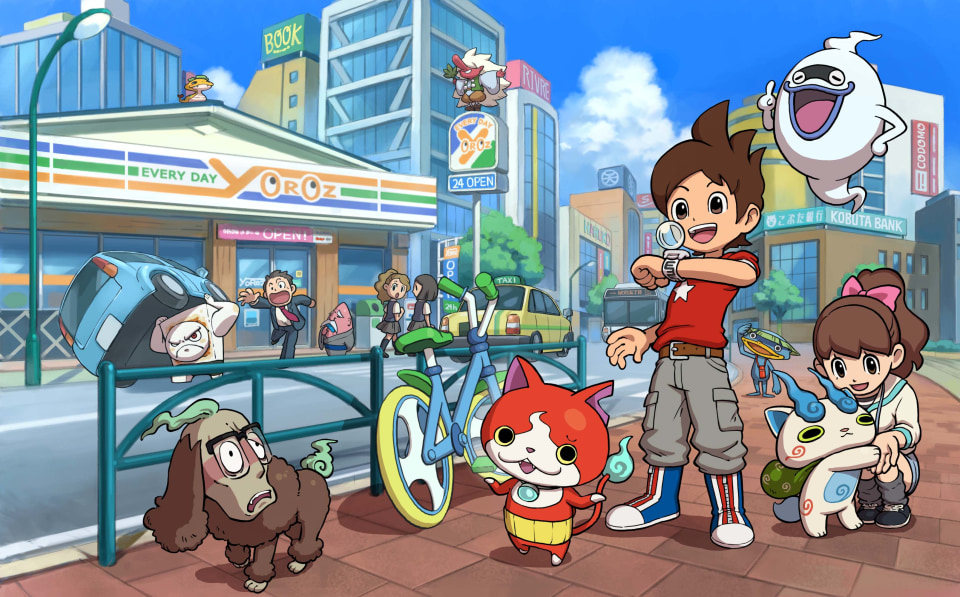 I was sitting on an eight hour flight back from London, my 3DS the only thing illuminating my little corner of the plane. My boyfriend, bored in the middle seat next to me, had leaned over to look at what I was doing. "That looks like Pokémon." His tone was surprised, and maybe even a little disgusted. Because at first glance, it did look like another entry in Nintendo's kid-friendly RPG franchise. There was the typical tween-aged protagonist, strolling along a disturbingly empty street, followed everywhere by a small unearthly creature. In fact, I had six more creatures at my disposal, all with their own distinct abilities and affiliations. They fought other creatures and, sometimes at the end of a fight, the vanquished would even ask to join my team.

It wasn't Pokémon, though. This was Level-5's Yo-Kai Watch, the latest in a long line of monster collecting games that emerged in the wake of Pokémon's debut almost twenty years ago. I'd seen plenty come and go and never took much interest in any of them, but Yo-Kai Watch seemed special.

It used to be my job to care about things like this: For five years I worked at The Pokémon Company as a brand editor and, though I'm no longer with the company, my knowledge of Pokémon isn't something I can just turn off. I still play the games on a regular basis and, sometimes, I'll even go to the store to get rare Pokémon. I also still keep an eye on the competition, which led to me ask the question, "How the hell is Yo-Kai Watch outselling Pokémon in Japan?" Part of it is that the franchise's rollout has been carefully controlled, with simultaneous releases of the game and television show to maximize its impact. This is basically how Nintendo launched Pokémon in the United States, and even the time frame matches: Pokémon debuted in Japan in 1996 and came to the US two years later; Yo-Kai Watch came out overseas in 2013 and is only hitting North American shores now.

But in playing Yo-Kai Watch, I discovered it's also actually a pretty good game, though it's definitely not Pokémon.

Not that there aren't a lot of similarities. I started up the game, chose the female avatar, and was sent on my first quest: to catch bugs. "Oh come on," I yelled the screen. Anyone familiar with Pokémon knows its origin story: franchise creator Satoshi Tajiri was inspired by his childhood love of bug collecting. Could Yo-kai be more obvious in its inspiration?

The city in Yo-kai Watch isn't a way station between adventures. It is the adventure.

The game definitely shares the same love of exploration and discovery enshrined in the Pokémon series. I found myself enjoying poking around various trees and bushes to find said bugs, and later, the Yo-kai that give the series its name. But the mechanics of Yo-Kai Watch encourage more participation from the player than Pokémon, with little mini-games baked into the battles. To execute special "Soultimate" moves or "Purify" tainted Yo-kai you may be asked to spin a wheel, pop bubbles or trace shapes on the touchscreen. For someone used to just mashing away at the 'A' button, it took some time for me to get accustomed to this increased level of interaction. Yo-Kai Watch is a game that demands your attention, which is a wake-up call for someone who often plays Pokémon while my eyes and ears are elsewhere. I've often leveled up my Pokémon by just twirling my character around in the tall grass until a wild Pokémon attacks, occasionally glancing down to make sure my entire team hasn't passed out. When playing Pokémon is part of your job, this is the kind of thing you can get away with at your desk. Or while watching TV with a loved one. Or... well, pretty much anything. As such, I tend to finish the games pretty quickly.

This hasn't been true of Yo-Kai Watch. The game isn't really hard, with most of the challenge grounded in my unfamiliarity with the mechanics. I understand Pokémon types, natures and egg groups. But while the attributes and tribes of Yo-kai are similar... they're not the same. So my explorations have extended to figuring out how all the pieces fit together: Searching for new Yo-kai and battling them. Learning their personalities and skill sets. Testing out my team's prowess in battle.

And yet, the thing I find myself doing the most is just walking around.

It's not that I don't have plenty to do in the game, or that I don't enjoy the objectives laid out for me. It's just that right now, wandering around the world of Yo-Kai Watch is the thing that appeals to me the most.

I don't think I would have appreciated Yo-Kai Watch as much as I do if I hadn't taken that London vacation. Because I find that visiting the city of Springdale in the game transports me in a lot of the same ways. I enjoy the attention to detail paid to every sidewalk, street and staircase. "Look," I told my boyfriend, "I have to push the button to cross at the crosswalk." When I decided to jaywalk, I almost got hit by a car. It's this amount of detail that's led to Yo-Kai Watch feeling like a city I visit. It has a very strong sense of place to me. Villages in Pokémon often have this very sparse feeling to them, and for good reason: You're not meant to spend a lot of time in them. The game wants to keep you exploring the great outdoors as much as possible. The world of Pokémon isn't just meant to harken back to Satoshi Tajiri's love of bug collecting, but the time spent searching for them in woods and streams. Pokémon are the animals of their planet, and so you must confront them on their own turf: the natural world.

Yo-Kai Watch wants you to discover the world you already live in.

Yo-kai are very different, though. They're not animals, they're spirits, specifically based on the yo-kai of Japanese folklore. In this tradition, animals, places and even ordinary objects are all thought to have their own spiritual force. The supernatural can be found all around you, not just in the natural world, but also in urban settings. So in the games, Yo-kai are very much a part of everyday life -- they are part of civilization. And as such, in order to engage with them you must engage with the city.

The city in Yo-kai Watch isn't a way station between adventures. It is the adventure. Your character isn't being asked to leave home and travel far away to find their destiny because it's all around you... if you know where to look. Sure, a big part of the game's mechanics lies in using the Yo-kai Watch to detect these somewhat pesky creatures. But a lot of it is also about everything in between: The streets you walk down and the people you pass. Instead of transporting you to a pastoral fantasy world like Pokémon does, Yo-Kai Watch wants you to discover the world you already live in.

Image credits: Nintendo
In this article: art, entertainment, gaming, Level-5, nintendo, opinion, Pokemon, Yo-KaiWatch, yokaiwatch
All products recommended by Engadget are selected by our editorial team, independent of our parent company. Some of our stories include affiliate links. If you buy something through one of these links, we may earn an affiliate commission.