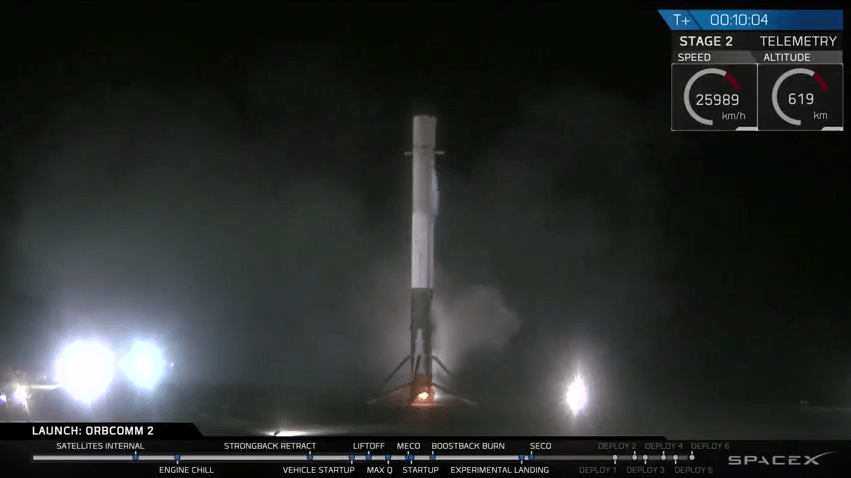 SpaceX's last flight in June ended with its Falcon 9 rocket breaking up shortly after launch. When the rocket is meant to be recoverable after launch, you can see why this would be an... issue. CEO Elon Musk tried to improve his odds, this time around, pushing back the launch of its upgraded Falcon 9 rocket to Monday night. Better weather this evening offered a 10 percent better chance of the rocket booster landing on solid ground in a recoverable state, and for those that watched the stream, it looked like a surprisingly stable landing: a bright flare of light followed by the appearance of a fully vertical rocket -- this was the stage one landing. SpaceX is checking the rocket and satellite payloads now (update: all the 11 satellites were deployed successfully) and we'll update when we hear more.

SpaceX had also tried recovering its rockets with drone ships, but that unsuccessful too. If the company is able to reclaim rockets after they've launched once, it would help decrease the cost of launching, well, anything into space, which is probably why it's so difficult to do. The full live broadcast is now live:

Amazon and Blue Origin boss Jeff Bezos was quick to congratulate the successful landing, although his company's own landing was after a shallower flight -- and didn't involve launching a bunch of satellites into orbit on the way.

In this article: elonmusk, Falcon9, landing, launch, rocket, satellite, science, space, spacex, timeline16race4space
All products recommended by Engadget are selected by our editorial team, independent of our parent company. Some of our stories include affiliate links. If you buy something through one of these links, we may earn an affiliate commission.