Gesture-based system are usually attached to video game consoles like the Microsoft Kinect or your computer like the Leap Motion. Google's ATAP team figured that the smaller form factor of the smartwatch segment needed its own finger-waving way to control the devices without having to reply on the smartphone. It's Project Soli replaces the physical controls of smartwatches with your hands using radar to capture your movements.

The system uses broad beam radar to measure doppler image, IQ and spectrogram. The chip recognizes movement, velocity and distance and can be programmed to change the input based on that distance. the idea is to use some of the same gestures your already using for your mobile devices and augmented those with hand motions that seem natural to interact with a Soli-enabled device. "What we propose is that you use a hand motions vocabulary," said ATAP technical program lead Ivan Poupyrev.

The Soli chip works within the 60Ghz radar spectrum at up to 10,000 frames per seconds. The final chip will contain everything it needs to be plug and play including the antennas. ATAP says the device can be made to scale. 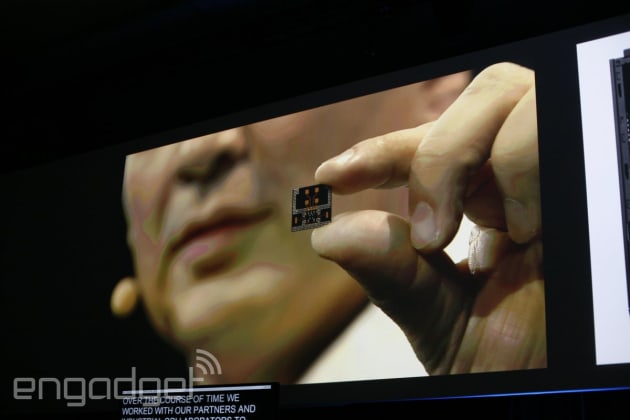 The Project Soli team is still working to finalize the board, but it's gone from a device the size of a pizza box to about the size of an SD card in 10 months. Soli information will be released to developers later this year.

Source: Project Soli
In this article: ATAP, google, googleio2015, ProjectSoli
All products recommended by Engadget are selected by our editorial team, independent of our parent company. Some of our stories include affiliate links. If you buy something through one of these links, we may earn an affiliate commission.