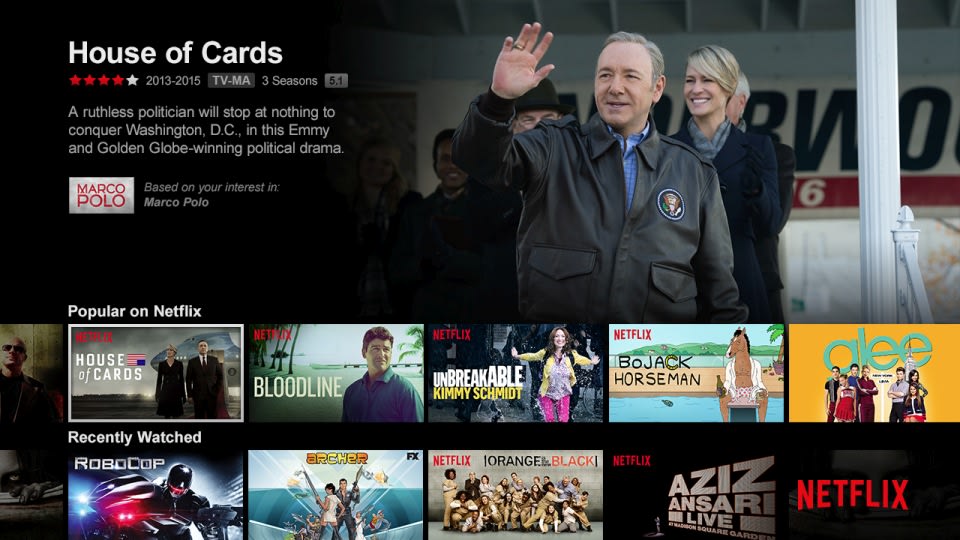 While Netflix has focused on rolling out more original content to more countries over the last couple of years, we haven't seen as many updates to its software as we used to. Last week the streaming video service said it would start optimizing its mobile apps, but first up is a tweak for the TV apps you probably use more often. Netflix says this is the first major change its TV apps have had since the new look rolled out in late 2013, and it will start or resume video as soon as you select a title, while keeping the info on the screen (check after the break for a GIF showing how it works). An earnings report earlier this year mentioned bringing video "forward" in the TV experience, and this seems to be a part of that plan, delivering what Netflix says is a more cinematic experience.

Cinematic or not, when I've fallen asleep mid-OITNB binge, a visual hint would make it easier to remember which episode I was on so this should help. When we spoke to Netflix's Cliff Edwards in January we heard about plans to put its app on the same footing as cable, and creating a way for viewers to passively slip into watching makes that possible. Once you turn on cable TV the video is usually just there, while with streaming you've always had to pick something first -- this new feature combined with faster loading apps and video makes your Netflix & chill moment more casual . If you're using an older TV or device you may not see the feature, but it's rolling out to "eligible devices" (Netflix Recommended TVs are a good bet) globally over the next few days.
Source: Netflix Blog
In this article: app, browse, hdpostcross, netflix, streaming, tv, ui, update, video
All products recommended by Engadget are selected by our editorial team, independent of our parent company. Some of our stories include affiliate links. If you buy something through one of these links, we may earn an affiliate commission.