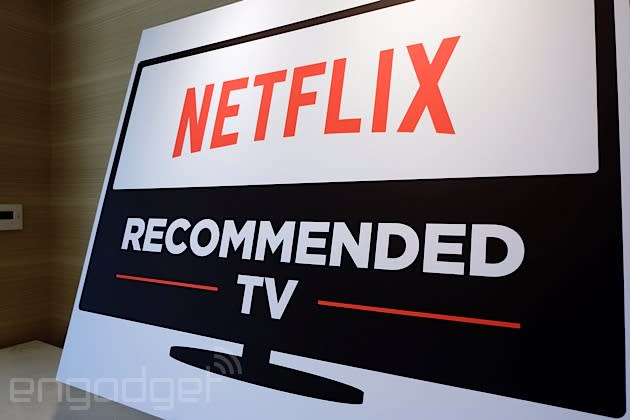 Netflix is launching a new initiative to recommend the best TV for its streaming service. Starting this spring, a "Netflix Recommended TV" logo will start appearing on TVs from Sony, Sharp, Vizio, LG and manufacturers of Roku TVs (so far TCL, Best Buy's in-house Insignia brand and a few other second-tier players are signed up to produce Roku sets). What does this certification actually mean? According to Netflix, TVs bearing the logo will have hit some "performance criteria" targets including fast app launch, fast resuming of video playback or the ability to power a TV directly into the Netflix app. The program will initially be available in the US, but the features it brings will spread around the world through this year.

In this article: ces, ces2015, hdpostcross, lg, netflix, netflixrecommendedtv, roku tv, sharp, sony, vizio
All products recommended by Engadget are selected by our editorial team, independent of our parent company. Some of our stories include affiliate links. If you buy something through one of these links, we may earn an affiliate commission.