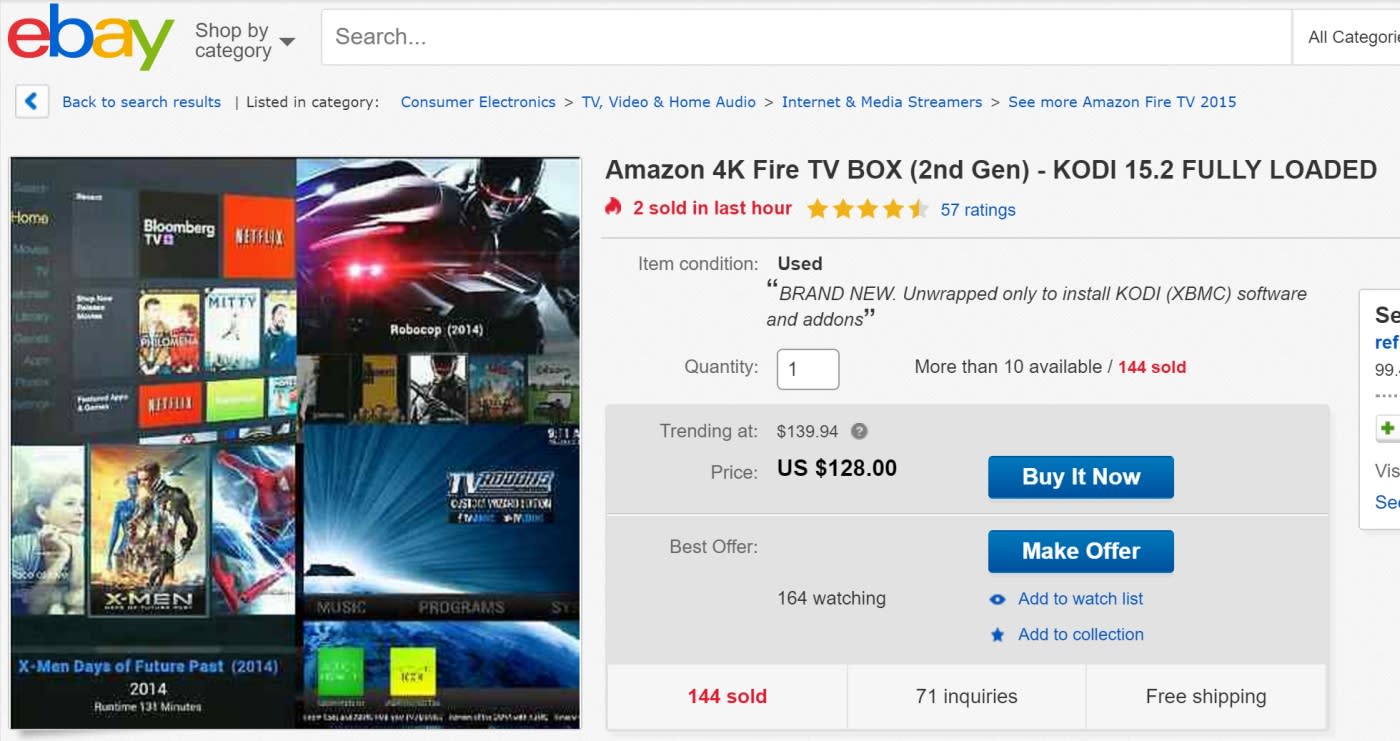 Pirate TV boxes have existed since about five minutes after TV boxes were first introduced. Whether it was rewired cable boxes or satellite TV setups with hacked cards, it's been a reality of the business for decades. The latest iteration on this idea involves a number of Android-powered boxes that are preconfigured to find and stream pirated content from the internet. I noticed right away that the Fire TV is a perfect vessel for Kodi (back then it was still called XBMC), and I wasn't the only one -- which is causing a ton of problems for the developers who actually make Kodi.

One look around YouTube reveals setups touting "The Beast," "Genesis" and others that promise access to current movies, cable TV and more without the issue of actually paying for any of them. Sales of these boxes on places like eBay or by resellers who load the software have become so popular that some believe it was behind Amazon's UK shortage of Fire TV sticks last year. The biggest problem for the team behind Kodi is that some people, both in the industry and end-users who buy the boxes, think it is behind these sales, or the pirated content played on the boxes. Some of the people who buy them are even told the streams are completely legal.

The problem is that obviously none of that is true, many of the plugins used to stream the content are poorly made or otherwise untrustworthy, and they may stop working suddenly. When that happens, people end up on Kodi's forums trying to find out what's wrong, even though it didn't create the plugins they're using or the streams they're watching and has no control over them.

While Kodi has no plans to lock down its smart TV platform from third party developers, it's trying to create some space from these activities. Now, it's asking the community of users to call out YouTubers or resellers using its name to promote these boxes. From its perspective selling a box with its software is ok if it's a "vanilla" install without a ton of third party plug-ins added, and if there is anything added, it should be entirely rebranded. That way Kodi can go on making an independent TV UI that's focused on doing what people need, and it doesn't have to deal with the problems of pirates trying to make a quick buck.

My advice? Support the people who make the content you want to watch. For whatever configuration of a TV setup you want to use, learn what you're doing and load the software yourself. If you're trying to access content you actually own, there will be plenty of people out there who can help. Then if something breaks then you'll know what's happening and who to ask about how to fix it. Legitimate plugins like the ones for HDHomeRun can make configuring your own TV experience and ditching the cable box possible, if you learn how to use them.

In this article: amazon, AndroidTV, av, entertainment, FireTV, FireTVStick, gear, google, internet, Kodi, piracy, streaming, TheBeast, video, XBMC
All products recommended by Engadget are selected by our editorial team, independent of our parent company. Some of our stories include affiliate links. If you buy something through one of these links, we may earn an affiliate commission.