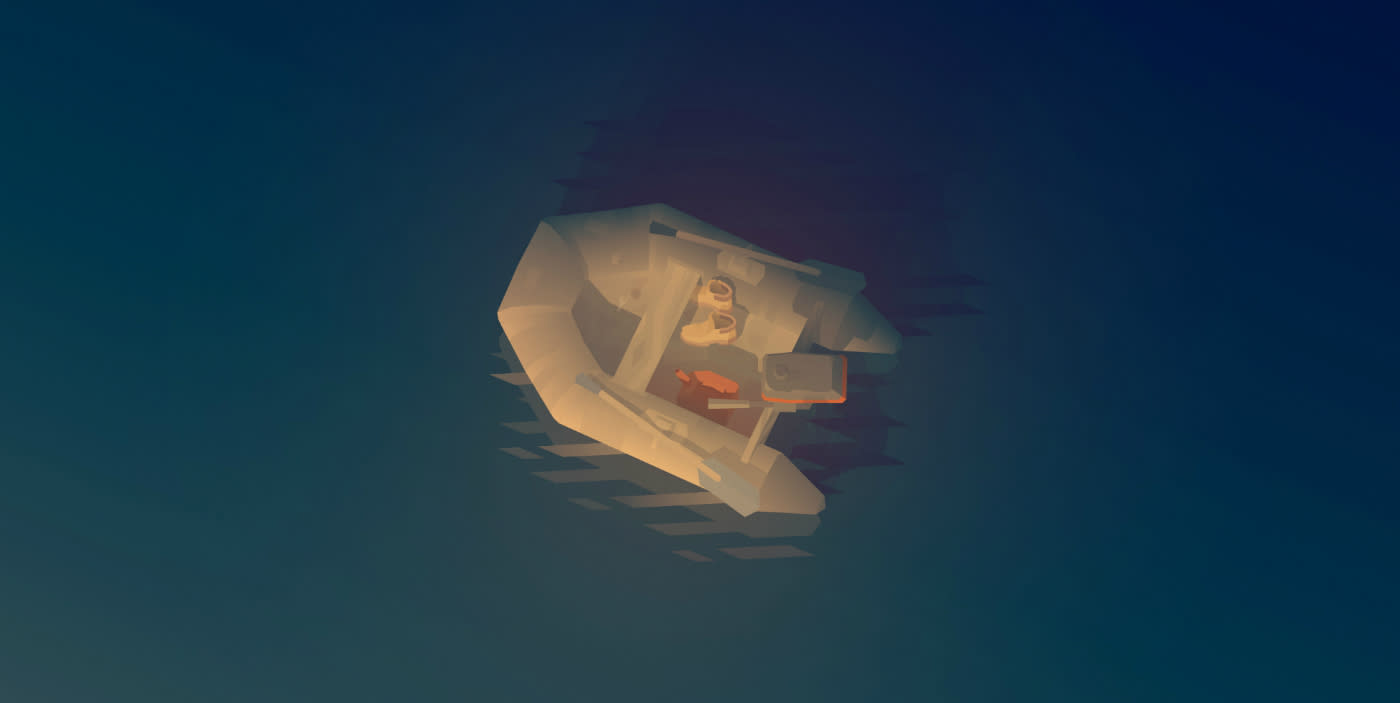 Where the hell is 'Kentucky Route Zero'?

The fourth act is Cardboard Computer's most mysterious yet, mostly because it's been two years in the making.

There's an important question at the heart of Kentucky Route Zero. As Conway and his dog drive through dusty, humid towns collecting strange friends and glowing-yellow leg bones, a single question haunts their tire tracks: Where the hell is Kentucky Route Zero? Not in geographic terms -- Conway does eventually find the highway -- but on a grand scale, where is it actually located? On another plane? In another galaxy? When you're on Route Zero, where are you, really?

The game is supposed to comprise five acts, but it's been nearly two years since the third installment dropped. Originally, developer Cardboard Computer pledged to launch one new act every three months, with the final episode scheduled to land in Oct. 2014. So fans are asking the question again, this time literally: Where the hell is Kentucky Route Zero -- specifically, its fourth act?

That's Jake Elliott, one half of Cardboard Computer, alongside fellow developer Tamas Kemenczy; musician Ben Babbitt composes the game's haunting score. Elliott has a rough idea of when the fourth act will go live, but that timing is a secret for now. A lot about the fourth act is shrouded in mystery, including why it's taken so long to develop. Cardboard Computer has been quietly working away on the episode for 21 months, but the team hasn't divulged much about its content, leaving fans to wonder and speculate. The secrecy isn't because Elliott is afraid to put his work out there: He's a seasoned artist and a high-profile independent game developer. Shyness isn't his issue. Spoilers are.

"I think a lot of it is just wanting to -- I don't know. You can hear I'm kind of struggling to talk about this stuff now without spoiling anything," Elliott says. "I don't want to be too precious about it, that it's like this paper flower that's going to wilt if I tell you too much about it. ... It's something we feel protective of, people's first experience with it."

Elliott carefully drops slivers of information about the fourth act: It takes place in entirely new settings with a lot of new characters, and it has fresh mechanics. These mechanics aren't superficial spectacles, either. Think back to the end of Act 3 (take your time; it's been awhile): Conway and friends find a mold-powered supercomputer called Xanadu that basically functions as a separate video game within Kentucky Route Zero itself. That's one example of what Elliott means when he talks about "new mechanics."

The new settings take up a lot of time, too. In the previous three episodes, Cardboard Computer was able to reuse some environments as players traveled among known locations. Not so in Act 4. And then there's the technical side of things. To make these new features function properly, Elliott and Kemenczy had to overhaul the game's dialogue and movement systems. Elliott rewrote the dialogue engine -- "It looks the same and it hopefully feels the same. Hopefully it feels a little bit better," he says -- and Kemenczy created a new "blocking manager" that allows him to get more emotions and gestures out of the characters.

"And there's a lot of stuff that I think will be obvious when you play it, these new experimental things that we don't want to get into until it's out," Elliot says.

"Experimental" is how Cardboard Computer rolls, and it's another factor in Act 4's extreme delay. Elliott and Kemenczy have released three free "interludes" between Kentucky Route Zero's acts, and they've grown exponentially more intricate as the years have dragged on.

The first one, Limits and Demonstrations, is a short, interactive art exhibit that plays out like a traditional point-and-click adventure game. It's simple, yet it expands Kentucky Route Zero's world and teases interactions in Act 2. However, when it was conceived, the interlude's narrative potential was an afterthought. Some people were having problems running the game, and each work of art in Limits and Demonstrations actually tests out different aspects of players' graphics cards.

"When we started selling episode one, we had no idea of having these interludes between them," Elliott says.

Technical issues aside, the team enjoyed the world-building aspect of that first interlude and decided to continue churning them out between episodes. The second interlude, The Entertainment, is a stage play within the game world, "written" by a fictional character. It's set in a dimly lit bar, and players inhabit a silent patron alone at a table; they're able to watch the play, stare at the audience and interact with bits of the set to reveal stage notes and other small goodies. But that's not experimental enough for Cardboard Computer: The script of the fictional play The Entertainment is available for purchase in physical form. Yes, under the name of a fictional author and with a fake ISBN.

The most recent interlude, Here and There Along the Echo, is Cardboard Computer's most ambitious by far. Its on-screen component features a telephone that calls just one number: An audio guide to the Echo River and its surrounding attractions (voiced by Kentucky-born musician and actor Will Oldham). But, as demonstrated by The Entertainment's real-life script, Elliott and Kemenczy can't be contained by digital walls. Kemenczy also got his hands on a few dozen old phones and dug around in their circuitry so they could only "call" the Echo River number. Then, Cardboard Computer auctioned some of them off.

"You could just plug it into a wall and have a physical version of this piece," Elliott says. "It was a ton of work for him, designing that circuit but then also assembling it."

Kemenczy and Elliott wanted to sell the phones on a rolling basis leading up to the release of Act 4. They ended up selling three -- one on eBay under a fictional profile, one via a live, '90s-style home-shopping sale and one at a physical auction at Chicago's Nightingale cinema. For the eBay sale, Elliott and Kemenczy added a flowery description of the pink Western Electric model 2500 that offered hints into the game world, plus they made a video showing off the phone in glorious detail. For the home-shopping film, Kemenczy physically modified a digital camera to shoot in an authentically grainy, VHS style. At the live auction, they brought in a real auctioneer, and the event was written up by a handful of local outlets.

Each of the phones sold for around $300.

"I think the reason we felt compelled to do all that weird, extra stuff was just a basic discomfort with the idea of selling art," Elliott says. "We had to make it into some kind of theater or something so that people would get something out of it even if they weren't paying for it. I think the interludes kind of work that way in general, it's like half of the game, basically, is free."

Elliott and Kemenczy wanted to sell more phones, but the auctions were cutting into development time on the actual game. They've paused the project for now, though Elliott hopes to return to it in the future.

"We definitely err on the side of following our intuition and going wherever we want to go," Elliott says. They do edit themselves, though: They've abandoned some features throughout development, but they don't scrap anything because it might take too long to implement, Elliott says. "That doesn't really happen very much. I don't know -- maybe it should, but it doesn't."

Kentucky Route Zero and its interludes blur the lines between reality and fantasy, virtual worlds and physical spaces. Act 4 is poised to do the same but on an even larger scale. Ben Babbitt's music, at least, is more ambitious than ever before. He records his own foley sounds and uses actual instruments rather than electronic facsimiles to craft the game's mood. The music in Act 4 includes a lap steel guitar and a theremin, two instruments that Babbitt didn't know how to play before development started.

"The theremin is really hard to play," Elliott says. "I was surprised that he decided to use a real theremin instead of using a computer, but I'm sure it will be worth it."

Elliott plans on teasing Act 4 as well as he can, without spoiling anything, of course. The Cardboard Computer Twitter account recently posted images from the new installment; no text, just the pictures. That kind of subtlety feels right to Elliott. The day Act 4 is finally ready for public consumption, it'll probably just pop up online, skipping the release-date announcement system entirely.

"It's hard, having been close to it for so long, this time there's some anxiety about whether it's going to land the way that we hope it will," Elliott says. "That anxiety has had a lot more time to build than it had with the other ones."

We know, Elliott. We know.