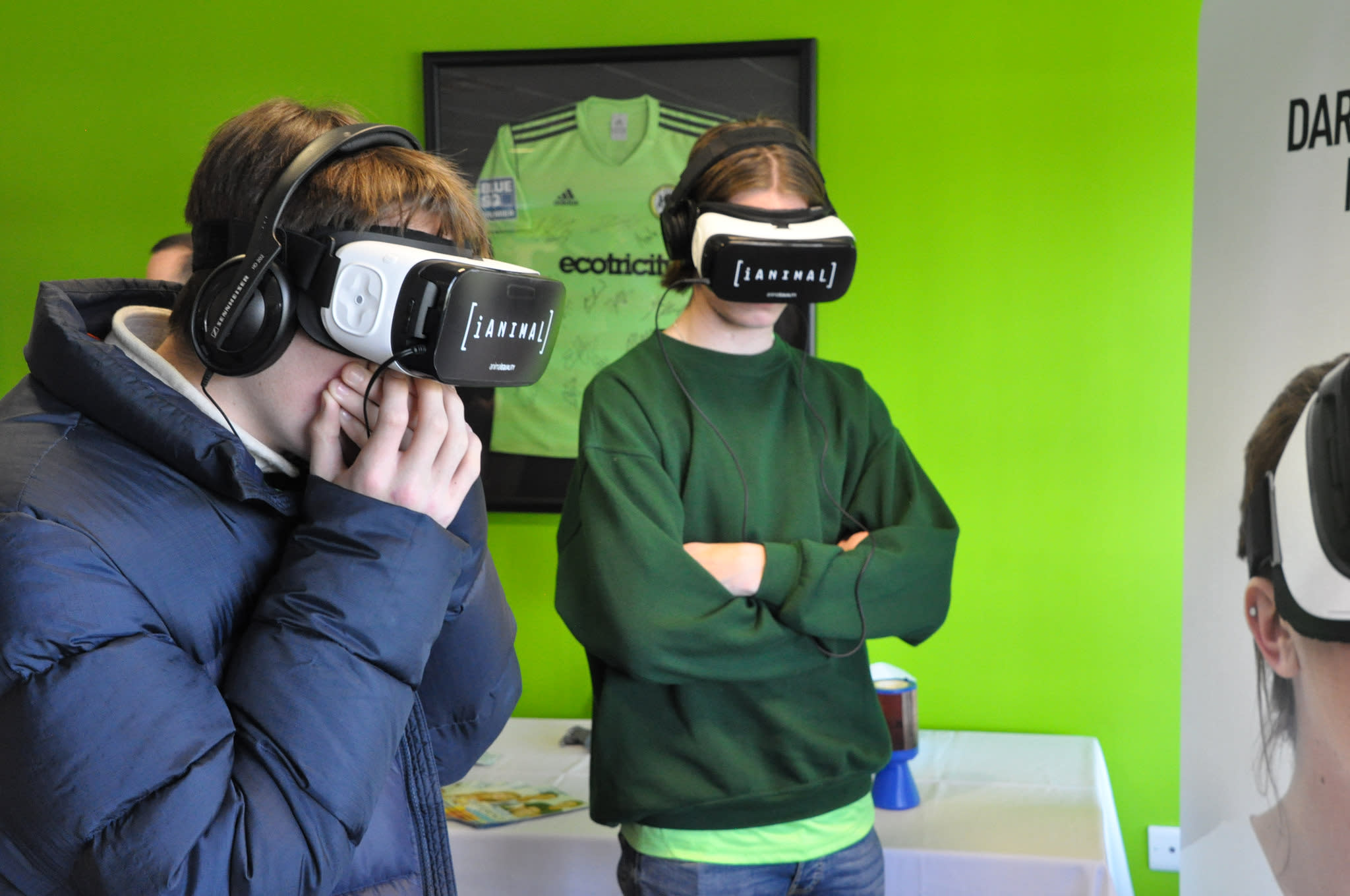 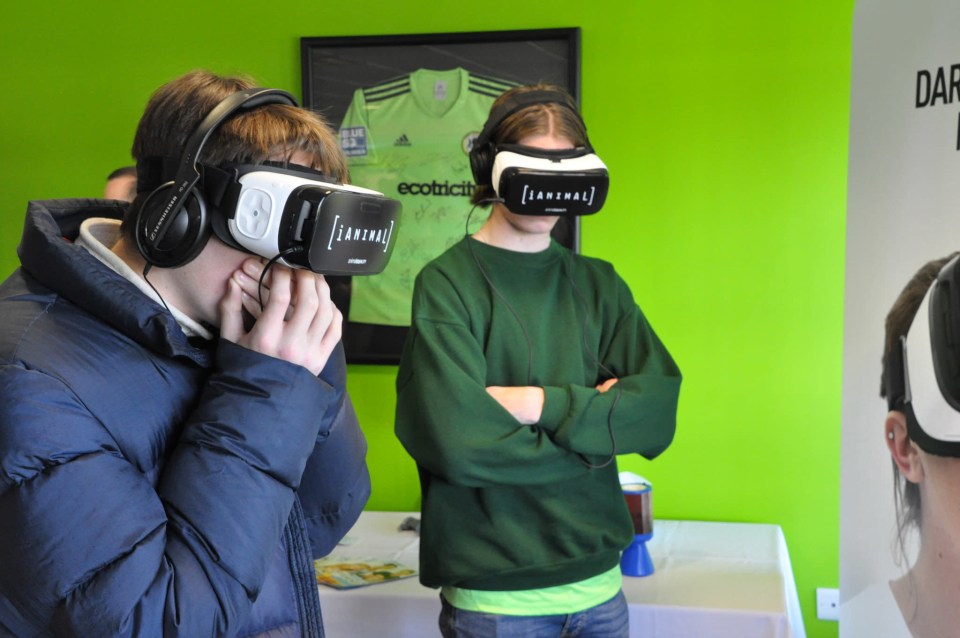 Barbarism. That's the best word to describe the events depicted in iAnimal, a 360-degree video that takes you inside a pig farm. Shot by animal welfare charity Animal Equality, the experience lasts seven minutes and may cause you to rethink the food you put on your plate.

Narrated by BAFTA-winning actor Peter Egan -- perhaps best known internationally as Downton Abbey's Hugh "Shrimpie" Flintshire -- it starts in a tiny cell, with not enough room to even turn around in. "You don't know what you're in for," says Egan, "but you're behind bars ... it's been this way for as long as you can remember." Rust is everywhere, and you're flanked by countless pigs on either side. First-person perspective is a tried-and-tested VR strategy, but I've never seen it used to such arresting effect.

The next scene shows a dozen or so piglets nursing from their mother. On the other side of the cage, a piglet lays motionless. It's not clear if it's asleep or dead, crushed under its mother's weight. The adult pig is pinned down by harsh metal bars. We then move to a piglet being held by its rear legs while it's castrated without anaesthetic. The film continues with grotesque scene after grotesque scene, charting the animal's life from birth all the way to slaughter. No matter your position on the meat industry, it's an extremely upsetting video.

While anyone can watch the film on YouTube, it's best viewed through a VR headset like Google Cardboard or, as I tried it, Samsung's Gear VR. If you're at a computer, I recommend watching the interactive tour instead. It's more informative and less emotive than the video itself, but without the immersion of a VR headset it's probably a better desktop experience.

Where iAnimal differs from many animal welfare videos (aside from its VR presentation), is that it's not the result of an undercover investigation, and the events depicted aren't illegal. Shot in the UK and other parts of the European Union, the footage was captured almost entirely with the permission of the farms, all of which are obeying the letter of the law. Everything you see can and does happen at perfectly legal farms on a daily basis.

I have always loved animals and worked at a veterinary clinic for several years after college. During that period, I slipped in and out of vegetarianism, but since becoming a journalist, I've managed to yet again disconnect meat from the animals that suffer for it. iAnimal brought me back to reality with a jolt.

Have I stopped eating meat because of the video? The short answer is "no" though I have changed my behavior a little. I've always tracked down "free-range" and "organic" meat whenever possible, but in the weeks since watching iAnimal, I've been substituting meat with vegetables in some meals, and cutting out non-free-range meat entirely. I've even become that guy who calls a takeout place to ask where their meat is sourced from.

I also solicited some advice on the various types of "free-range" labels for pork and which is best. Turns out, a lot of the labels are very sly in their wording. "Outdoor bred," for example, means that breeding sows live outdoors and give birth outdoors, which is great, but the pig you ate was actually taken away from their mother after a month or so and raised in a factory farm. "Outdoor reared" is the opposite: After month or so, pigs are reared outdoors, but they're born in factory farm conditions, and the sows are trapped indoors for their entire lives. In the UK, the best label to look for is Soil Association-certified organic, which means that pigs are born and raised outdoors. But even that isn't perfect: The pigs are still slaughtered in the same way as any other.

Animal Equality's executive director Toni Shephard made it clear that the organization does not endorse organic meat. "Some aspects of animals' lives are better on organic farms," Shephard clarified, "but ultimately they go to the same slaughterhouses and die in the same way as other pigs." Instead, its goal is to encourage people to give up meat or greatly reduce their meat consumption.

To that end, iAnimal has almost been a success, at least for me. I've probably not eaten meat more than four days a week since watching it and am attempting to transition to the right types of organic meats. So far, though, the video has mostly been preaching to the converted and a couple of curious journalists. Online, the Peter Egan-narrated version has more than 60,000 views while a second video narrated by No Doubt bassist Tony Kanal has around 15,000. Animal Equality isn't targeting online views, though. It's targeting people on the street. The organization has a number of Gear VR headsets and is embarking on a tour around the UK and US. It's starting with universities (the shot above is from University of California, Davis) and will then move to public demonstrations on the street, ideally in areas busy with shoppers.

Animal Equality's use of VR for iAnimal is extremely intelligent. Many people have never used a VR headset, and seeing someone wearing one is likely to make people stop and at least ask a few questions. And once they're inside the headset, they'll see an extremely powerful film in a medium that they may never have experienced before.

Building on the pig video, Animal Equality wants to create similar experiences for other livestock, building the iAnimal brand. The exact focus on the next video hasn't been decided, but just the thought of being stuck inside a factory farm chicken cage is already giving me nightmares.

Update: This article has been lightly edited to remove a quote that didn't correctly assert Animal Equality's position on the consumption of meat.

In this article: animalcruelty, animalequality, AnimalRights, av, culture, hands-on, ianimal, meat, pigs, pork, virtualreality, vr
All products recommended by Engadget are selected by our editorial team, independent of our parent company. Some of our stories include affiliate links. If you buy something through one of these links, we may earn an affiliate commission.