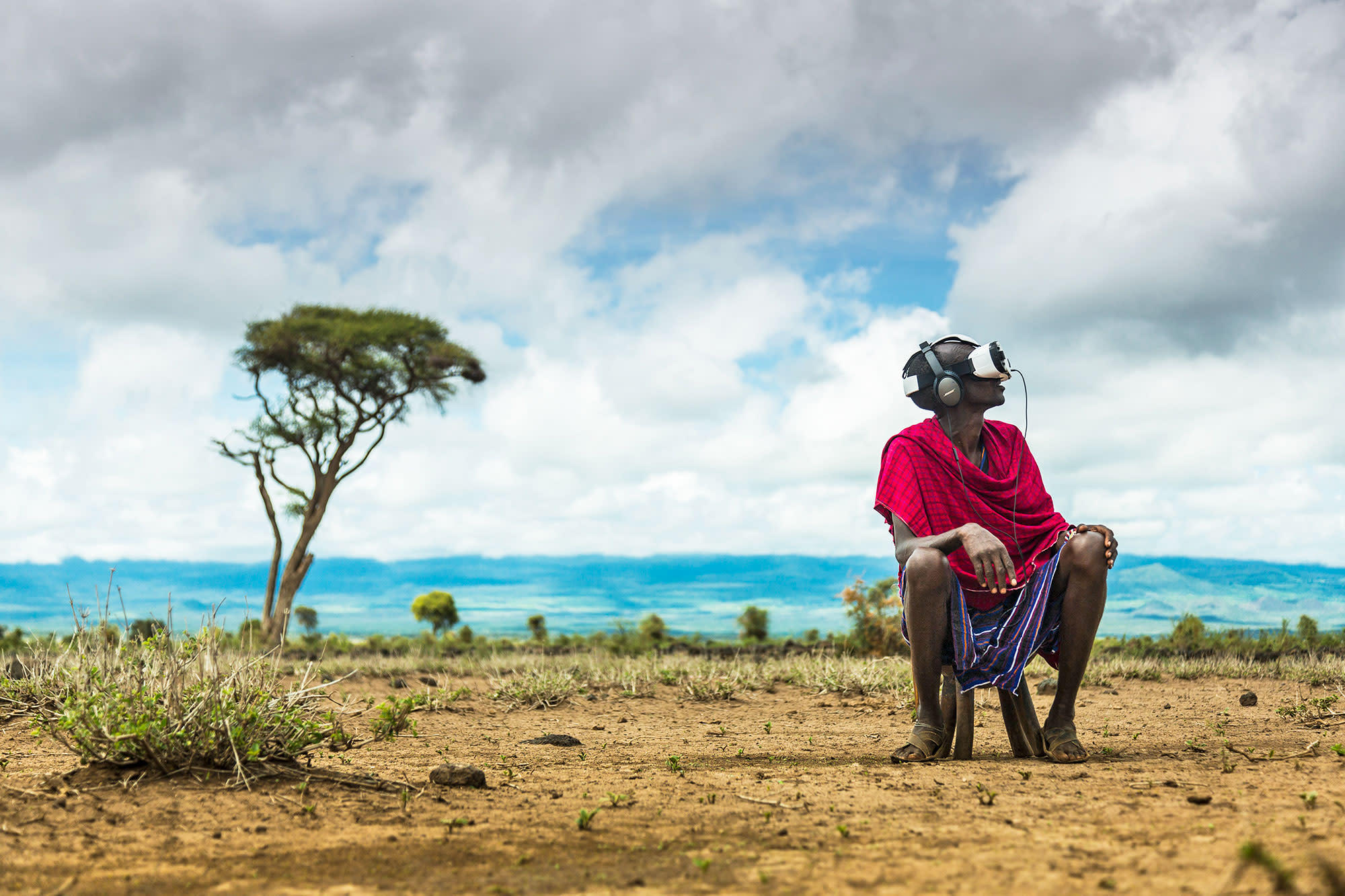 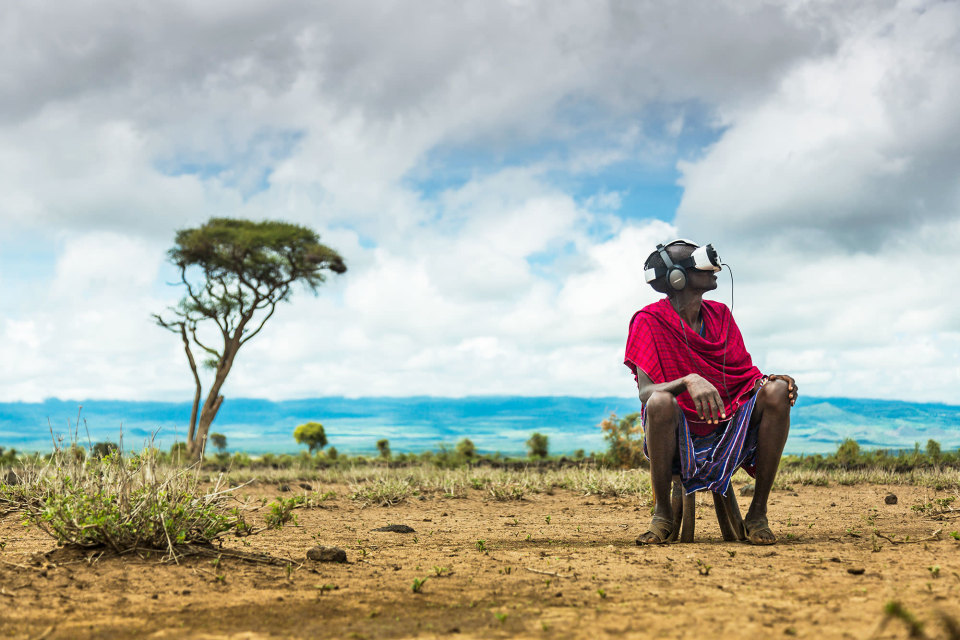 While full-fledged VR headsets like the Oculus Rift and the HTC Vive have gotten a lot of press lately, it's worth remembering that Samsung's Gear VR has been around for a lot longer. And due to its lower price and the fact that it only requires a phone, it's also a whole lot more accessible. That could explain why just six months after the consumer Gear VR launched, over 1 million people have used Gear VR in the past month alone, Oculus revealed today. The Facebook-owned entity took this milestone opportunity to not only introduce a slew of new video content but also give us an update on how mobile VR is progressing.

"Oculus' mission is to help people experience anything, anywhere," Max Cohen, Oculus' head of mobile, told a roomful of journalists this Tuesday. There's the high-end experience of the Rift, of course, but there's also the portable easy-to-use version of the Gear VR. "The secret [with VR] is it can't just be slightly better than other experiences that you've had," said Cohen. "It has to be even better."

Part of the reason why the million mark is so exciting, then, is because it'll hopefully push developers to create even more content for the platform. Cohen admits that it's sometimes daunting to get developers to spend time making VR content. "They tell us, 'Give us a call when you've a hit a million users.'" Well, now it has. Plus, Cohen says, the average time that users spend on the Gear VR is around 25 minutes a day. "They're highly engaged with the product," he says.

Aside from the number of users, Oculus is also working on increasing app discovery. There are over 250 apps for Gear VR right now, but finding new content can be a problem, especially for newcomers. That's why Oculus is rolling out a revamped Oculus Home design next month, which will hopefully make it that much easier to find recently downloaded content. You'll also see a "What's New" section starting this week plus an updated library that offers deep links directly into the apps. There'll also be a social element so you can see what your friends are watching or doing. In conjunction with the announcement, Oculus wants to highlight several new VR experiences. They include 6x9 (available now), a Guardian-produced film that lets you feel what it's like to be in solitary confinement; Notes on Blindness: Into the Darkness (available late June), which puts you in the shoes of someone who's slowly going blind; Tactera (available late May), a real-time strategy game with holographic pieces; and last, Nomads (available today), which lets you explore what it's like to be in different nomadic tribes such as the Maasai in Kenya, the yak herders in Mongolia and the sea gypsies in Borneo. Nomads was produced by Felix & Paul Studios, which has done other Oculus content such as Jurassic World and Wild.

Additionally, Oculus has been working on a partnership with Discovery to develop a new Deadliest Catch VR experience that'll put you on the rough seas as a virtual crew member. It'll launch next week, on May 17th. There'll also be an experience called First Life, which is narrated by renowned naturalist David Attenborough. It promises to transport you 500 million years into the past and give you a firsthand look at prehistoric sea creatures.

If it seems like there's an unusual number of video experiences on this list, that's no coincidence. Seven of the top 10 most-used apps on Gear VR are video-related. Eugene Wei, the head of video at Oculus, says that over 2 million hours of video are consumed on the mobile headset. That includes the usual 2D movie experiences that you can watch in a virtual cinema (either via Oculus Video or a Netflix VR app) or live 180-degree streams of events like the Kentucky Derby. "But when most people talk about video and VR, they think 360-degree video," he says. "It's continuing to gain momentum." But the problem with 360-degree content is that there's a high barrier to entry. Creating VR video is not the same as regular video; there's still a lot that filmmakers have to figure out. It's why Facebook released the blueprints for the Surround 360 camera: not because it wants to be in the 360-camera business but because it wants more people to create content. "Our goal is to get this camera into the hands of as many creators as possible," says Wei, adding that the team has also worked to integrate consumer-level cameras like the Gear 360 and the Ricoh Theta S with the ability to upload directly to the Facebook News Feed.

There's also the issue with how much bandwidth 360-degree video takes up. To get around that, Facebook developed a technology called Dynamic Streaming that increases the quality of the video you can see but degrades the video that's offscreen. The improved display resolution of the recent Samsung phones is also integral to the Gear VR experience. "[1440p OLED screens] might not matter on a traditional phone," says Wei. "But when it comes to VR, it really makes a difference in the quality of the experience."

Storytelling in VR is also pretty different from traditional mediums. For example, take the opening credits of Game of Thrones that was created in 360-degree video. If you watch it on your phone or on your computer, it retains that same camera-swooping motion you see on TV. But put that same experience on a headset and it starts to feel a little strange. That's why Oculus is now working on creating a special VR headset experience of the Game of Thrones title sequence that would put you in the middle of King's Landing so that you'll be able to see the buildings sprouting up around you. "It's an example of the visual grammar that people have to learn," Wei says. "We have to have creative collaboration with creators to help them understand [these new] design constraints." Right now most VR video content is still on the short side: maybe a few minutes at most per clip. That's mostly because it's cost-prohibitive to create a two-hour 360-degree movie. But Cohen and Wei say there has been some legitimate interest from filmmakers on how to do exactly that. "I've heard of a few film directors who want to tackle that," says Wei. "I'm excited to see what happens."

Wei also wants to emphasize that 360-degree content isn't unique to video. He says that in the coming weeks, Facebook will announce support for 360-degree photos as well. You can either shoot and upload panoramic photo spheres with your phone or use one of the aforementioned specialized cameras.

"There's this underlying belief that a mobile platform is fundamentally unserious," says E McNeill, the creator of Tactera and Darknet, both of which are video games designed for the Gear VR. "I think that's a mistake ... The Gear VR really punches above its weight. Once you have the headset on, you're not squinting at a small screen. It's VR." Plus, Cohen says, a lot more games are making the jump from Gear VR to the Rift and vice versa, thus adding legitimacy to the platform. Dragon Front, for example, is a game that will launch concurrently on both the Rift and the Gear VR.

"Think about the kids learning five, ten, fifteen years from now," says Cohen in regards to the Nomads VR experience. "They're not going to be using textbooks when they can experience firsthand what these people went through. It really creates this kind of emotional connection."

"We want to get mobile VR in the hands of as many people as possible," says Cohen. "We think we can actually change people's lives." It's an admittedly grandiose statement. But it seems that at least 1 million users are intrigued enough to give it a go.

In this article: culture, entertainment, facebook, gaming, gear, gearvr, oculus, oculushome, personal computing, personalcomputing, samsung, samsunggearvr, vr, wearables
All products recommended by Engadget are selected by our editorial team, independent of our parent company. Some of our stories include affiliate links. If you buy something through one of these links, we may earn an affiliate commission.