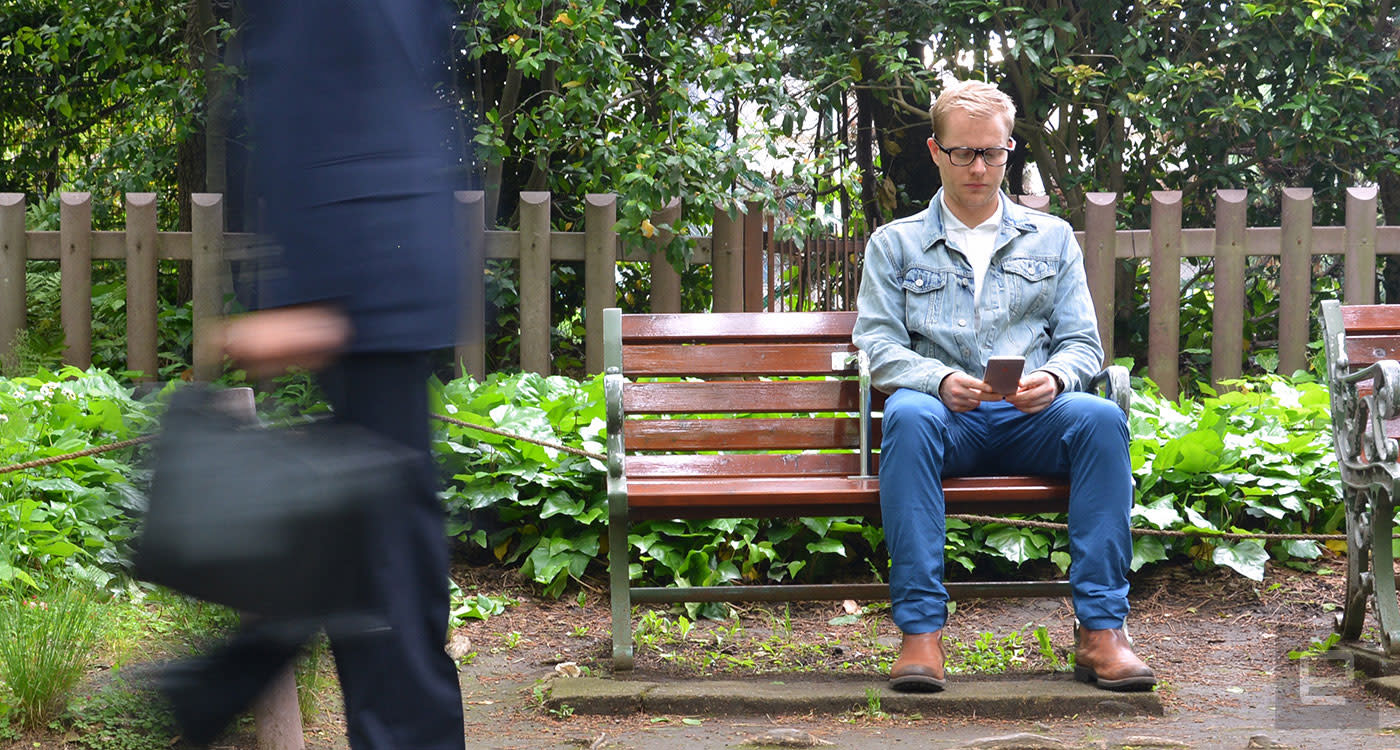 These Japanese smartglasses are trying to teach me zen

I'm on the subway, my head tilted downward to face my phone. I blink five times, I put my hand on my tummy to "feel" my breathing. To casual onlookers, I look suspicious as hell (or about to cry), but I'm meditating -- so please leave me alone. Yes, there's no lack of meditation apps on both iTunes and Google Play, but a wearable that monitors your body's reactions and offers feedback is rarer. JINS Meme is a pair of Japanese-made smartglasses that look pretty much like normal glasses. I've trained with them and run with them, and now the latest app for the specs is trying helping me to chill the eff out. JINS Meme look just like a pair of glasses, albeit with chunky arms, fortunately avoid the jarring appearance of other gadgets that use sensors to measure your brainwaves. That said, they're sometimes a little uncomfortable due to the high-tech nose-bridge that's monitoring the electromagnetic field created by your eye movement (crazy, right?). And you need to recharge them pretty regularly.

About that nose-bridge: It's made of three contacts that detect and extrapolate your blink frequency as well as the movement of your eyes based on tiny electromagnetic differences caused by your very eyeballs. JINS, the Japanese spectacle maker behind the smartglasses, cites scientific research that shows the frequency and intensity of our blinks give a good representation as to how well we are focusing.

The app makers themselves suggest you can use the meditation software (almost) anywhere. So I did.

The "zen" meditation app is different from everything else I have tested with these smartglasses. I didn't need a change of clothes, trainers or somewhere with some degree of privacy -- I just needed my phone, JINS Meme and a pair of headphones to listen to the meditation instructions. The app makers say you can use the meditation software (almost) anywhere. So I did.I used it on my commute into work, skipped a half-hour of work (for research) and tried it at home, all in search of chill, if not Netflix.

The app is divided into two meditation classes: one for relaxation and focus, the other for improving creativity. The first, simpler class is called "Focused Attention" and asks you to gaze on an ever-decreasing circle displayed on your phone -- best practice is to place the phone on the floor or table roughly 50 cm ahead of you. The audio-based narration guides you through the short session, reminding you to concentrate on breathing, maintaining good posture and listening to the noises around you.

The last part doesn't work so well good in the office or on the train, but it's comparable to a relaxation tape, albeit in Japanese. After you complete it once, you unlock longer meditation sessions up to 10 minutes long. A free mode also allows you to plot lengthier sessions, although this lacks the dippy calming narration of the level-based meditation sessions.

The second class, "Open Monitoring", is a higher-level training exercise that has additional white noise and faux murmuring and ocean noises aimed at pushing your creative boundaries. It's hard to empirically measure if Open Monitoring made me more creative, but subjectively, I felt it invigorated me (I was energized, less distracted) more than Focused Attention.

Relaxation is a complicated thing: graphing may help quantify but that doesn't mean it's an effective feedback mechanism.

Both features use the Meme smartglasses to gauge your breathing, mindfulness and posture. While you get scored on using each, the point isn't to consciously aim for a high score. Relax, Mat. Relax. I found the individual scores pretty arbitrary, perhaps because meditation is hugely subjective and personal; when I felt I was particularly relaxed, the scores didn't reflect this. Relaxation is a complicated thing: Graphing may help quantify it, but that doesn't mean it's an effective feedback mechanism.

I found the advice offered after each session far more useful. It suggested I push to concentrate through the entire five-minute session (which is difficult when your train stop is just three minutes away) and reminded me to sit up straight. Yes, I was slouching. The main aim is to get into a "focus" red zone, in which each score contributes to a total that the app deems a high level of concentration. After a week or two of use, I was starting to hit this area with some regularity. Unsurprisingly, a quieter environment helps -- just because you could meditate on the side of the highway doesn't mean you should.

I've tried some relaxation apps before, and even some posture wearables that irritate with notifications when I'm not sitting properly. However, setting aside five minutes a day to meditate and receive feedback on how my body is reacting seems a much more effective way to improve my outlook and posture at the same time (and all without any incense or soothing forest sounds playlists). It's never going to make me completely stress-free, but five minutes was more than enough for me to claw back some degree of calmness and centeredness. That is, as long as I remembered to charge the smartglasses the night before.