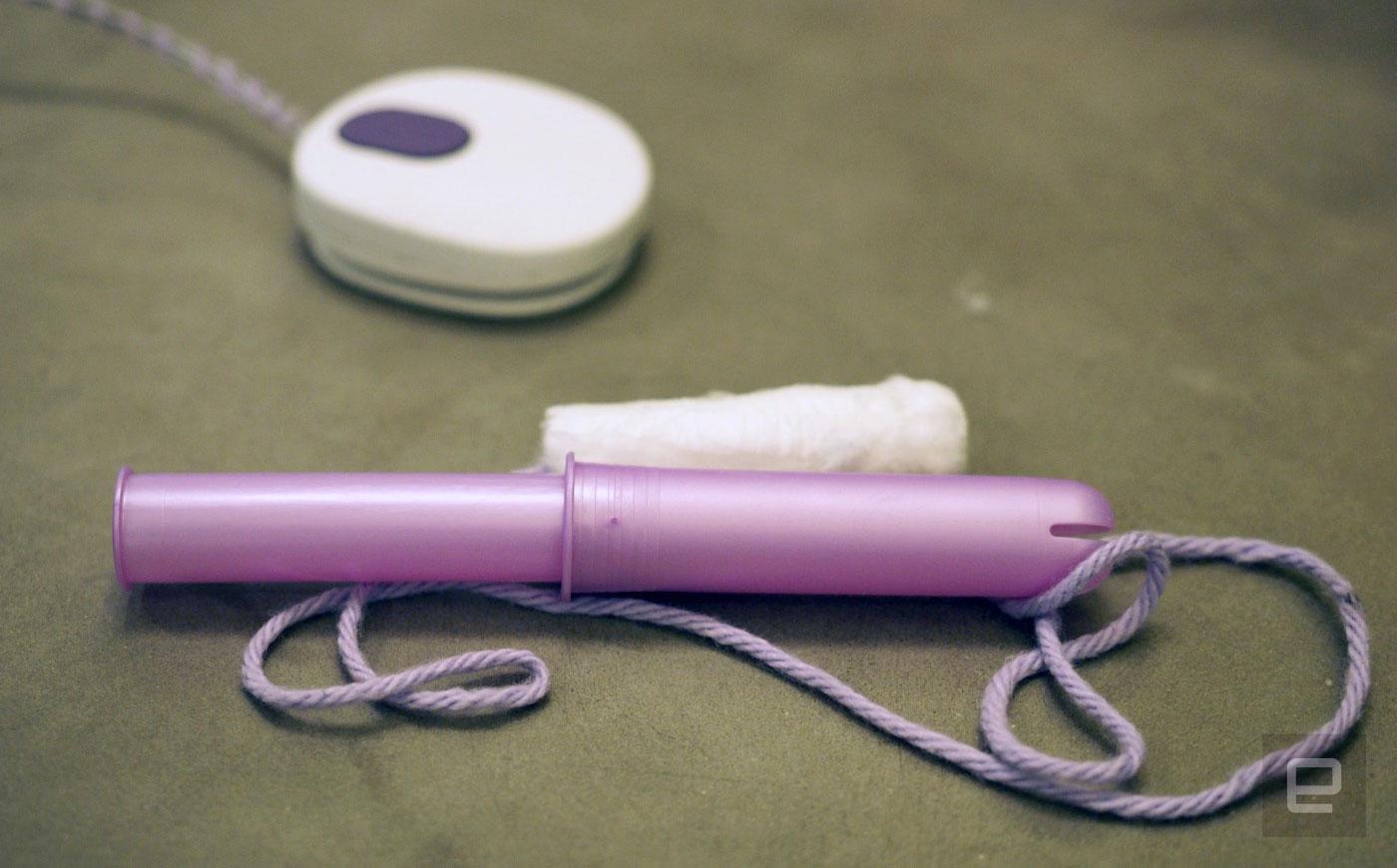 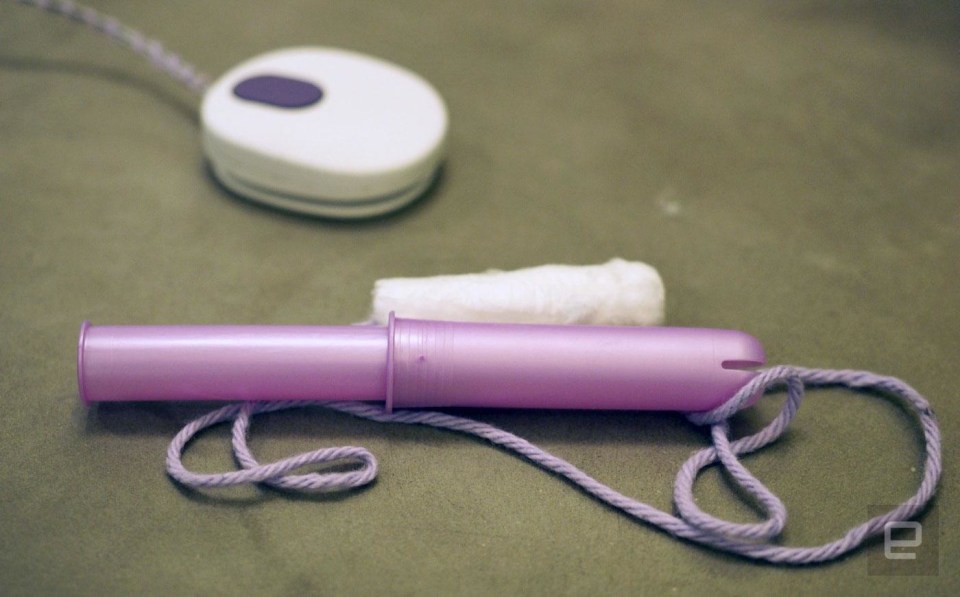 ​I wasn't surprised two weeks ago when I was invited to see an early demo of a so-called smart tampon. I am, after all, one of few women who write for Engadget. Indeed, as I would later find out, the founder of this startup, called my.Flow, had no plans to meet with male reporters ahead of her product's launch. And that makes sense: It's a product by a woman, for women, that she believes women will "get." None of us need to be told what a nuisance menstruation can be, or that we risk life-threatening complications when we leave our tampons in too long.

The problem is, I'm a woman, and even I don't get this thing.

Though the initial email I received described it as a "smart tampon," this is, in fact, a bit of a misnomer. The tampon itself looks like any other tampon, complete with a plastic applicator. There's no circuitry inside, so in that sense, it's dumber than its name implies. Instead, an insulated (and very long) string connects to a small sensor that the wearer clips onto her underwear or waistband. The sensor then talks to a smartphone app that sends notifications when the tampon is nearly saturated. Over time, too, the app can predict when a woman's period will start, how long it will last and what her heaviest-flow days will be.

The idea is to help women avoid embarrassing surprises -- the sort of leaks you'd see if you neglected to change your tampon or weren't expecting your period to start that day. My.Flow is also trying to prevent toxic shock syndrome, a rare but potentially fatal complication sometimes caused by leaving a tampon in too long. Conversely, says the company, if the cotton has barely absorbed any blood, a woman can avoid the discomfort of having to remove a dry, unlubricated tampon.

These are noble intentions. Women still get toxic shock syndrome, and sometimes they die from it. But TSS is less common than it used to be — or at least, bacteria-infested tampons are less often to blame. According to the Mayo Clinic, since tampon makers took certain superabsorbent tampons off the market, there have been fewer recorded cases of menstruating women contracting the illness. Also, these are all problems that can largely be solved with common sense. The cases that occasionally make headlines are about women who, say, forget about the tampon and leave it there for nine days. Don't fucking do that. The packaging on most tampon boxes says you shouldn't leave one in for more than eight hours, and even those of us who don't always read the fine print can probably recall hearing at least one warning about toxic shock syndrome.

I don't actually know how one forgets about a tampon, and it's also not that hard to remember to change it before the workday is done. And, precisely because tampon makers have discontinued their most absorbent models, the ones available today are going to get saturated more quickly. If you've been menstruating for decades, you've probably gotten the hang of changing your tampon before there's any actual leakage. But even if you're a newbie, a little spotting in your underwear would be clue enough that it's time for a fresh one.

Leakage, by the way, is a more likely problem. Accidents happen, even to the most seasoned among us. Again, though, common sense goes a long way. Not all of us have predictable periods, but for many of us, everything runs like clockwork after a while. (That's especially true for women on the pill, which tends to make periods lighter, shorter and more regular.) For my part, I'm turning 32 and have been menstruating every month for nearly 20 years. Even without the help of an app, I know when my period will start, which days will be the heaviest be and how long on each day I can get away with leaving a tampon in. If you're less experienced (or just more risk-averse), it's possible you're using a pad or panty liner as backup, or substituting it for a tampon altogether. As for the discomfort of removing a tampon prematurely, I don't personally think it hurts; the discomfort (if you can even call it that) is fleeting. But if you disagree, you might not be as much of a tampon person in the first place.

To be clear, I do believe there's room for advancements in the way women manage their periods. And there are startups doing great work there. Thinx makes absorbent underwear that can take the place of pads and tampons. Lola is a website selling tampons as a subscription, saving women trips to the pharmacy. (You could do the same through a site like Amazon and subscribe to a wider variety of toiletries while you're at it.)

Then there's Looncup, the smart menstrual cup announced last year. Like my.Flow, it could be accused of putting tech in a woman's vagina for tech's sake. But I would wager that particularly because menstrual cups are a newer invention than tampons, many women (myself included) are more nervous about an overflowing cup than a saturated tampon. For what it's worth, the Looncup also monitors your health in ways my.Flow can't, with sensors that can tell if your discharge is an unusual color.

In any case, all of these companies aim to make women's lives easier, and also help remove the stigma that can make it uncomfortable to talk about menstruation in the first place. My.Flow also tries to normalize periods — in fact, founder Amanda Brief tells me the reason the device is purple is that it's closer to the color of menstrual blood than the sterile blue liquid used in maxipad commercials. This is fantastic: I am sincerely glad to see startups working on products like this. But my.Flow, in particular, isn't especially convenient. The prototype sensor I saw was large — about the size of my palm. It's definitely bigger than other gadgets I might clip onto my person, like an iPod Shuffle or even the original Fitbit. Are you there, God? It's me, vintage period tech. [Image: Mum.org]

If clipping the sensor onto your waistband feels too clumsy (or you want to go swimming), you can slip the sensor inside a custom key fob, but then it won't be actively monitoring your flow; you'll need to plug it into the tampon string at some point for it to get a read on how you're doing. In that sense, it's more cumbersome than the Looncup, which otherwise works like a regular menstrual cup. As high-tech as my.Flow tampons are, I can't help but think of the sort of sanitary belts women wore 50 years ago to hold their pads in place. There's no reason for a tampon -- or a pad, for that matter -- to still require two pieces.

My.Flow tampons are not available yet. The company is seeking seed funding, with hopes of launching a commercially available product sometime next year. If and when that happens, the sensor will cost a one-time price of $49 (about the median cost of a menstrual cup), with the battery rated to last "years," according to Brief. The tampons themselves will be sold online, as a subscription, and at $13 or so, they'll be more expensive than competing products (a 50-pack of Tampax costs around $10 on Amazon).

I'm less interested in whether the (largely male) venture-capital community thinks this is worth funding. I mainly care about whether there are women out there who would buy such a thing. And I'm not convinced there are. The My.Flow tampon was born out of a group project in one of founder Amanda Brief's masters-level engineering classes at UC Berkeley. The assignment was to create a wearable and indeed, the product is a good proof of concept.

But I suspect that the hardware itself will need to become less intrusive if it's going to succeed. The advent of self-adhesive maxipads in the '70s led to the extinction of the ol' sanitary belt, making it (in my humble opinion) one of the greatest inventions of 20th century. Twenty-first-century menstrual gear doesn't need to be high tech, but it, too, should strive to make those few days of the month easier.

In this article: amandabrief, culture, editorial, gear, HAX, haxlr8r, menstruation, myflow, period, periods, science, smarttampon, tampon, tampons, wearables
All products recommended by Engadget are selected by our editorial team, independent of our parent company. Some of our stories include affiliate links. If you buy something through one of these links, we may earn an affiliate commission.
Share
Tweet
Share