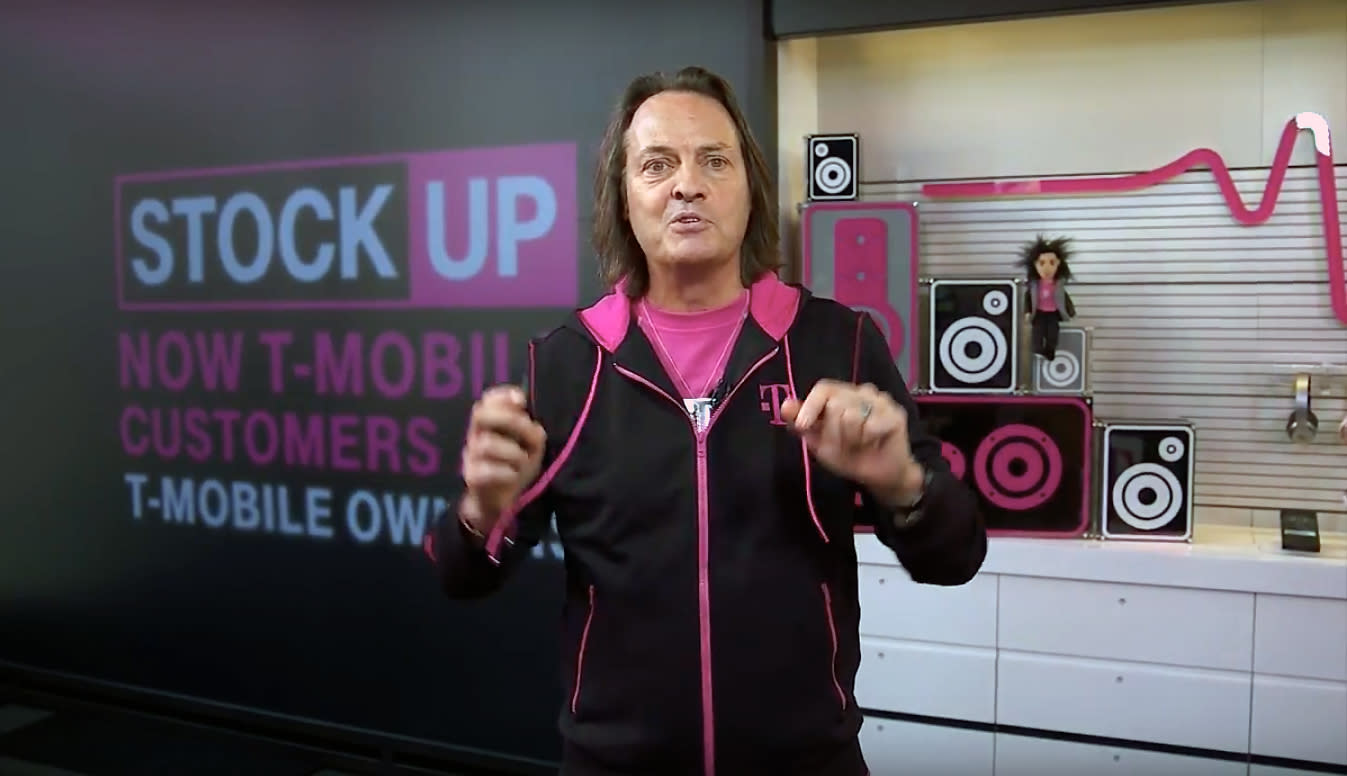 John Legere has spent basically his entire tenure as T-Mobile CEO sweetening the deal for new and current customers, and today his largesse took a very peculiar form. As part of the newly announced Uncarrier 11 initiative, T-Mobile launched StockUp, a new rewards program that grants one share of company stock to every T-Mobile primary account holder. Those folks can bank up to 100 shares a year by referring their friends -- not too shabby, considering shares are currently valued at $43.62 and T-Mobile's strong financial growth could nudge that number even higher.

The deal is even sweeter for long term loyalists: customers who have been around for at least five years get two shares for each newcomer they refer. Legere joked that T-Mobile customers are collectively his boss now, but don't get any ideas -- there are probably some stringent financial mechanisms in place you keep you and a few hundred thousand friends from staging a hostile T-Mobile takeover.

There are a few caveats to be aware of, though. This deal is only for consumer postpaid subscribers, and you're out of luck entirely if you use T-Mobile subsidiary MetroPCS.

Legere live-streamed the news from New York City, an event that also saw the company roll out another rewards program called T-Mobile Tuesdays. Every week, the company plans to give out freebies through a T-Mobile Tuesdays app that's now live in Apple's App Store and the Google Play Store. Legere says the program includes "food, movie tickets, gift cards, subscriptions, ridesharing and more," though the first week's gift is a free ticket to go see Warcraft. Considering the reviews we've seen so far, you might want to see what comes free next week instead. On the flip side, you'll also be able to access recurring freebies like free Vudu video rentals and medium Domino's Pizzas.

Oh, and to ease the intense boredom that sets in on long flights, T-Mobile customers will get one hour of free Gogo in-flight wi-fi and free in-flight messaging on iMessage, Google Hangouts and Viber for the duration of your time in the middle seat.

In this article: carrier, gear, mobile, stockup, t-mobile, uncarrier, uncarrier11, wireless
All products recommended by Engadget are selected by our editorial team, independent of our parent company. Some of our stories include affiliate links. If you buy something through one of these links, we may earn an affiliate commission.