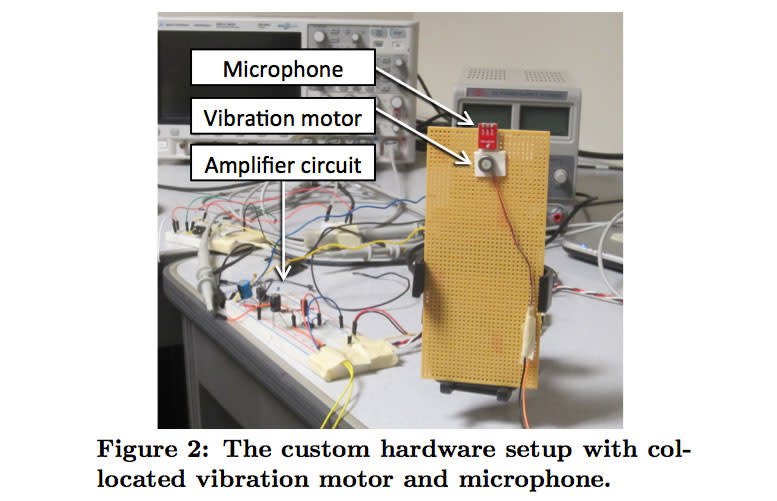 On the list of things that might be eavesdropping on your day-to-day conversations, the tiny motor that makes your phone buzz isn't necessarily the first one that comes to mind. But that is exactly what happens with the VibraPhone -- a proof-of-concept device created by two researchers from the University of Illinois at Urbana-Champaign to show that the motor in your smartphone or fitness tracker can be re-wired to act as a serviceable microphone.

The concept is fairly simple: the motor uses electric current to change a magnetic field that makes the vibrating mass move, like a clunky, low-frequency speaker. A microphone does the reverse by translating sound wave vibrations into electrical current with a magnetic diaphragm. In their research, Nirupam Roy and Romit Roy Choudhury of the University of Illinois at Urbana-Champaign show that the vibration motor can be similarly affected by sound wave vibrations in the air.

"We show that the vibrating mass inside the motor, designed to oscillate to changing magnetic fields, also responds to air vibrations from nearby sounds," the team wrote. While the concept makes sense, it's actually the quality of the recording that is surprising. According to Roy and Choudhury, "the fidelity to which this is possible has been somewhat unexpected." Despite the fact that the motor/microphone can only pick up frequencies lower than 2 kHz, the research team was able to devise a process that could reconstruct a complete spectrogram. (There are more audio samples available on the project site.)

Now, before anybody starts ripping the vibrating motors out of their phones, TechCrunch is quick to point out that this hack currently requires someone physically take apart a phone and rewire the motor to connect it to the phone's audio system. But, as Roy explained, it may also be possible hack the power controller chip to collect the necessary voltage information to rebuild an audible waveform. And there's also the possibility of hijacking the feedback motor in other devices like fitness monitors.

Still, Roy and Choudhury don't see their VibraPhone tech being used for nefarious purposes. Instead, they are investigating whether the concept could be used to "recover speech from the subtle vibration of vocal cords, facial bones or skull" to create an "assistive system for persons with speech impairment."

In this article: mobile, phonehack, science, security, vibration, vibrationmotor
All products recommended by Engadget are selected by our editorial team, independent of our parent company. Some of our stories include affiliate links. If you buy something through one of these links, we may earn an affiliate commission.