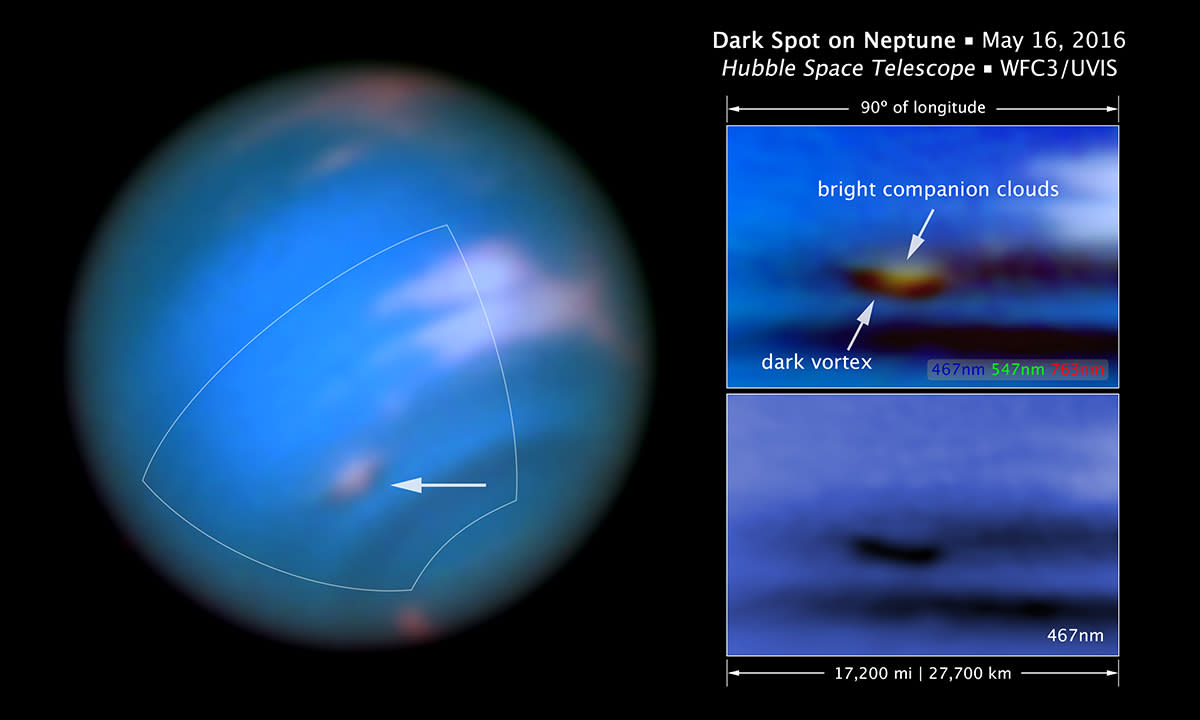 Researchers gazing through NASA's hardworking, time-bending Hubble space telescope spotted a new storm brewing on Neptune last month. As the space agency confirmed today, research astronomers analyzing telescope data at the University of California at Berkeley discovered a new "dark spot" on the planet — only the third since Voyager 2 first spotted one in during its 1989 flyby.

The dark spots or vortices are actually high-pressure weather systems and they accompanied by bright companion clouds, presumed to be methane crystals formed when the surrounding air is pushed up over the vortex. In this case, it was the companion clouds that were spotted first and pointed researchers towards the dark spot itself.

Also like Earth's weather systems, the dark spots are constantly changing in terms of size, shape and stability. Unlike those on Earth, however, they can last for years and the vortex spotted by Voyager 2 was actually about the same size as the Earth itself.

Finally, in other Hubble news today, NASA announced they'll be extending the contract for science operations on the space telescope. With the extension, Hubble will continue to be in service through at least June 30, 2021, although NASA believes it will continue to be "an outstanding general purpose observatory" well into the 2020s thanks to some upgrades performed by shuttle astronauts back in 2009. In 2018, Hubble will be joined in orbit the James Webb Space Telescope, which will become our new flagship observatory in space.

In this article: darkspot, darkvortex, hubble, hubblespacetelescope, NASA, neptune, science, space
All products recommended by Engadget are selected by our editorial team, independent of our parent company. Some of our stories include affiliate links. If you buy something through one of these links, we may earn an affiliate commission.