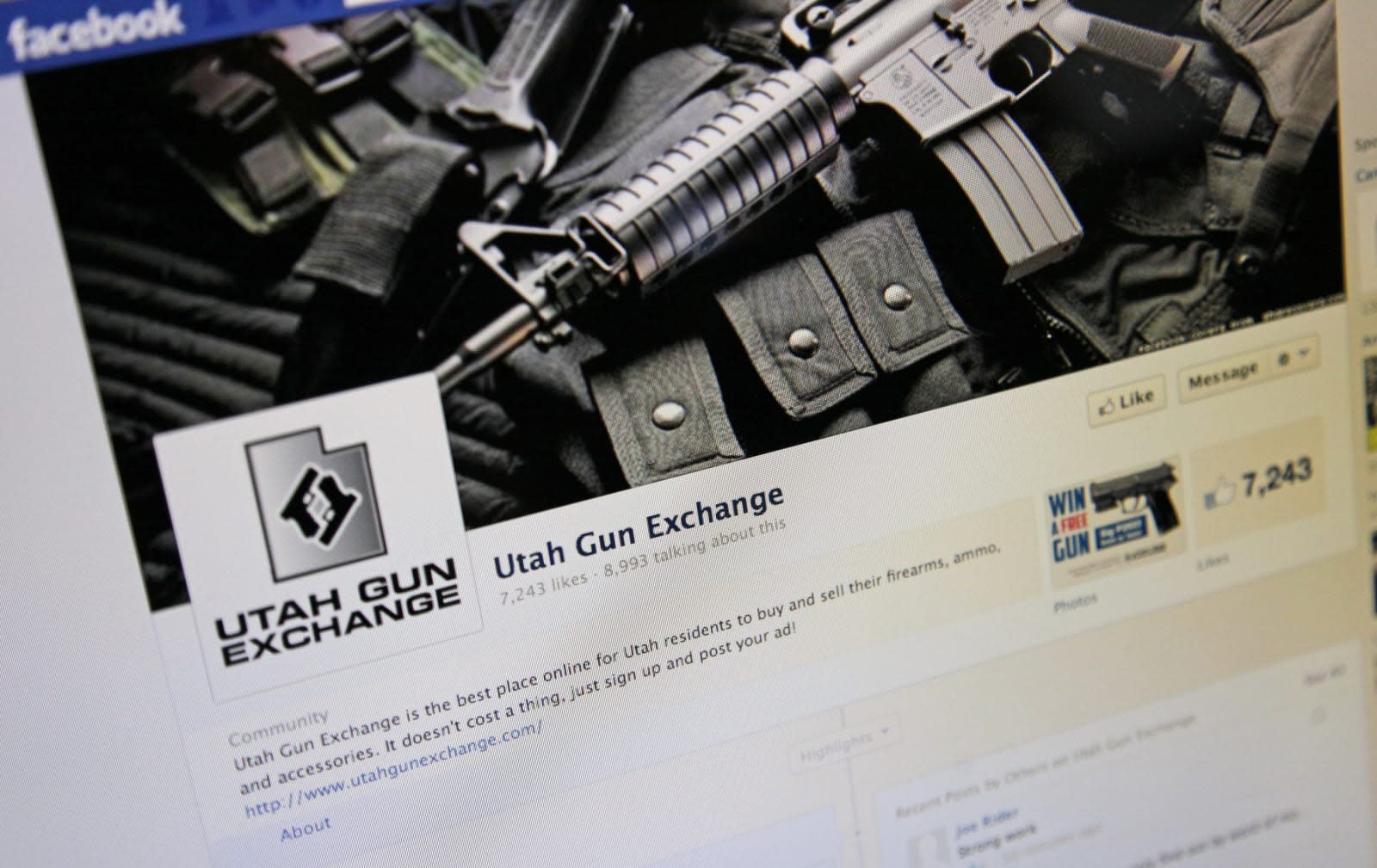 There's a whole bunch of content that you aren't allowed to post on Facebook. Threats against public figures and other users, claims of imminent self-harm, harassment and bullying (in theory, at least) and the purchase, sale or trade of regulated goods like drugs and weapons. What's more, Facebook made a subtle change to its Community Standards back in January, effectively banning the peer-to-peer sale of firearms, ammo and explosives. Firearm shops and online retailers are still allowed to promote offline sales on Facebook -- assuming all applicable laws and regulations are met -- but private citizens can no longer offer their own weapons on the site. While this is a commendable policy shift on FB's part, the site's enforcement of the new rules has been spotty at best.

See, Facebook doesn't actively police its site for offending content. There's no team of staffers or automated algorithm scouring for infractions. Instead, Facebook relies entirely on the user community to report banned content. Once a post, image or group is flagged by other users, a Facebook team will review the content and take the appropriate action: removing the content, temporarily suspending the user's ability to post, shutting down the group wholesale or any combination of the three. In all, Facebook receives roughly 1 million reports each day, according to Forbes, though there's no word on how many of those are gun-related.

"Facebook relies on the community of 1.6 billion people on Facebook to report anything -- posts, photos, videos -- that violate our terms, including our policies on firearms," a Facebook rep told me during a recent phone call. "Given the volume of content shared each day, we believe this is an efficient way to identify content for review. Closed and secret groups are subject to the same policies, and we receive reports for content in these groups as well." Of course, content within closed and secret groups are only visible to their existing members -- not the larger FB community -- so they're basically expected to regulate themselves.

This method of enforcement does not sit well with a number of Facebook users -- especially Mike Monteiro, design director at Mule Design. For the past few weeks, Monteiro has advocated that users seek out and report groups and users that continue to flaunt the Community Standards and engage in peer-to-peer firearm sales. "We're not trying to get anybody to change their stance on anything," Monteiro told me. "We're trying to get Facebook to do what they said they were going to do."

To date, he estimates that more than 1000 groups have been shut down for gun-sale violations -- in no small part due to the efforts of John Sibley. "I have no idea how he's doing this and I never met him before this," Monteiro said. "The amount of pages that he's managed to get shut down is amazing."

Not everybody is happy with Monteiro's efforts, mind you. "I've got an inbox full of death threats," he said. "None of it surprised me; I'm not going to lose any sleep over it. Most of these guys -- and it's always guys -- are coming in with their 'good guy with a gun' arguments and immediately issuing death threats."

Of greater concern to Monteiro are the actions of Facebook's director of engineering, Chuck Rossi. As a recent Forbes article illustrates, Rossi has used his position and influence within the company to actively undermine the new gun-sale rules and help to get a number of banned gun sale groups reinstated.

"I am 100 percent laser-focused on getting your groups back to you so you have a chance to get them to comply with the new policy. It is my sole freaking purpose in life until it is done. I'm dumping extra work on my managers and my teams to cover for me while I take on this new role," Rossi wrote in a February post to Admin Contact, a private assembly of FB administrators working on behalf gun-themed groups. "I know this new policy sucks. I personally don't agree with it, and everyone in Facebook is pissed about how it was rolled out."

Rossi has reportedly managed to reinstate as many as 80 percent of gun-related pages removed in the past three months, an Admin Contact administrator told Forbes. "I'm not sure how somebody gets to keep their job" when he goes against his employer's publicly-stated policies, Monteiro said. "He's not just disagreeing with it, he's saying 'I'm going to make sure the policy doesn't work.'"

Whether this method of community-based policing will actually be effective in the long term remains to be seen. It could well become a game of Whack-A-Mole, with pages and groups being shut down for violating the Community Standards only to immediately resurrect themselves and continue on as if nothing happened. Either way, the battle over guns on Facebook -- like the larger issue of gun control in America -- doesn't look like it will be settled anytime soon.

In this article: business, communitystandards, culture, facebook, firearms, guns, mikemonteiro, politics, rifles, sale, security, trade
All products recommended by Engadget are selected by our editorial team, independent of our parent company. Some of our stories include affiliate links. If you buy something through one of these links, we may earn an affiliate commission.