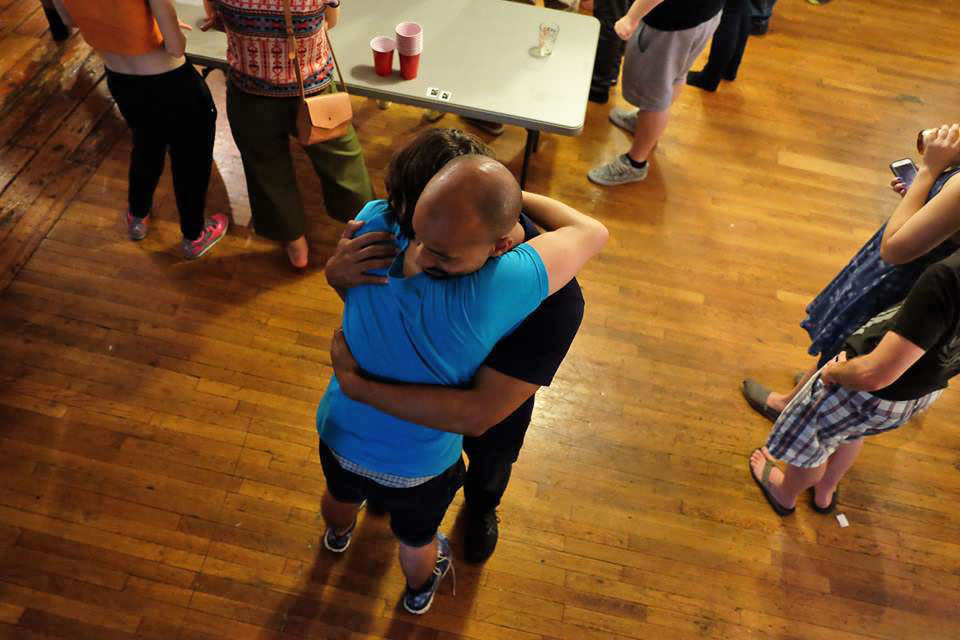 Whenever a developer at the Philly Game Forge finished a project and shipped it off for the harsh scrutiny of the wider world, everyone would gather around, raise a glass and recite the following chant:

The code is done
The tweets are sent
The game is out the door
So now we'll drink
And drink and drink
And then we'll drink some more.

This chant offered camaraderie for the developer and a dash of self-deprecating humor before a flood of public attention, but mostly it signaled the end. The end of a game's development. The end of months -- or years -- of work. The end of an era.

On Thursday, June 30th, the chant signaled the end of something even larger: the Philly Game Forge itself. For four years, the Philly Game Forge was the hub of independent game development in Philadelphia, and it was a regular meeting place for anyone interested in video games. Dozens of developers worked out of the space daily, and it hosted a weekly public meet-up called Philly Dev Night. More than 100 developers, artists and enthusiasts showed up to each event, on average. The Dev Night hosted regular game jams, and over the years, numerous independent studios sprouted up around the city, rooted in relationships seeded at the Philly Game Forge.

Philly Dev Night hosted one game jam a month, challenging local developers to build something from scratch and present it to the community for judging. Sometimes these games would become something larger, such as commercial products, or spark ideas for new features in existing projects. The jams were a chance for developers to flex their creative muscles and try new things. Roughly six games would come out of each Dev Night jam, meaning the Forge spawned 72 games a year from this monthly meetup alone.

Some of these games went on to be featured at major festivals like SXSW and IndieCade. The post-Dev Night success stories include Monster Want Burger, SoulFill, Henka Twist Caper, Tailwind, the card games Resistor, Mahou Shojo and These French Fries are Terrible Hot Dogs, plus the board game Yomi's Gate.

One challenge, the Profit Jam, gave teams one month to create their games and two weeks to sell them; the team that generated the most profit won. Some groups raked in thousands of dollars. And this doesn't count the work developers did during the day, creating and supporting games like Jamestown: Legend of the Lost Colony, Domino!, Dragon Fin Soup and Monsters!

Despite these successes, lack of funding forced the Forge to close its doors for good late last month. Its founders held a massive goodbye party on the evening of June 30th, where members read speeches on stage, signed a giant Game Forge poster, danced all night and said goodbye to a space that many of them called home.

"I cried. A lot," recalled William Stallwood, one half of Auditorium studio Cipher Prime and co-founder of the Philly Game Forge. "In fact, I couldn't even stay all night; it was just too emotional for me. Sometimes, it's incredibly hard to see how the things you do impact other people. I never knew or realized what an impact the things we've been doing have had. I'm so incredibly grateful to have been able to travel this beautiful journey in my life."

On that massive poster covered in doodles and goodbyes, one person left a simple message: "The Forge saved me." These words resonated with Stallwood on a deep level.

"But damn if I didn't cry during the closing party," Saint said. "And it wasn't even the loss of the space that did it -- it was the stories of success and inspiration. On that signed poster, Andy Brown said, 'Because of the Forge, I never gave up,' and I'm tearing up now just thinking about that. How amazing is that feeling? That's something only teachers and parents get to feel, and I'm lucky enough to get to feel it now." Flyclops, the studio behind Domino!, was the first company to grow up and graduate from the Philly Game Forge, and Stallwood estimates it's the highest-grossing game studio in Philadelphia. Domino! has more than 1 million installs on Google Play alone, plus it's available on both iOS and Facebook.

The Forge was a force to be reckoned with in Philly. Stallwood said Dev Night began with just 10 people or so, but it blossomed into a booming, productive party.

"This is incredible for the only US city that doesn't have a AAA game studio in or around it," Stallwood said. "While not really known, Philly really is an indie-dev powerhouse."

The Game Forge's power stemmed from more than its Dev Nights. It was a place for meeting people, asking questions, teaching others and taking chances. Multiple members describe Game Forge as a creative paradise in what had previously felt like the game-development desert of Philadelphia. They recount stories about feeling alone and lost in the city as a burgeoning developer -- until they discovered the Forge. Its community pulled some members from the clutches of depression, it propelled some into careers as developers and it served as a second home for even more.

Crucially, the Forge demonstrated that independent development was possible in Philly.

"Everyone was so friendly and always willing to help, which was the opposite of what I expected game dev to be like. ...As for the party? I've never cried more in my life. It's not the tears of graduation, or of a goodbye party. They're the tears of losing a friend." - Mila Pokorny, Deerfox Games

"The most substantial thing I did in the Forge was Global Game Jam 2015. I spent that weekend rising early and going to bed late, spending all the time in between at the Forge, working nonstop alongside other artists and programmers to slap together a game. It was one of the best weekends ever." - Tabitha Arnold, artist

"It helped get me out of my shell, and encouraged me to constantly improve my work and constantly contribute back to a community. ...The Game Forge is the reason why game devs in Philadelphia have a community at all." - Nick Rome, Dev Night host

"The Philly Game Forge was, more than anything, a beacon of hope that making games was a real thing you could do." - Jake Vander Ende, Spriteborne

"After the Forge was established, the game development community just seemed to evolve. Games reached new levels of production and the community reached levels that it would take much longer to reach individually." - Shawn Pierre, Origaminc, Philly Dev Night co-founder

"The Philly Game Forge, and by extension Dev Night, is how I got into game development at all. Will and Dain and the rest of the Forge regulars pointed me in the right direction and gave me the confidence and the drive to start Ghost Crab Games." - Chris Hoopes, Ghost Crab Games

"Without it I wouldn't have my job, many of my friends, and most of the games I've made. ...Philadelphia has no major game studio and only a few successful smaller studios; the Forge served as place that tied the small community together into something much more dedicated than you might find in other cities." - Camden Segal, independent developer

"It was a creatively fruitful place with some of this city's best minds. It was a place I went to for a safe haven to work on the things I care about the most. ...I was heartbroken to hear the Game Forge was closing." - Nicole Kline, Cardboard Fortress

The Philly Game Forge didn't close down due to lack of interest or love. It was a simple money issue -- Stallwood and Saint funded much of its operations themselves via their studio, Cipher Prime. Other studios at the Forge, including Flyclops and Final Form Games, helped out too, but in the end, it wasn't enough to keep the lights on.

"We're a small studio and have been having some financial and health issues," Stallwood said. "Ultimately, we realized we could run our game studio or run the Game Forge. We had to make a very hard choice, but we ultimately chose to keep running Cipher Prime the best we can."

Stallwood said the remaining studios were hesitant to take on the financial burden of running the Forge, and a little help from local universities or the government could have gone a long way.

"I don't think it struck me until we were closing what it was we had actually accomplished," Saint said. "It's very easy to get caught up in the day-to-day organization, planning and logistics. So when you come up for air and see hundreds of people really feeling the loss of something you've had a part in creating, you have to look back and appreciate it."

After four years of friendships, support, game launches and failures, the goodbye party was heartbreaking yet joyful for most attendees. It was the very definition of bittersweet. The end of the Game Forge doesn't signal the end of independent development in Philadelphia. It helped cultivate a rich community of video-game enthusiasts and professionals, and they're not going anywhere. Philly Dev Night is still alive and well; it just needs to find a new home. On July 7th, the first Thursday without the Game Forge, developers met up for happy hour at the Independence Beer Garden. They jokingly called it the "first Dev Night in exile."

That's the same sense of humor, the same self-deprecating, warm tone that was found in the Forge's finished-game chant. The Philly Game Forge lives on.

In this article: art, av, business, CipherPrime, culture, gaming, Indie, philadelphia, phillydevnight, phillygameforge
All products recommended by Engadget are selected by our editorial team, independent of our parent company. Some of our stories include affiliate links. If you buy something through one of these links, we may earn an affiliate commission.