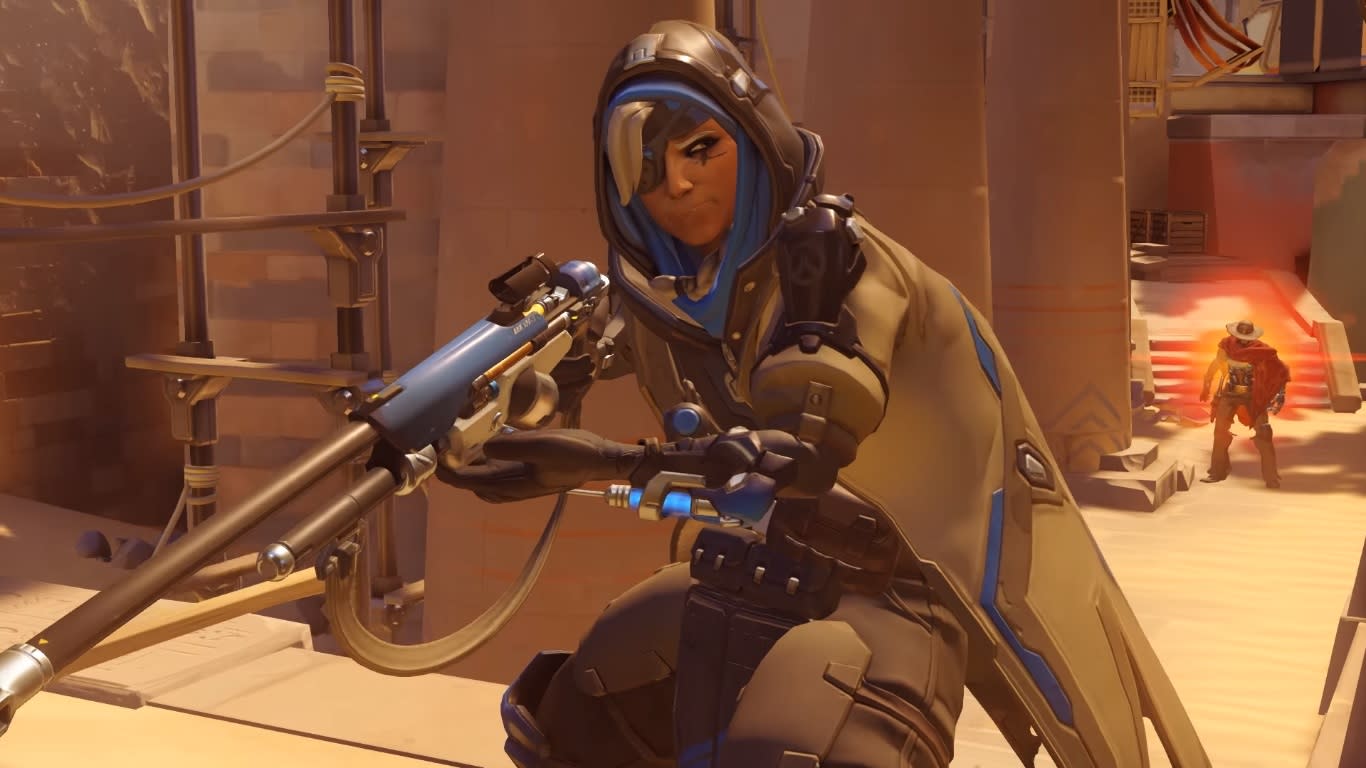 In the month since its release, hero shooter Overwatch has received substantial praise and increasing speculation about new characters to come. Lauded game studio Blizzard has been characteristically silent about any additions to the game, going so far to placate clamoring fans with a panel at San Diego Comic-Con to discuss their next hero. But out of nowhere, the wait is over: the studio has announced Ana, a support sniper and mother of existing character Pharah. While she isn't released publicly yet, she is playable on Blizzard's PC-only public test realm (PTR) servers.

Ana's kit is pretty unique: a ranged support character that can both heal and do damage over time with her weapon. Both of her abilities follow the role, with an area of effect grenade that both heals allies and prevents enemies from getting healed, while her sleep dart temporarily incapacitates enemies for a time period or until they take damage. Her ultimate, Nano Boost, is an all-around buff that increases damage and movement speed while reducing damage taken. In short, a distance healer-fighter hybrid that can help while staying out of harm's way.

According to the video below, Ana was one of the old guard of the Overwatch organization. An efficient professional, she completed her missions until apparently hesitating to shoot Widowmaker, an old friend turned into an assassin by a shadowy terrorist cabal. Believed dead, she lost an eye and her team of friends, but is apparently back in the fight.

Overwatch rose from the ashes of Blizzard's canceled MMO Titan, and to keep the game's focus on light multiplayer, all backstory is hidden in artifacts around the levels. Thus, gamers churned the rumor mill with theories about soon-to-come heroes, correctly deducing that a sniper character would soon be released and even rightly guessing her identity and story connections to the Overwatch organization. After a hint-packed tweet was sent last week by the official Overwatch account, buzz grew around when, not if, Blizzard would officially announce her.

The studio's silence about elements in development goes hand in hand with their motto of "it's done when it's done." This reflects its famously high level of polish, but also the painful process learning how much fans soured on news of game delays. Now the company only makes announcements when they are certain that characters or modes will end up in the game, though by that time they are so unusually refined that they are almost ready for live play.

It seems Blizzard's rigorous testing process still has a ways to go with Ana, as they have only stated she is "coming soon" to Overwatch. PC players can try her out on PTR servers, which the studio uses to test new additions before they release a patch to update the game globally. The latest of these was released today, limiting teams to one of each hero in the relatively new Competitive Mode so you won't have to worry about slamming into six Torbjörns.

In this article: Blizzard, gaming, overwatch, personal computing, personalcomputing
All products recommended by Engadget are selected by our editorial team, independent of our parent company. Some of our stories include affiliate links. If you buy something through one of these links, we may earn an affiliate commission.