It's a forgettable phone, but it comes with a decent VR headset.

Alcatel isn't a tier-one company. And the Idol 4S, its latest creation, isn't a tier-one phone. So why did we even bother reviewing it, then? It's all about the value -- specifically, what comes in the box. For $399 (or $350, if you pre-order), you get both the mid-range phone and a simple virtual reality headset to go with it. It's true, this VR viewer isn't at the same level as the Oculus Rift, HTC Vive or even the Samsung Gear VR, but it's good enough for people who haven't yet experienced this whole virtual reality thing and are keen to give it a try.

As for the phone itself, we enjoyed its loud, two-way speakers and bright 5.5-inch AMOLED display. Just know that because this is a mid-range phone, after all, the performance and camera won't match any of the high-end devices we typically review. If you weren't going to spend high-end money anyway, and are also looking to get into VR, this could be the ticket. 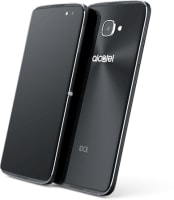