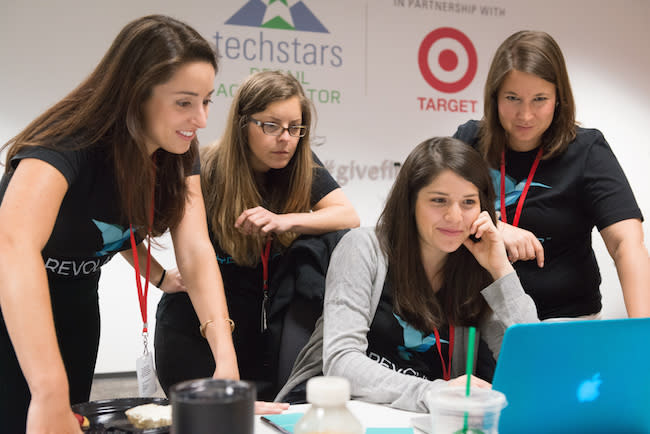 Ten startup teams are holed up in Minneapolis through next month to use a new retail-focused accelerator there to launch everything from voice-based search technology for retailers to interactive games that help kids learn STEM concepts. Their workspace is a typical startup bullpen -- an open zone filled with things like boxes of food, Apple products, whiteboards with rows of Post-its and signs hanging from the ceiling that mark each startup's turf.

Their host is none other than Target, which built an 8,000-square-foot space at its headquarters in the city for the inaugural accelerator it launched earlier this summer. Never mind that Target employs some 341,000 people and does more than $73 billion in sales a year -- it also wants to try and bottle some innovation from scrappy startup entrepreneurs as it attempts to chart a path forward.

That's as good a starting point as any in understanding a high-stakes shift in priorities underway at big legacy retailers like Target and Walmart. Indeed, they're increasingly caught up in a Silicon Valley-style scramble for top talent like coders and engineers. They're also launching and staffing up skunkworks labs and working with startups -- all in an effort to slingshot themselves into the future.

Some of the ideas Target is pursuing include the accelerator it founded in partnership with Techstars, as well as its "Food + Future coLab" focused on food innovation.That effort was launched in collaboration with the MIT Media Lab and Ideo. The idea behind the lab is to bring together teams from each of those founding organizations to come up with big ideas related to food.

Target in recent weeks began testing a concept at one of its Boston stores that came out of the lab. Essentially, it allows people to scan fruits and vegetables to identify their nutritional value -- and to pay for the item based on its freshness.

Walmart, in its own way, is racing toward the same goal. Earlier this month, the retail giant said it would pay about $3 billion to buy e-commerce startup (and Amazon competitor) Jet.com. In recent weeks, the company also rolled out its Walmart Pay payment system to all of its US stores.

And while it's not readily apparent from visiting any of its nearly 5,300 US locations, Walmart also has a San Francisco Bay Area outpost called WalmartLabs -- a kind of skunkworks unit focused on the retailer's digital products and services like Walmart Pay.

"We've got several new things in the works I can't announce," Walmart Chief Technology Officer Jeremy King told Engadget. "But let's just say you'll see us make it even more compelling to use your phone in the store."

What it all amounts to is two of the biggest, most traditional retailers in the US looking West for inspiration. And their experimentation is certainly worth watching. It might fall flat, but there's also a chance they could successfully infuse enough Silicon Valley-style innovation into their playbooks to reinvent themselves -- and the retail experience -- in the process.

In a way, they don't have much choice. While the retail industry is eking out barely 1 percent growth, e-commerce is zipping along at 15 percent, according to the latest Deloitte Retail Volatility Index, published by the consulting firm Deloitte.

Target, which said earlier this year that it plans to spend more than $2 billion starting in 2017 on tech and supply-chain improvements, has been busy on several fronts to try and capture some fresh digital mojo.

The company is hiring staffers for a tech project codenamed "Goldfish" that will be housed out of Target's Sunnyvale, California, office, which opened in 2014 to focus on things like online and mobile data analytics. A job posting for engineers is short on details but says, "We're a brand new team, intent on changing the way people shop." West Stringfellow, whom Target hired last year as its first entrepreneur-in-residence after stints at Amazon and PayPal, is behind the mystery project, though he's staying put in Minneapolis.

Among the teams participating in Target's accelerator is L.A.-based MakersKit, which provides DIY craft kits and instructional videos for all ages. Others include MakerBloks, a Montreal-based startup that creates interactive games and craft materials to help children learn about electronics, technology and STEM ideas; and ItsByU, a startup that provides kits for users to create their own wedding-flower arrangements. The teams are going through 14 weeks of programming and mentorship from executives like Target's chairman and CEO himself, Brian Cornell. According to the company, 50 percent of the startup teams have female cofounders, and two are international -- one from Canada and one from Hong Kong. There are also a couple of family-run outfits, with a husband-and-wife team as well as a team of sisters.

"We're looking first and foremost to help these startups," said Stringfellow, who is now Target's vice president of internal innovation and operations. "If there's a symbiotic opportunity, great. If not, that's OK, too. We'll be learning from their discipline, focus, excitement and passion, and a second-order effect will be us taking some of that and applying it to our products and teams and practices."

The approach to digital and innovation efforts at WalmartLabs is a little different.

The company's division focusing on new technologies and digital products is keeping its roadmap mostly hidden. But it generally focuses on innovation that can be built into features across Walmart's operation.

WalmartLabs' Bay Area presence is split between Sunnyvale and San Bruno, where it shares a parking lot with Twitter. King says being there lets the division compete with big tech companies for engineering and coding talent. And according to King, at least, it wins that hiring race more often than not.

At the inaugural TAP Conference last year, WalmartLabs director of innovation Ojonimi Bako spelled out its basic M.O. -- the unit has a degree of freedom to experiment, separate from the rest of the company. The best of these ideas could eventually be scaled across the company. The lab is also free to pursue its own acquisitions of other companies, of which there have been 15, King says.

Together, Walmart and Target's respective approaches show how legacy retailers can compete in the digital age. And they're not alone. Over in Europe, retailer John Lewis -- which operates 46 shops across the UK as well as a web presence -- has an accelerator program of its own, called the JLAB.

The five retail tech startups John Lewis selected for the latest round of the program are built around everything from programmable robots to advanced computer-visioning. They get access to mentors and capital. John Lewis, in turn, gets to learn from them in a way that could potentially help the 152-year-old retailer stay relevant in the 21st century.

There are plenty of other examples. Consumer-goods giant Unilever has a corporate accelerator called the Unilever Foundry. Disney and BMW also host their own startup incubators.

Efforts like these from the retailers might end up successfully connecting them with smaller, faster-moving companies. And those companies might have different skill sets and insights the bigger brands can tap to improve their own operations. Walmart CTO King, for his part, says traditional retailers too often are content to just build what he calls "toy shops," where "10 to 20 people form a group to maybe build an app or play with beacons."

Indeed, after a few years of operation, upscale department store Nordstrom recently dismantled the tech-focused "innovation lab" it had set up six years before. Nordstrom spokesman Dan Evans told Engadget innovation is now required across the whole company, not just for one unit.

"We no longer have a specific innovation lab, as we folded the responsibility of innovation across our technology teams so that each group has a stake in how we innovate for the customer," he said.

It's an admission of how tough it is to get the balance right: to maintain the core of what you as a retailer do, while at the same time trying to figure out why the world is changing around you, and what you can do about it.

Kasey Lobaugh, chief retail innovation officer for Deloitte Consulting, says he's seeing a growing number of retailers deciding to pursue one or both of these paths, launching so-called innovation labs, many of them in Silicon Valley, and setting up incubators or accelerators.

Those innovation labs, though, have "been of marginal success so far," Lobaugh says. "Largely what those centers have done is focus on technologies to apply to the current business. Like, not changing the business model, just doing something like adding beacons so we can communicate with an app and maybe send the customer interesting marketing material while they're shopping.

"The second thing retailers have started to do," he continued, "is say, 'Maybe we need to be more like a startup, maybe figure out ways to be around startups.' And so they launch an incubator to figure out what they're doing and maybe learn from them. I'd say the jury is still out on how successful that will be."

To Walmart's King's point about "toy shops," Lobaugh notes how Uber did a lot more "than just develop a mobile app and tack it onto a taxicab company." And therein is the cautionary note for retailers who think innovation centers are some sort of magic bullet.

Meanwhile, at Target, Walmart and many of their competitors, that's exactly the work that's happening now. Expect it to continue. The retailers are more open now to looking for new ideas in unexpected places. Even if that place is a small, tech-savvy startup that couldn't be more removed from the world of big-box retail.

In this article: business, colab, culture, itsbyu, makerbloks, makerskit, MitMediaLab, target, Techstars, TL17WLMRT, walmart, Walmartlabs
All products recommended by Engadget are selected by our editorial team, independent of our parent company. Some of our stories include affiliate links. If you buy something through one of these links, we may earn an affiliate commission.