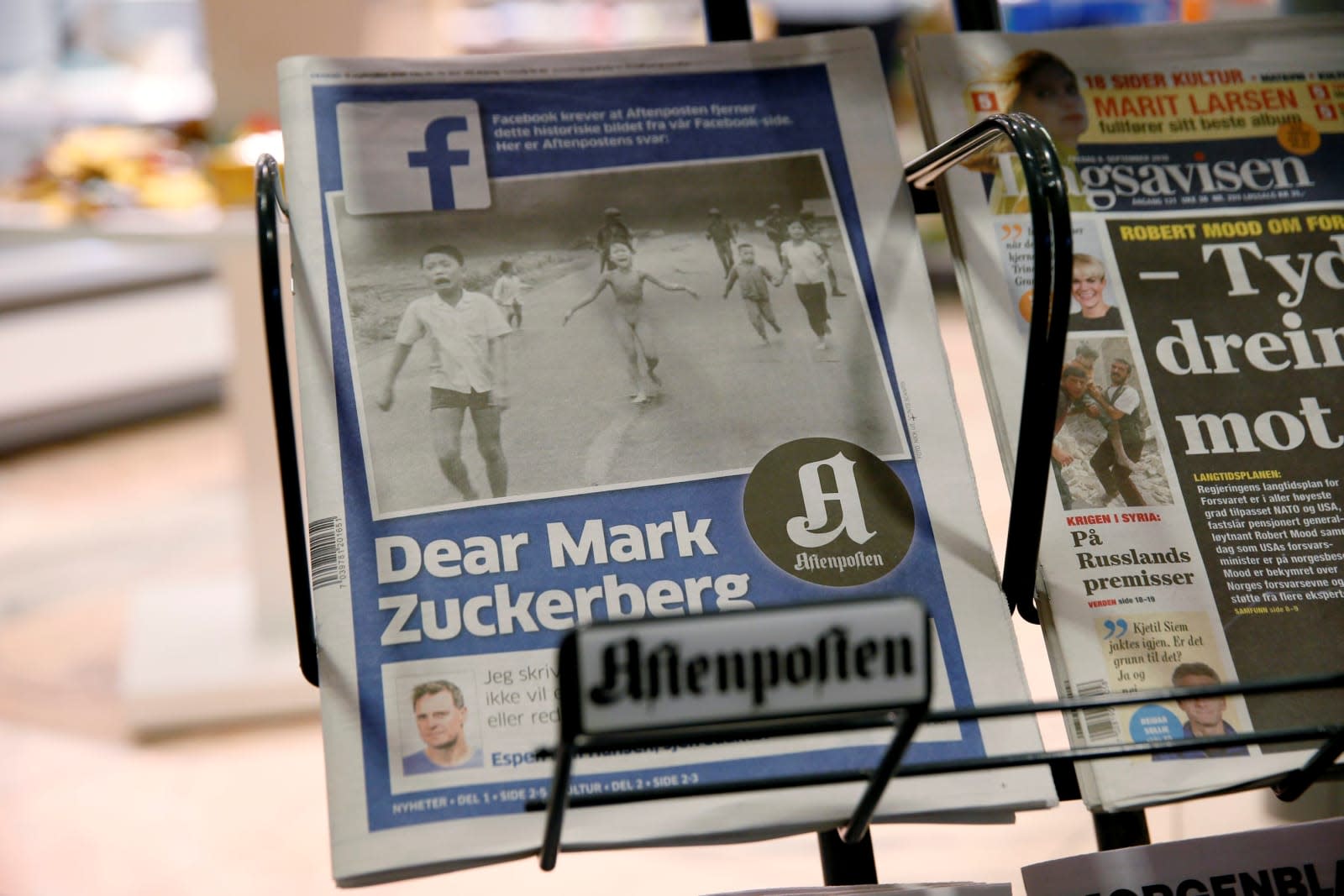 Facebook's policy on what constitutes as nudity is in the news again. This time, though, there's a reversal involving a Pulitzer Prize-winning photo from the Vietnam war, The Guardian reports. The Terror of War is a photograph of children running from a napalm attack with armed soldiers behind them, taken by Associated Press photographer Nick Ut. One of the kids, Kim Phúc, is naked. When Norwegian writer Tom Egeland posted it along with six others as a status concerning photos that "changed the history of warfare," the author's account was suspended.

More than that, when the editor in chief of Norway's largest newspaper, Aftenposten, published an open letter to Mark Zuckerberg about the removal, the article used the same image as its lead photo. Facebook reached out and asked the publication to either remove or pixelate the photo. And then Facebook took action and deleted the post from the newspaper's profile page before EiC Espen Egil Hansen could respond, stripping the publication of its own editorial judgment.

"Even though I am editor-in-chief of Norway's largest newspaper, I have to realize that you are restricting my room for exercising my editorial responsibility," he writes. "I think you are abusing your power, and I find it hard to believe that you have thought it through thoroughly.

"The media have a responsibility to consider publication in every single case. This right and duty, which all editors in the world have, should not be undermined by algorithms encoded in your office in California. Editors cannot live with you, Mark [Zuckerberg], as a master editor."

As The BBC writes, Norway's prime minister posted the photo as well, only to have it removed in similar fashion.

Facebook has responded, both by reinstating the photo and offering reasoning for why the deletion occurred in the first place.

"While we recognize that this photo is iconic, it's difficult to create a distinction between allowing a photograph of a nude child in one instance and not others," the social network tells The Guardian. "We try to find the right balance between enabling people to express themselves while maintaining a safe and respectful experience for our global community. Our solutions won't always be perfect, but we will continue to try to improve our policies and the ways in which we apply them."

Facebook has repeatedly said that it's a tech company, not a media organization. But this, combined with its checkered past concerning how it portrays news on the site, is evidence that Zuckerberg and Co. don't quite realize how others view the site's role in modern life.

In this article: afenposten, associatedpress, censorship, culture, EspenEgilHansen, facebook, internet, KimPhúc, MarkZuckerberg, nickut, norway, photography, theterrorofwar, TomEgeland
All products recommended by Engadget are selected by our editorial team, independent of our parent company. Some of our stories include affiliate links. If you buy something through one of these links, we may earn an affiliate commission.