R. Baldwin
@strngwys
September 17th, 2016
In this article: 801.11ac, app, EA9500, engadgetIRL, gadgetry, gadgets, gear, home, Linksys, MUMINO, Networking, review, router, TriBand, uk-reviews, wifi, WiFiRouter
I live in a two-bedroom San Francisco apartment built in 1916. It has a view of the bay and the top of the Golden Gate bridge. There's crown molding, high ceilings and some pretty dope neighbors. It should be perfect. And it is -- if you're cool with plaster walls blocking 90 percent of all WiFi signals.
Linksys 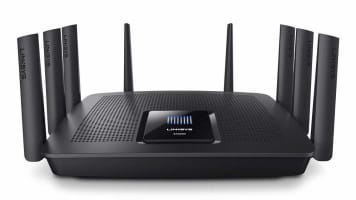 My livelihood is gadgets, most of which need to be online. But if anything is farther than 12 feet from the closet where I store my router, I know I'll experience dropouts or painfully slow speeds. I've resorted to using two routers placed in separate corners of the apartment. It's ridiculous. So when Linksys offered up the EA9500 Max-Stream MU-MIMO router for review, I wanted to see if it could permeate what I assume are the lead-filled walls of my home.

Like most modern WiFi routers, the EA9500 resembles a spider that's been flipped onto its back. The eight adjustable antennas can be positioned to optimize your signal. But during setup I followed Linksys' recommendation to leave the blades pointed straight up. I would have to decide later if I needed a little extra WiFi pointed in a particular direction. If you've set up a router in the past 15 years, you know the drill: Plug the router in, find the wireless network, launch your browser, plug in the IP number. Fortunately, in the past few years, Linksys has killed the default password in favor of a unique alphanumeric passcode generated during setup. That's good news for folks who might not be aware that "admin" and "administrator" might not be the best username-and-password combo. (We realize that might not be you, dear Engadget readers, but perhaps your less-tech-savvy relatives?) After using the browser-based setup wizard, I logged onto the router with my MacBook Air from the living room. Success! WiFi was flowing freely throughout my Faraday Cage of a home. Even the farthest room from the network closet was awash in free-floating zeros and ones. I was even able to log onto the network from my garage three floors down.

To accomplish this, the router goes a little overboard for the typical home and you pay a steep price ($350) for all that future-proofing. The tri-band router can spew 1,000 Mbps on the 2.4GHz band and 2166.67 Mbps on one of its two 5GHz radios. That sounds awesome until you realize most of your devices can handle only about 1,300 Mbps. It's like buying a Ferrari to drive only 25 miles per hour.

It also supports MU-MIMO -- a wireless feature that creates dedicated data streams between the router and supported devices. The end result is quicker throughput. Right now it's found on most high-end smartphones and Windows-based computers. Where you won't find it are Macs. While the iPhones 6S and 7 support the wireless standard, Apple has yet to add it to its laptops or desktops. I use Macs, so I'm missing out on the router's coolest feature right now. Linksys sells USB dongles that add MU-MIMO, but they work only with Windows machines.

If you own a Windows computer, then, it should be amazing. Apple users are stuck using WiFI the old- fashioned way. While Apple is expected to announce new MacBooks before the end of the year, there's no guarantee they'll support MU-MIMO. That alone might give you pause before purchasing the powerful EA9500 if that's your platform of choice.

That said, the router and its companion app have made network troubleshooting in my house a breeze. Anything I can do from the browser I can do from the app, including setting up guest access, port forwarding, device prioritization, password changes, firmware updates and most important, restarting the router. All these features can be accessed in the home and out, which is especially helpful when you get a frantic call during the workday that the WiFi is down at home.

Finally, the EA9500 has eight gigabit ports, which are essential if you're trying to fill your house with the Internet of Things and need somewhere to plug in all those hubs. But like everything else on the router, it's probably overkill for the average user. After a month of use, I can't imagine going back to another router, even with the lack of MU-MIMO support on my computers. But I'm an extreme-use case. I need all those gigabit ports, my home is a giant lead cage and, frankly, being a tech reporter gives me more reason to be ahead of the curve. For the average home, the features on the EA9500 are mostly unnecessary.

If you're in the market for a router and want access to the helpful Linksys app, the less expensive $250 EA8500 is a more than adequate 802.11 router with MU-MIMO. If you don't need MU-MIMO because you live in an Apple house, the E8400 is a dual-band router that'll cost you $230.

As for me and my home, I'll continue to enjoy wireless access to the internet in my entire apartment for the first time since I moved in.