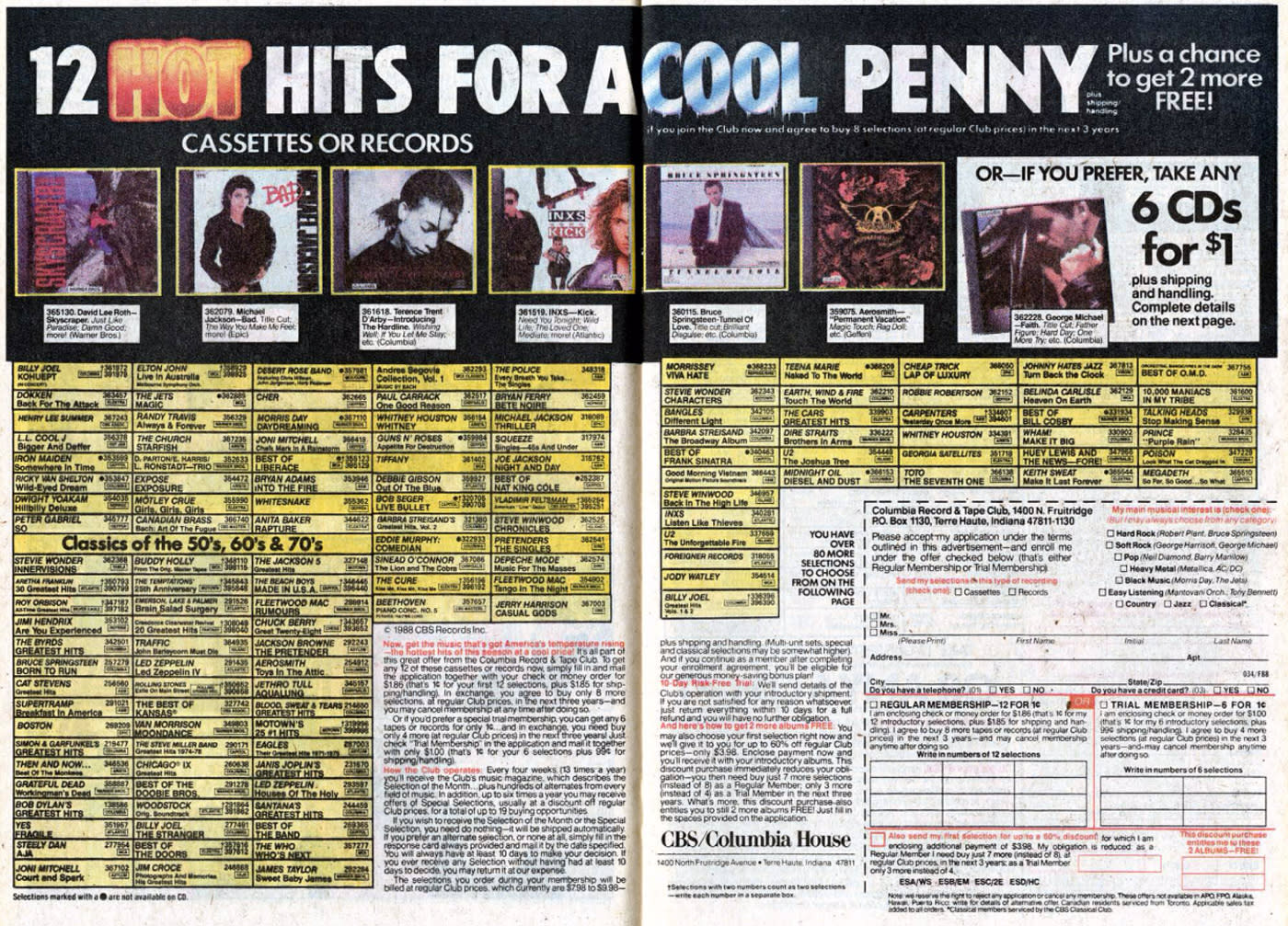 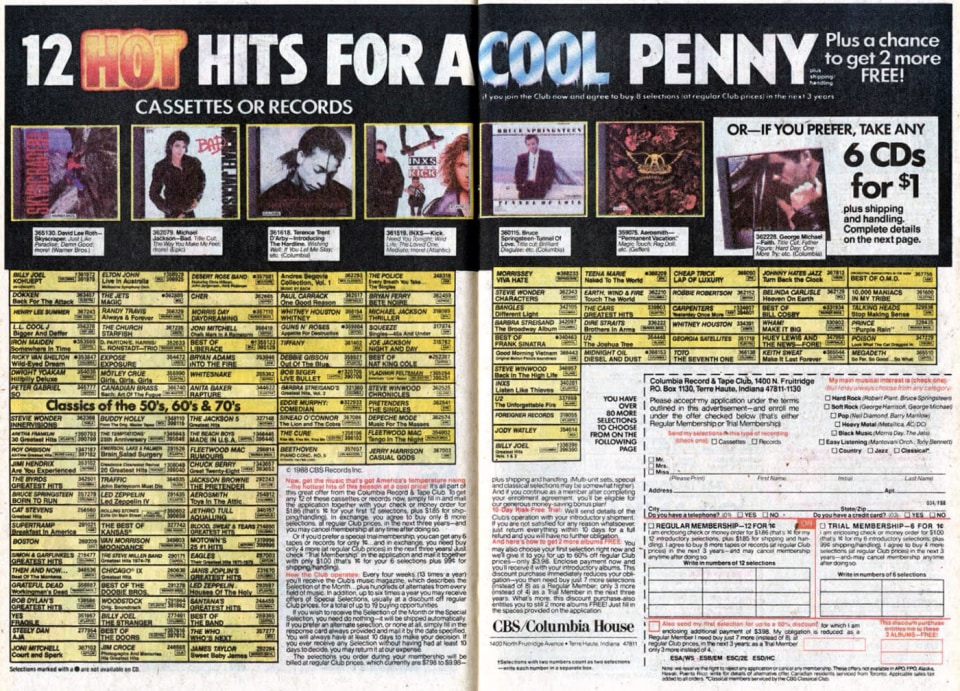 When I was 13, my babysitter showed up with a box of 12 new cassettes. I was amazed that she had been able to afford all this music. I grew up poor and even one new purchase was news; a dozen purchases was cause for celebration. Had she robbed a bank? Found a wad of twenties in a misplaced wallet? Been blessed by the benevolent lottery gods? Seeing the wonder in my eyes she grabbed the TV Guide sitting on the coffee table and opened it up to an advertisement for Columbia House, and there it was in bold letters: "12 tapes for a penny." Thus began my life of crime.

Since the all-you-can-fit-on-your-hard-drive Napster era, it's been generally accepted that people no longer want to pay for content. Why buy a CD or digital download when you can open a Spotify account or fire up a BitTorrent client and enjoy the same music for free? This has led to hand-wringing about how millennials (ugh, that word) have been raised to expect free stuff. They're destroying the music industry and killing movie sales. If you spend more than 30 minutes on the internet, expect to see an article about how they are the absolute worst.

Except the expectation of getting things for free didn't start with the Pokémon generation. It started in the 1980s when kids who embraced the ThunderCats, Depeche Mode and eventually Kurt Cobain opened TV Guide and started scamming the fine people at Columbia House. Like so many people on Napster (also fueled by GenX), I didn't feel like I was doing anything wrong when I basically stole from the company. I liked music, and those nice people were going to send it to me if I taped a penny to a postcard. I only remember a few titles from that first order: Bon Jovi's Slippery When Wet (ugh), Starship's Knee Deep in the Hoopla (double ugh), Fleetwood Mac's Tango in the Night and Beastie Boy's Licensed to Ill. The rest are hazy.

Columbia House expected its subscribers to purchase three, maybe four more albums at the regular price. Every four weeks a mailer would arrive with an album of the month. If you didn't return the included postcard saying you didn't want that album or order a different tape, that selection would arrive along with a bill.

That would happen for about three months before Columbia House would get wise and just send a bill. I was a latchkey kid so I would get home from school and toss the mailers in the trash so my parents didn't learn about how I was conning The Man. The company never asked for a phone number (not that it would matter -- our phone was shut off most of the time) and didn't seem to realize on the second or even third time that I was just changing my last name on the account.

The company kept sending tapes, and I continued to ignore its pleas for payment. I couldn't afford a Walkman, but I was building a pretty substantial music collection. It all came to a halt when my dad found one of the bills and made me pay off my debt. I gave him my birthday money, and he wrote a check and cancelled my account. My argument that everyone I knew was doing it fell on deaf ears as my father lectured me on debt, credit and stealing. I don't remember the specifics. I just recall handing him my stash to settle the score with Columbia House.

Years later when I had a job and was making my own money, my music obsession cost me hundreds of miles on my car and at least $150 a month. I'd travel hours to pick up the Japanese import B-side to a Smiths song. I spent $50 on a Pearl Jam bootleg of one of their first shows in Italy. As far as I was concerned my debt to the music industry was paid in full. GenX and millennials flocked to the service that let you steal music with a few clicks. I had hard drives filled with songs from bands I wanted to check out but couldn't bring myself to buy. If you're over the age of 25 and under 50 and say you didn't use Napster to pilfer music, you're lying.

But karma got the best of me when my computer had a meltdown and all those songs were lost forever. Napster was dead and many people in my generation resigned themselves to paying for music again. And yet, we've skirted the blame for what's become of the music industry. The slackers of the '80s and '90s mostly just want to be left alone, and because of that silence, we've allowed millennials to bear the burden of our music-stealing sins.

We were the original thieves of the music we love. But unlike digital files, we took it and held it in our hands. Using flashlights we stared at lyric sheets and album art under the covers in the dead of night. As adults, we giggled a little when Columbia House went bankrupt because we felt like we did that. But we have wronged you, Columbia House. And millennials, we have stood by and let you take the blame for the state of the music business. And for that, I'm sorry.

In this article: business, ColumbiaHouse, culture, editorial, entertainment, GenerationX, millennialls, napster, opinion, services
All products recommended by Engadget are selected by our editorial team, independent of our parent company. Some of our stories include affiliate links. If you buy something through one of these links, we may earn an affiliate commission.