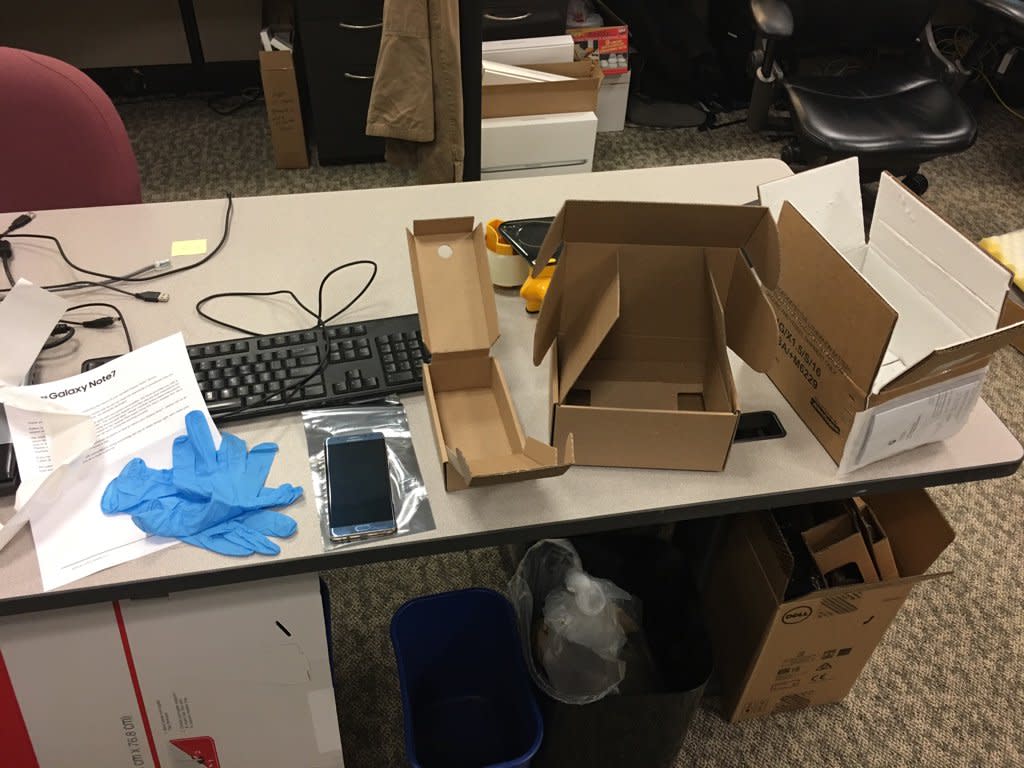 If you purchased a Galaxy Note 7 from a US carrier or retailer, you can (and should) return it to a store immediately. If you bought the phone straight from Samsung, though, the process was a little trickier -- some customers complained early on about FedEx and UPS refusing to handle return units out of fears they would blow up. That's why Samsung has adopted an elaborate recall box that allows affected phones to be returned to the company via UPS Ground. It's... sort of a doozy.

The folks at XDA have received that new return packaging, and very quickly you get a sense of how big a headache this must be for Samsung. After powering off the affected phone, you'll have to stick it in an anti-static bag, which goes in a cardboard box, which goes in another cardboard box, which goes in one last thermally insulated box lined with ceramic fiber meant to help to keep potential fires under control. Oh, and since there's a chance that ceramic fiber could irritate skin, there's a pair of blue latex gloves in there for good measure. According to Twitter, Samsung started using these more durable boxes in late September, just in time to accommodate people freaking out over multiple reports of burning replacement phones. (We've reached out to UPS and FedEx for comment on all of this, and we'll update this story this if they have anything interesting to add.)

And another thing: how much must these things cost? Samsung and CPSC have worked to try and recall around 1 million Note 7s in the US, and whipping together specialized packaging for even a fraction of those devices must've set Samsung back quite a bit. Financially, things are starting to get pretty hairy -- early analyst guesses pegged the cost of the company's recall at about $1 billion, and it's estimated that by completely stopping Note 7 sales, Samsung may have lost out on nearly $17 billion in revenue. Then again, the chaebol makes most of its money from other avenues, so don't expect Samsung to up and disappear any time soon.

In this article: android, galaxynote, galaxynote7, gear, mobile, note7, recall, safety, samsung, smartphone, TL16NOT7, ups
All products recommended by Engadget are selected by our editorial team, independent of our parent company. Some of our stories include affiliate links. If you buy something through one of these links, we may earn an affiliate commission.