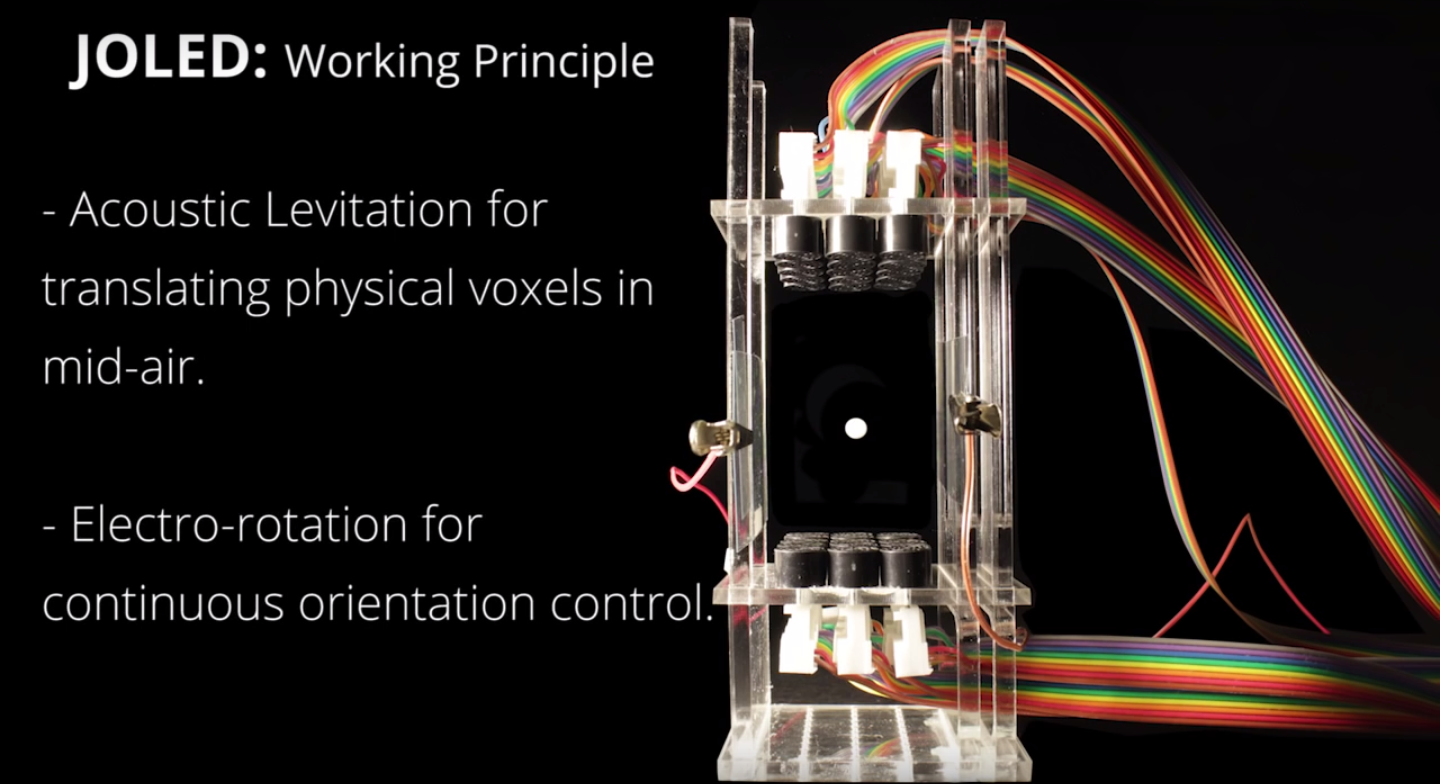 The amount of pixels in a display has been the source of forum flamewars since the advent of HDTV, which makes an experimental display technology from the University of Sussex so interesting. It's called JOLED and it measures a whopping 7 x 6 voxels high and wide, respectively. Hold on, it gets more interesting. Each voxel is a diminutive multi-colored sphere, and they're suspended in mid-air by an array of ultrasound speakers that "create high-pitched and high-intensity soundwaves that are inaudible but forceful enough to hold the spheres in place," according to the school.

That holds the JANUS objects in place, but to make them spin and show different colors at different times is something else entirely. What seems to be the key to the rotation is that the spheres are coated with titanium dioxide -- also used to purify air when mixed with concrete -- which, when a exposed to an electrical field causes them to rotate.

"JOLED could be like having a floating e-ink display that can also change its shape," researcher Deepak Sahoo said in a canned press release quote.

Maybe don't expect to have these sitting on your desk, though. The school suggest that it could wind up like many of Disney Research's projects and be used in commercial or tourism settings. Some examples? Showing the changing patterns of carbon footprints or changes in currency conversion rates. So, don't expect to watch Luke Cage on one of these in HDR anytime soon is what I'm saying.

"We also want to examine ways in which such a display could be used to deliver media on-demand," University of Sussex's Sriram Subramanian said. "A screen appears in front of the user to show the media and then the objects forming the display fall to the ground when the video finishes playing."

The scientists hope to increase the pixel density as well as the amount of colors displayed (sound familiar?), and will be presenting their research next week at Japan's ACM User Interface Software and Technology Symposium.

In this article: av, display, displaytechnology, janusobject, joled, science, SriramSubramanian, universityofsussex, voxel
All products recommended by Engadget are selected by our editorial team, independent of our parent company. Some of our stories include affiliate links. If you buy something through one of these links, we may earn an affiliate commission.