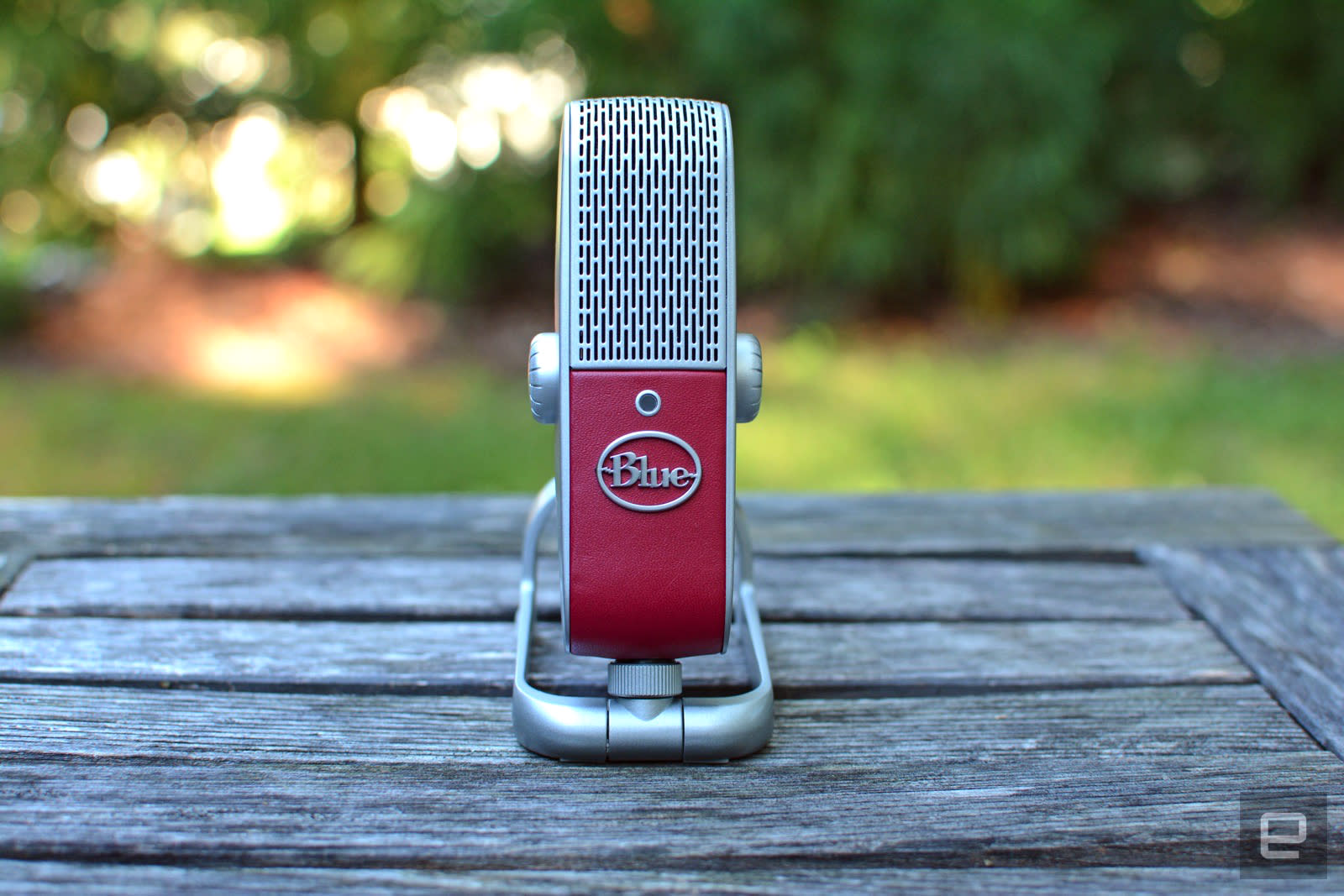 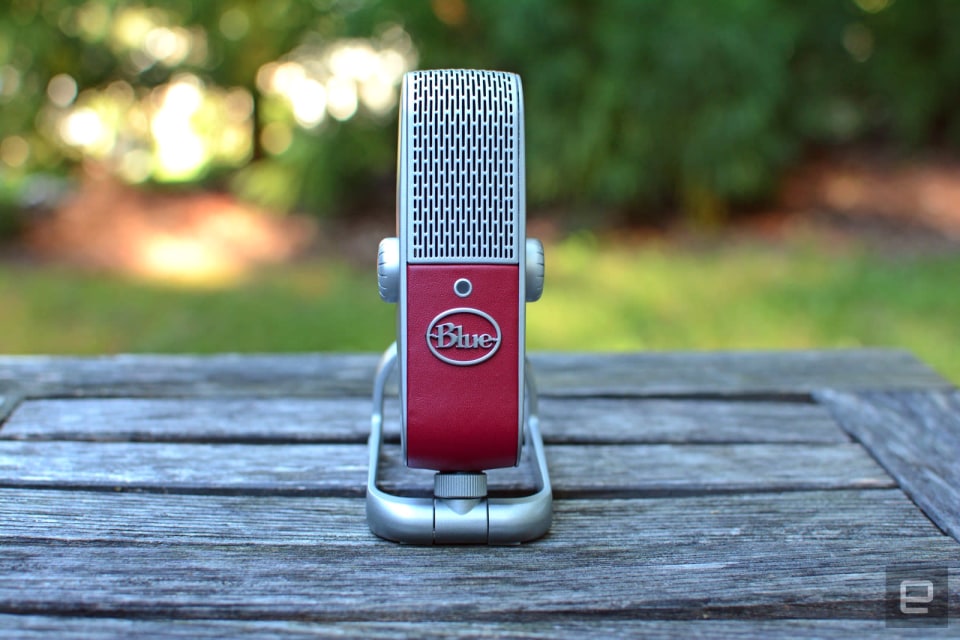 It's no secret that Blue's line of USB microphones are a go-to choice for podcasters and anyone else who wants a simple, easy-to-use recording device. The company's Snowball and Yeti mics may be the most popular, but its last few products have focused more on technology that helps you streamline the postproduction editing process. The same can be said for its latest device, the Blue Raspberry. The Raspberry's compact stature and built-in audio tools make it ideal for on-the-go recording, even with the $200 asking price. With the Raspberry, Blue threw in its usual retro design touches without overdoing it. The company has a knack for blending old and new aesthetics in a way that's unique but not kitschy. The exterior here is mostly silver with a matching metal stand to anchor it. Tiny rubber feet on the bottom of the stand help insulate the mic from any vibrations on your desktop that could cause problems for your captured audio. The prominent Blue logo sits front and center on a panel of red leather that continues down to the bottom and around back -- no doubt a nod to the gadget's name. This thing is also really small. When it's folded down and nestled in its attached stand, it stands about as tall as both of the phones I have lying around: the Moto X and iPhone 6s.

Above that red patch, the speaker grille extends from halfway down the front panel, around the top and to the middle of the back side. There's also a status light on the front that glows green when you're ready to record and flips to red when you're muted. This red/green combo makes it much more obvious which mode you're in, as opposed to the Yeti, whose light either glows or blinks in red. The change shows you at a glance when the mic is on, so now you don't have to second-guess it.

Over on the right side of the front face lies the mic's gain/level control. With that knob, you can adjust the gain between 0 and 40 decibels. Additionally, that rotating dial serves as the mute switch. Simply push it in to cut the signal if you need to cough or get a drink of water during your session. Push it once more to unmute. Like the mute function on previous Blue microphones, there's also an audible click accompanying the changing light. On the back panel, there's a headphone jack and a micro-USB port. The 3.5mm headphone jack provides zero-latency monitoring while you record, and there's a volume knob on the left side of the device. It perfectly matches the look of the gain control, lending the design a symmetrical feel. As far as the USB socket goes, it's there where you'll connect either the standard USB or lightning cable that comes in the box. There's also a carrying pouch and a microphone-stand adapter should the need arise. Blue says the Raspberry will work with USB-C devices with an adapter. In fact, it has successfully tested the mic with the LG Nexus 5X and Huawei Nexus 6P and the device still performed as intended.

One thing I've always liked about Blue products is their ease of use. The company's line of USB mics require almost no setup, thanks to their plug-and-play design. The same goes for the new Raspberry. To test the mic, I recorded an episode of my beer-focused podcast (it's a side project, OK?). Before firing up a quick YouTube Live session through Hangouts on Air, all I did was plug the microphone into my MacBook Air. Once I got to the Hangouts on Air interface, the only thing I had to do was select the Blue Raspberry as the input and output device instead of my laptop's built-in mic and speakers. I was ready to record in two or three minutes, and that included setting up the YouTube event.

What you hear in the episode above is the unedited audio from the Hangouts recording (I'm the host). This is just the audio pulled from the video YouTube logs, imported to Audacity and exported in a format that SoundCloud accepts for uploads. There was no editing, save for adding the intro clip. Inside the Raspberry, there's a new Internal Acoustic Diffuser (IAD) design inspired by concert halls and recording studios. It's built to diffuse noise and any reflections, thereby minimizing the sound of the room. The company says this allows the device to offer studio-quality 24-bit/48kHz audio wherever you're recording.

When I compared the session I recorded with the Raspberry to clips captured with other USB mics, I noticed a big difference when it came to ambient noise. The captured audio through Hangouts was much cleaner with this new model. It didn't capture sounds from my house like the hum of the air conditioner, washer/dryer and other environmental noises that tend to go unnoticed on a daily basis. I also record in my living room, which has tall vaulted ceilings, so I can plug directly into my router. Other mics also typically pick up on my voice bouncing around the space, but with the Raspberry I didn't notice an echo.

Not everyone needs a microphone for podcasting, though. When it initially unveiled the Raspberry, Blue said the device would work with any audio software. The company specifically lists GarageBand, Opinion Podcasts, Spire Recorder and Movie Pro on the microphone's product page. Since I'm a Mac owner, GarageBand is the most accessible option for me. It's also free. The desktop setup is nearly identical to using the Raspberry for YouTube or Hangouts: Plug in the mic, select it as the input source in the app's preferences menu and you're ready to record. If you're wondering about using the device with an iPhone or iPad, the process is very similar. The only difference is GarageBand for iOS automatically detects when you have an "audio device" connected, so you have to confirm you want to turn on monitoring via headphones to avoid feedback. It's slightly different, but the setup for an iOS handset or tablet is just as efficient.

Blue also says that you can use the Raspberry up close to your face or, if there's more than one person speaking, position it at the center of a table. As with other USB mics, using the gear for a group is a workable option, but the audio quality suffers. I'd really recommend it only for things like conference calls instead of trying to track some high-quality audio. Even with the built-in tech, I still noticed some of that ambient noise coming through. This became more obvious as I placed the mic the farther away. Using the Raspberry alone at a close distance will provide the best results, unless you're OK getting cozy with your colleagues. If you're after a microphone that adapts to what you're tracking, and you don't need to use it with your mobile device, you might want to look at Blue's Nessie. The device will adapt to your vocals and instruments in real time to help you get solid audio without a lot of editing. The best part? Nixing iOS functionality will save you $100. Of course, if you just want a straightforward mic, the Blue Snowball is really affordable at $70. It's been around for years, too -- a testament to how beloved it is.

After my podcasting session with the Raspberry, the latest Blue mic is an attractive alternative to the Yeti I typically use. Built-in IAD technology provided cleaner audio than what I'm used to for my recording environment, living up to Blue's promise of cutting out some of that extra noise. There's also the much smaller form factor; the Raspberry takes up considerably less space than the Spark Digital or Yeti. This means it's convenient if I need to pack it for a trip, but it doesn't skimp on audio quality, either. When you tack on iOS connectivity, Blue seems to have a complete package here in a compact device -- even if it does come with a $200 price tag.

In this article: audio, av, blue, blueraspberry, gear, ios, mic, microphone, raspberry, recording, usb
All products recommended by Engadget are selected by our editorial team, independent of our parent company. Some of our stories include affiliate links. If you buy something through one of these links, we may earn an affiliate commission.