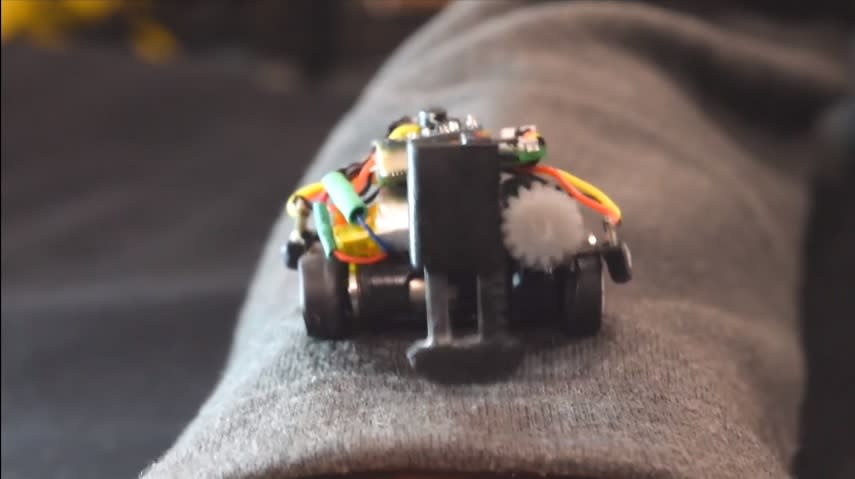 Wearables have gotten smaller and less obtrusive over the years, culminating in today's compact fitness trackers and smartwatches that stay immobile and out of the way. But that doesn't have to be the case. Researchers at MIT and Stanford teamed up to develop Rovables, miniature robots chock full of sensors that roam around the human body while the wearer goes about their lives.

This gives them an edge over traditional static wearables, the research teams says in their paper: Rovables might seamlessly assemble into a wristwatch or nametag, reacting to the host or the environment. The bots are little bigger than a ring box, but they pack a microcontroller, wireless communications and a battery that powers them for 45 minutes of continual use. Their magnetic gripping wheels on either side of clothing let them crawl up, down and around unmodified garments.

By mimicking the locomotion typical of living organisms, Rovables can become truly autonomous, the team argues. Movement lets them perform self-maintenance, like plugging themselves back in to charge, or maneuver to let their sensors get different readings. Finally, it would let the devices tuck themselves away when done, suggesting an eerie but efficient vision of wee bug-like robots storing themselves after performing their function.

The current Rovables are only capable of moving linearly: The team hasn't built a microprocessor powerful enough to handle the complex algorithms required for 3D movement, they told Recode. Aside from the lengthy development needed to turn these petite rovers into the self-assembling swarm of bots imagined by the team, there's no way to predict whether other innovators will latch on to the concept. After all, it's much easier to just cram sensors into a wristband.

In this article: gadgetry, gadgets, gear, mit, Robots, sensors, stanford, wearables
All products recommended by Engadget are selected by our editorial team, independent of our parent company. Some of our stories include affiliate links. If you buy something through one of these links, we may earn an affiliate commission.