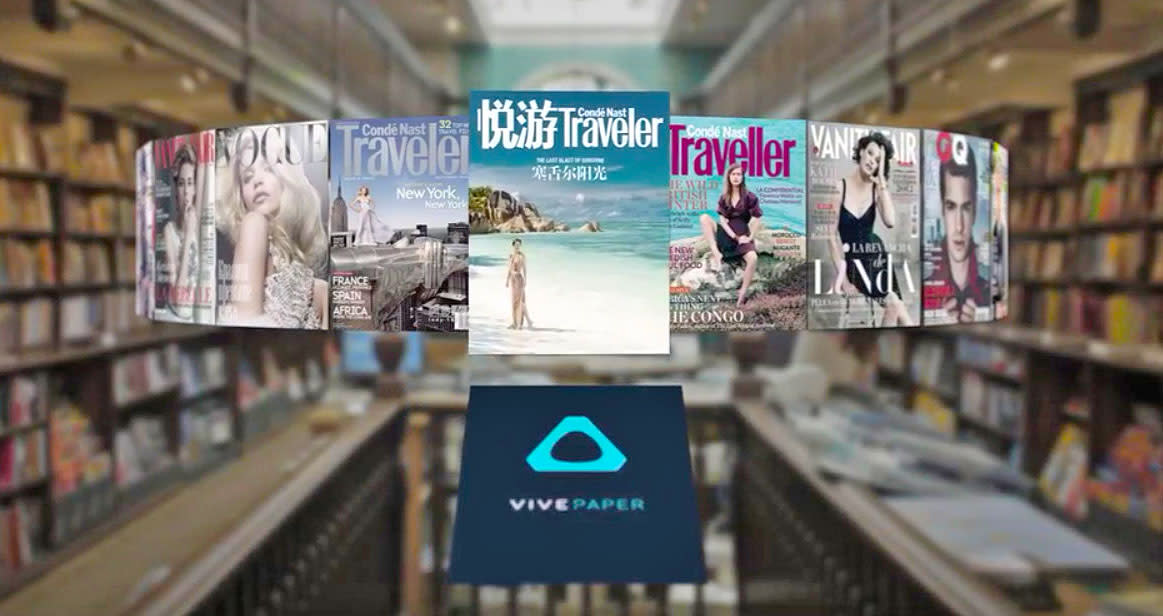 HTC has unveiled Vivepaper, an app that lets Vive users check out interactive, VR content from publishers like Conde Nast. After you don the headset and scan a physical AR booklet, you can peruse a virtual magazine and load up 360-degree videos, 3D content, audio and other content. The passthrough "Chaperone" camera enables augmented virtual reality (A-VR), letting you be in the virtual world and touch physical objects (the booklet) at the same time.

Vivepaper is launching in China with Conde Nast Traveler (China Edition), letting users play tourist with 360 degree video at locations around the world (see the video below). More publishers in the nation will release content soon, HTC says, and it's also "in discussions with several other major western publishers to release Vivepaper version of their content outside China shortly."

Vive says it's the first VR company to use the front camera for A-VR, noting that many readers prefer magazines to device screens because of the tactile experience. "Users are able to 'feel' the content at hand rather than just view it on a screen," the company wrote.

It sees the app as a new way for publishers to turn books, newspapers and periodicals into VR experiences, "while providing a new way for advertisers to reach audiences." It didn't say what form the ads will take, but the video shows a user interacting with a 3D car model, so it might let you walk around or closely inspect products that interest you, for example.

Vivepaper will be available for download on Halloween (October 31st) at HTC's new Viveport store for Vive PC and on Android mobile via the Viveport M developer beta. It'll also run on Google Cardboard and other compatible headsets, with an iOS version arriving next year.

In this article: CondeNast, entertainment, htc, Magazines, Reader, video, Vive, Vivepaper, VR, wearables
All products recommended by Engadget are selected by our editorial team, independent of our parent company. Some of our stories include affiliate links. If you buy something through one of these links, we may earn an affiliate commission.