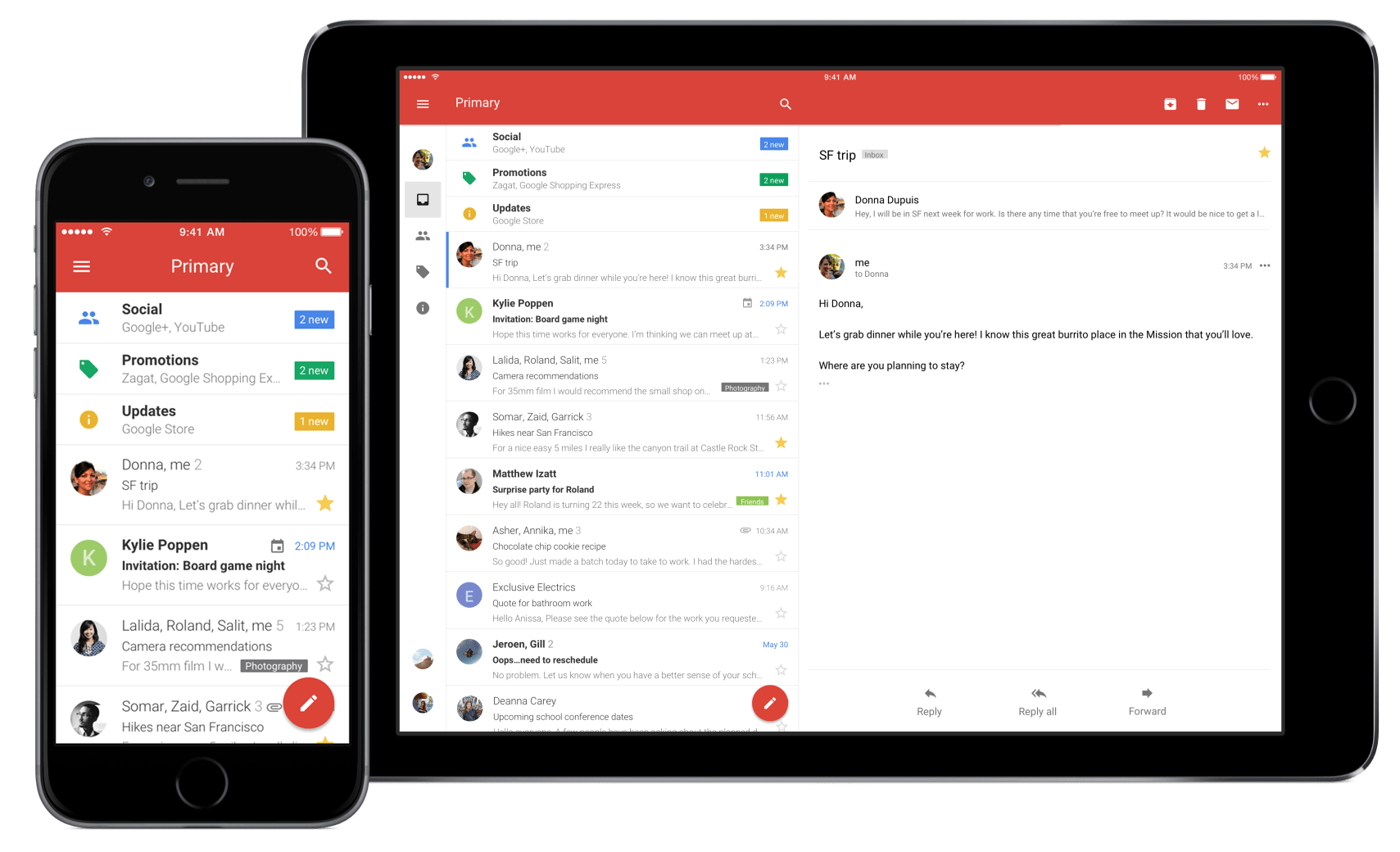 Google wants its services to be on as many devices as possible. To meet that goal, the company has been putting out excellent versions of its apps on the iPhone for years now. That is, except for Gmail, arguably Google's best-known tool beyond search. The Gmail iOS app was essentially broken when it launched back in 2011. A big update in 2012 made things much better, but the app has only changed in fits and starts since then. Its design doesn't fit with Google's current standards and it can be very slow. It gets the job done, but there are better options for accessing Gmail on the iPhone, including Google's own Inbox app.

Thankfully, Google has finally decided it's time to bring Gmail for iOS into the modern era. The new Gmail app for the iPhone and iPad rolling out today and it brings both design and functionality up to part with the Android app. Indeed, the app is basically indistinguishable with its Android counterpart now. The basic feature set is essentially unchanged; you have access to all your Gmail labels and the excellent search feature. You can add multiple accounts, and the app reflects whatever Inbox style you've picked on the desktop (priority inbox, starred email first, the various tabs grouping social, promotional and update emails and so forth). All of this worked in the old Gmail app. It was just much uglier, if we're being honest. Now, the bright colors and animations of Material Design are present, emails have a small avatar showing you the sender, the sidebar lets you switch accounts faster. The whole thing looks better and is more efficiently designed.

The old Gmail also didn't perform like a native app. It reminded me of the old days of app, where many of them were simply a UI wrapper around content being pulled from the web. That made it feel like you were waiting much longer for emails to load than was reasonable in this day and age.

That's all changed now -- there's no doubt that Gmail is much faster than it used to be. And there are a few new features here too. They're not new if you've used Gmail anywhere else, but they've finally been built into the iOS app. First of all, the super-handy "undo send" feature is now available, saving your butt if you fire off an email to the entire company instead of just one person. You can also swipe a message to automatically archive or delete it, depending on your preference.

As I mentioned, the whole app is faster, but search in particular got an overhaul. Now, you'll see search results auto-populate as you type, so you don't have to finish a word or hit enter to find the email you're looking for. Overall, the app feels like a cross between the old, traditional Gmail app and Inbox, which already had these new features. But if you aren't a fan of Inbox's grouping and snoozing features and just want the basic, plain-vanilla Gmail, this app absolutely does the trick.

Google is also bringing a smaller update to the Calendar app for the iPhone today as well (sadly, the update doesn't include iPad compatibility). There's not much here, but Google did add one pretty useful feature: Events, reminders and goals that from your Google Calendar are now integrated into the iPhone's spotlight search. So if you're looking to make Google Calendar your main option over the built-in iPhone option, things should be a little easier. Google also added support for non-Gregorian calendars like Lunar, Islamic and Hindu -- so if you want to see those dates alongside the standard options, that's there. And if you want to quickly see a full week's view, just rotate your phone to landscape mode.

Both the updated Gmail and Calendar apps should be rolling out to the App Store today. If you've been longing for a first-party Gmail app that feels up-to-date in 2016, definitely download today's update. It's been a long time coming, and after a few years using Inbox I might be ready to make the standard Gmail my main email app again. Here's hoping Google keeps updating it in a timely fashion rather than letting languish for years again.

In this article: apple, gear, gmail, gmailforios, google, googleapps, googlecalendar, hands-on, internet, iosapps, mobile, services
All products recommended by Engadget are selected by our editorial team, independent of our parent company. Some of our stories include affiliate links. If you buy something through one of these links, we may earn an affiliate commission.