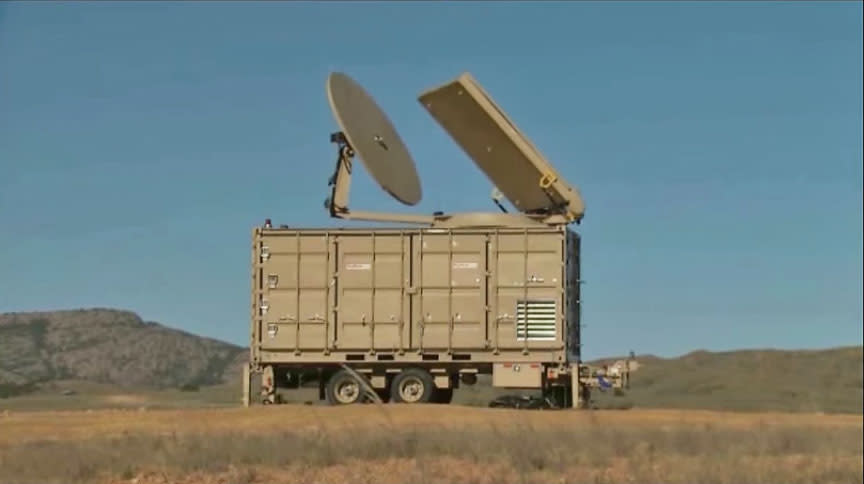 While the US military has enjoyed several decades of aerial dominance with few enemy fighter planes to shoot down, the emergence of ISIS drones presents a new threat to American ground troops. To combat swarms of these cheap, small dangers, the US Army is testing a new anti-air device that is designed to blow multiple UAVs out of the sky in a single shot. They call it the Phaser.

No, it's not a Star Trek-style turret. The Raytheon-built "Phaser" is a microwave-emitting dish that sits atop a shipping container containing its diesel generator power source. It relies on external radar systems to track targets, then fires a burst of radiation powerful enough to fry control systems, enough to knock drones out of the air. While it's functionally similar to radio-based anti-UAV systems like the rifle-style DroneDefender concept, the Phaser shoots a broad swathe of energy wide enough to catch several targets per shot.

The Phaser's electronics-destroying capabilities means it isn't just good at skeet-shooting drones -- it can knock out anything with circuits. That means iPads, computers, targeting systems or even cars speeding toward checkpoints, Popular Mechanics points out. Think of it like an electromagnetic pulse (EMP), the shockwave emitted from nuclear explosions that disables electronics. As the demonstration video below mentions, the Phaser can modulate the intensity of the blast, choosing to disrupt activity or damage a machine's computational innards.

The Phaser began testing in 2013 and has only recently become declassified. But further details, like maximum range, are understandably still hidden. As with most weapon concepts still in the test phase, it's unclear if or when this system will see field deployment.

In this article: defense, drone, microwave, military, science, security, UsArmy, weapons
All products recommended by Engadget are selected by our editorial team, independent of our parent company. Some of our stories include affiliate links. If you buy something through one of these links, we may earn an affiliate commission.