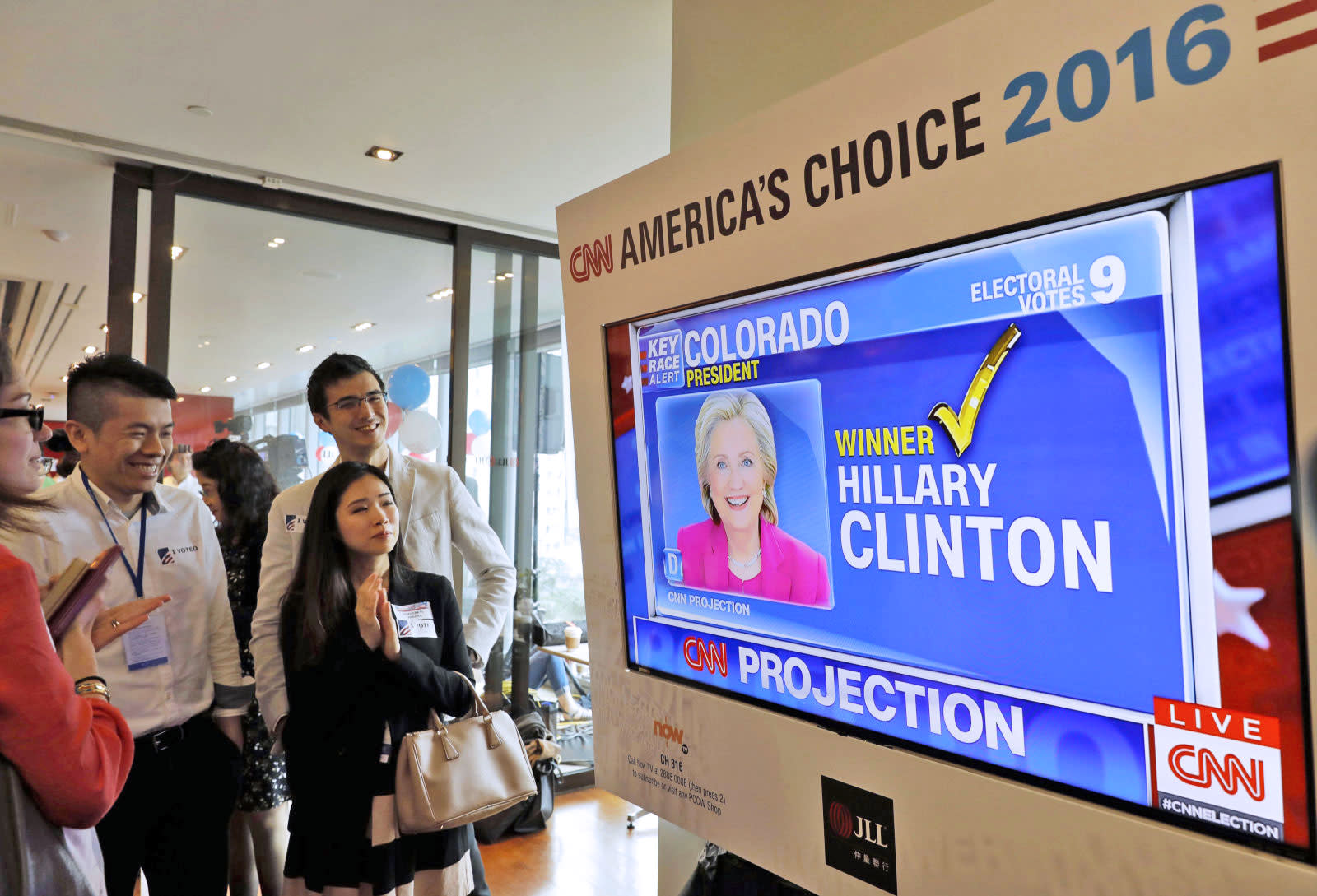 Earthquake science explains why election polls were so wrong

A conversation with the man who predicted the 2016 election -- and every other presidential race since 1984.

Polls are not predictors.

This is the message that American University history professor Allan Lichtman has been screaming at the world since 1981: It's not that the polling system itself is broken -- instead, polls behave exactly as they're designed. The problem is they aren't designed to predict the outcome of elections.

"Polls are snapshots," Lichtman says. "They are not predictors. They are abused and misused as predictors because they're so easy. If you're a journalist, you don't even have to get out of bed in the morning to write a story about the polls and tell where the so-called 'horse race' stands."

Lichtman has accurately predicted the winner of the nine US presidential elections since 1984, relying on his 13-point Keys to the White House model. He even got it right this year, when most pundits and polls were wildly, disastrously incorrect. But Lichtman didn't just get it right; he predicted in September that Donald Trump would win the presidency, more than a month before Election Day. That was also before a swathe of potentially game-changing October surprises rocked the news cycle, including a tape of Trump bragging about sexually assaulting women and FBI director James Comey reigniting conspiracies about Hillary Clinton's use of a private server as Secretary of State.

Despite these massive revelations and in direct opposition to nearly every pre-election poll, Lichtman stuck with his September forecast: Trump was going to win the presidency. And, he did. For most pundits, commentators and voters, it was a shocking result.

"And, this is not the first time," Lichtman says. "Maybe this is the most spectacular instance, but of course, you know we also had 1948, when all the polls pointed to Harry Truman losing to Tom Dewey. We had the last -- in 2012, when the points were inconclusive. They didn't predict a four-point Obama victory in an electoral college near-landslide. In 1980, the polls didn't predict a Reagan landslide."

And when Lichtman says "landslide," he means it.

The Keys to the White House

Lichtman's prediction system is founded on geophysics, using the fundamental ideas of earthquake science to predict social and political disruption. He created the Keys to the White House system with Vladimir Keilis-Borok, founder of the International Institute of Earthquake Prediction Theory and Mathematical Geophysics, in 1981.

Essentially, Lichtman and Keilis-Borok changed their thinking about elections. They applied geophysical terms to the process, getting rid of ideas like Democrat, Republican, liberal and conservative. Instead, they reinterpreted the system in terms of stability and upheaval. Stability means the party currently in power remains, and upheaval signals a change in ruling party. Here's how it works:

There are 13 keys, or scenarios, that have a true or false value. These are things like, "There is no sustained social unrest during the term," and "The economy is not in recession during the election campaign." When five or fewer keys are false, the incumbent party wins. If six or more are false, the challenging party wins.

Using this model, Lichtman has accurately predicted every election since 1984, sometimes years in advance. So even though he predicted the 2016 results more than a month ahead of time, Lichtman was relatively late this year. That's Trump's fault.

"It was an unusual election," Lichtman says. "On the one hand, you had Donald Trump, the most unusual candidate we've ever had. We've never had a candidate with no history of public service and a history of enriching himself at the expense of others."

He cites a handful of scandals that should have ended Trump's campaign on the spot, including his refusal to produce his taxes, the fact that the Justice Department accused his business of engaging in racist housing practices, and his history of attracting allegations of sexual assault.

"In 2012, Herman Cain for a while was the favorite for the Republican nomination," Lichtman explains. "Three or four women came out and accused him of sexual harassment and it drove him out of the race. A dozen women have accused Donald Trump of sexual harassment or assault, he bragged about it, gave a blueprint of how he did it, and he still survived."

Throw in the numerous other ways in which Trump is an unprecedented candidate, add a dash of Hillary Clinton's email scandal, and 2016 was a tricky year to predict. Still, when the majority of pundits, analysts and pollsters were wrong, Lichtman's model got it right.

Part of that comes down to Lichtman's knowledge of American political history. Every key value is decided in context, using decades of elections, close campaigns and policy information to inform his decisions.

"I didn't just randomly look at past presidential elections to see what patterns are associated with victory and defeat for the party holding the White House," Lichtman says. "Rather, I was guided by a theory based upon my previous study of history for many years. And that theory was that elections are primarily referenda on the strength and performance of the party holding the White House."

This is not how polls approach presidential elections.

Why the polls are wrong

"First of all, I have nothing against the pollsters," Lichtman says. "A lot of them are friends of mine; they're perfectly good, competent people. It's not that the pollsters did anything wrong. It's that there are inherent problems with the polls and particularly with how the polls are used."

He begins his explanation with this caveat because he doesn't hold back when critiquing the political polling system or the way the media covers polls. After 35 years of telling journalists, students and peers that polls are not and can not be predictors, they still dominate the election conversation.

Lichtman sees value in polls as snapshots of the country's feelings, and nothing more. They simply aren't designed to be predictors, he argues, for three critical reasons:

Algorithms designed to measure voter turnout only provide a probability, not an actuality, of who will cast a ballot. This is a built-in error, Lichtman says. Plus, when reporting on polls, pundits and journalists will note error margins of plus or minus 3.5 percent, for example, a practice that lends false credibility to the numbers.

"That is entirely misleading because that's just the sampling error," Lichtman says. "That is, the error that covers the fact that you're not looking at the whole population, you're only looking at a sample within the population. It doesn't take into account any other type of error."

"Nate Silver and others commit -- and I think this is something really important -- what I call the fallacy of false precision," Lichtman says. "They give you these very precise estimates; Nate Silver would say something like, 'There's a 71.4 percent probability of a Clinton win.' It's sounds really precise and really scientific. In fact, there's no science behind it at all. Nate Silver does not do any independent scientific analysis, Nate Silver is a clerk. He simply compiles poll data. And, to the extent the poll data is not entirely accurate, those probabilities are not going to be entirely accurate. If you build a castle based on sand, the castle is going to collapse." (We reached out to Silver for a response to Lichtman's polling thoughts but have yet to hear back.)

Make no mistake, Lichtman is not saying that polls themselves are broken. They're driven by complex calculations to provide the best snapshot that they can. Polls function as they're designed, but they're misused as predictors by pundits and journalists, largely because it's easy to build a story around them, Lichtman says.

"Pollsters make huge amounts of money doing what they do," he explains. "And the media has to write a story every day. ...Without the polls, you wouldn't have this day-to-day horse race drama to pontificate about and to report. This is when the broadcast outlets and others make their money, covering these elections. So absolutely, it's been driven by the power of money." "There's a built-in dynamic to all of this; it's not by accident that the pollsters and the media have this intimate dance with one another," he says.

It's unclear how much the major broadcast networks will make directly from their coverage of the 2016 election, but it's estimated that the candidates spent $2.8 billion on ads for local television alone. This is actually a decline from 2012, mostly due to Trump's focus on digital ads this cycle. In May 2015, Tribune Company CEO Peter Liguori, the head of one of the nation's largest media conglomerates, said he expected $200 million in political advertising revenue this election cycle, up from $115 million in 2012.

"Pretty much you can explain anything in life by sex, power and money," Lichtman says.

Here's something that Lichtman and Silver agree on: The popular vote and electoral college are increasingly divergent.

The rift between the electoral college and popular vote is exemplified by New York and California, two large and overwhelmingly Democratic states. Essentially, they pile up millions of useless popular votes.

Republicans simply aren't concentrated in particular states on the same level as Democrats. Texas is the closest example, but it's far more competitive than California or New York.

"Small victories, as we saw for Trump in Michigan, Pennsylvania and Wisconsin, count for vastly more than these huge majorities that the Democrats pile up in New York and California," Lichtman says. "We have a severance of the popular vote and the electoral college. Obviously in a big-win election, that's not going to happen, that doesn't matter. In any close elections, you're going to see the popular vote and electoral college vote diverge if Republicans win." This is yet another reason Lichtman's 2016 prediction took longer to calculate than previous elections.

"That didn't change my keys, but it kind of led to a rethinking of how I interpret the keys," he says.

If Lichtman were in charge, US election cycles would look completely different.

"I would take all the pollsters during the election cycle and send them off to a beautiful Pacific island for a very nice, long vacation," he says. "Then, I would tell the candidates, 'Completely revise the way you campaign. The way you campaign is useless and detrimental.'"

For one thing, negative ads don't work, he argues.

"If negative ads worked, Hillary Clinton should have won in a landslide," he says. "She had vastly more negative ads, vastly more ads period than Donald Trump. So get rid of all the negative ads. People hate them; they don't help you win."

This perspective is shared by many election scholars and researchers, but officially, the jury is still out on whether attack ads help or hurt a candidate. Campaigns keep using them, which suggests that high-level strategists see value in going negative.

Also in Lichtman's perfect poll-free world, candidates would focus on building a blueprint for governing. They would discuss policy proposals in terms of the big picture and minute details. This is what the public wants, after all, and actually governing well is the best way to get reelected, Lichtman says.

Of course, alongside the negative ads, Clinton ran a relatively positive campaign packed with details about her proposals and a clear vision for the country. Still, she lost -- and Lichtman predicted it. That's one reason his system features 11 keys about the context of the election and only two keys relating to the candidates themselves. Individual candidates can sway his results only if they're exceptionally charismatic or a national hero, and that's it.

Back in the real world, miles away from a fictional island filled with vacationing pollsters, Lichtman has a message for voters themselves. It's the same one that he's been touting for the past 35 years:

"Forget the polls. Forget the pundits. Forget the day-to-day events of the campaign. Keep your eye on the big picture. Look at the implications of the leadership and policies of these candidates to the future of the country. That's what really matters. All the rest is fluff."