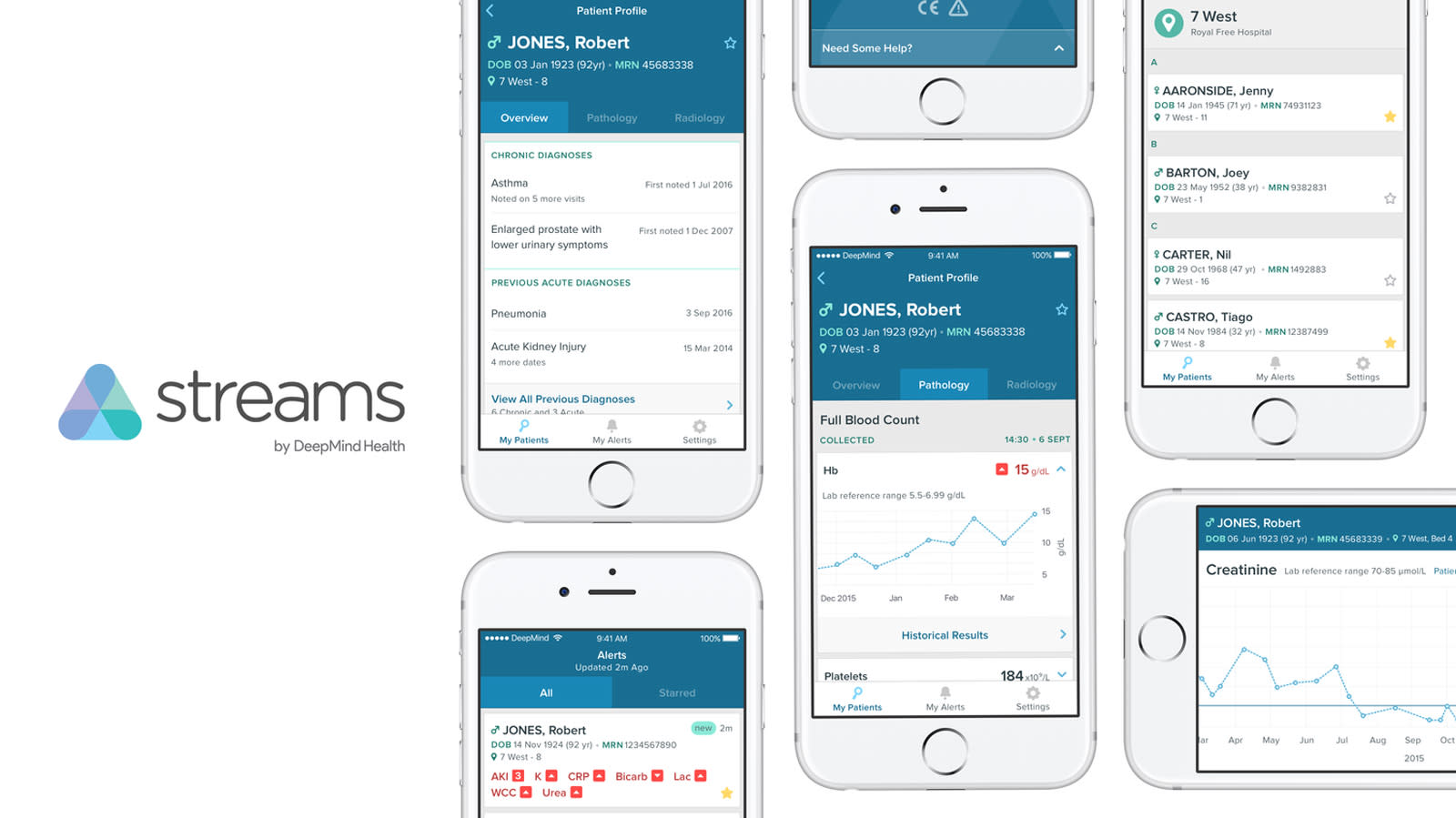 Google and the Royal Free London NHS Foundation Trust have announced a fresh five-year collaboration today, which will see the former's DeepMind AI used to improve patient care across the trust's various hospital sites. The partnership will focus on Streams, a mobile app the pair have been working on since late last year that's been approved as a medical device by the UK's health regulator. DeepMind will analyse blood test results as they come in and flag when patients might be at risk of acute kidney injury, proactively alerting carers through the Streams app.

It'll go live across the trust in early 2017, and there are plans to expand the blood analysis to look for signs of sepsis and other causes of organ failure. The pair hope to add messaging and task management features over the course of the collaboration too, and Streams is said to be built on open standards that will allow other developers to easily add new services. The general idea is to significantly speed up response times, improving the treatment of kidney injury before it progresses any further.

Streams should also free up time for carers to do what they best -- over half a million hours per year, apparently -- which would otherwise be dedicated to admin and jumping between multiple paper-based and aging computer systems.

Google's DeepMind AI has famously beaten a Go world champion, improved data centre efficiency, been trained to mimic human speech, and is currently learning how to play Starcraft II. In the UK, the DeepMind Health initiative was set up earlier this year to work with the NHS on healthcare applications. In addition to the Streams project, DeepMind is being used to improve the treatment of ocular diseases and head and neck cancer at Moorfields Eye Hospital and the University College London Hospital, respectively.

Google and the Royal Free London NHS Foundation Trust may have partnered with the best of intentions when they originally started working on Streams, but the pair have drawn flak over the sheer amount of data being shared between them. Earlier this year, it came to light that DeepMind had access to the personal data and medical history of the trust's 1.6 million patients. This makes sense because healthcare is complicated, and all that information is necessary to evaluate treatment options.

It wasn't just the wealth of information being shared that inspired criticism, though, but also that the data-sharing agreement was established with implied consent from patients, and with little oversight. Ethical, privacy and data protection concerns have all formed part of the discussion, and the UK's Information Commissioner's Office confirmed it was looking into the agreement earlier this year.

The debate continues, and the DeepMind website attempts to explain at length how data security and privacy are protected. Within the Streams announcements today, both parties also describe how seriously they are taking data protection under the new five-year collaboration. DeepMind's data centres have already passed NHS audits, and will be subject to more carried out by independent experts, who will also look at the Streams software.

Everything will be logged for the benefit of the trust, too, so there will be transparency around who, when, where and why patient information is accessed. "The data can never be combined with any Google services or accounts under any circumstances," the trust's release states, and in order to satisfy staunch skeptics, the new data-sharing agreement with DeepMind will also be published for all to scrutinise.

In this article: ai, ArtificialIntelligence, deeplearning, deepmind, google, healthcare, medicine, mobile, nhs, science, streams
All products recommended by Engadget are selected by our editorial team, independent of our parent company. Some of our stories include affiliate links. If you buy something through one of these links, we may earn an affiliate commission.