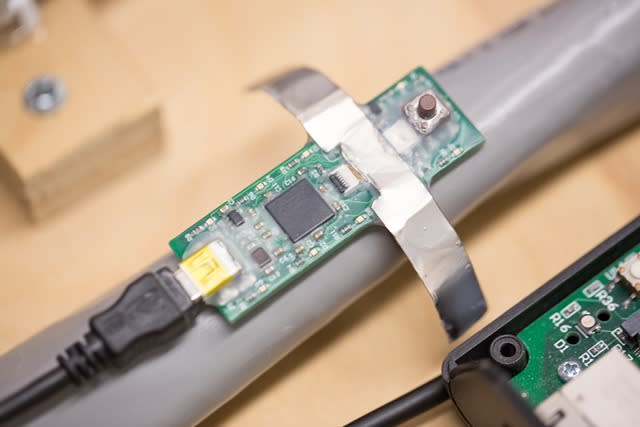 You get a bill from your electricity provider every month laying out how much energy you used, but there's no easy way to get a breakdown of which appliances suck down the most juice. But the US Navy has partnered with MIT scientists to design a cheap, portable sensor network that tracks the power drain of each of your domestic devices.

The system consists of five postage stamp-sized sensors placed above or near power lines coming into the house, which can pinpoint each light fixture or appliance based on its power use. It pipes that data to an app in real-time, allowing folks to see when their refrigerator goes into a defrost cycle, for example.

"There are already ways to monitor household energy use, but they involve hiring a licensed electrician or cutting through power lines or pipes to attach expensive, specialized equipment," MIT engineering professor and head of the project Stephen Leeb said in a press release. "With our system, you can install non-contact sensors using zip ties or even velcro, and use signal processing to measure power consumption. It also could serve as a way to tell when equipment needs maintenance or replacement."

Obviously, civilians would get a kick out of granular breakdowns in their electricity use every month. But the same power monitoring could allow remote forward military bases to manage their energy and fuel use to operate for longer periods. They could even be used on the water: Leeb is conducting tests on three US Coast Guard cutter ships, while his partner in the project, assistant professor at the U.S. Naval Academy John Donnal, will test the system on some of the school's training ships.

In this article: electricity, energy, gadgetry, gadgets, gear, OfficeOfNavalResearch, power, UsNavy
All products recommended by Engadget are selected by our editorial team, independent of our parent company. Some of our stories include affiliate links. If you buy something through one of these links, we may earn an affiliate commission.