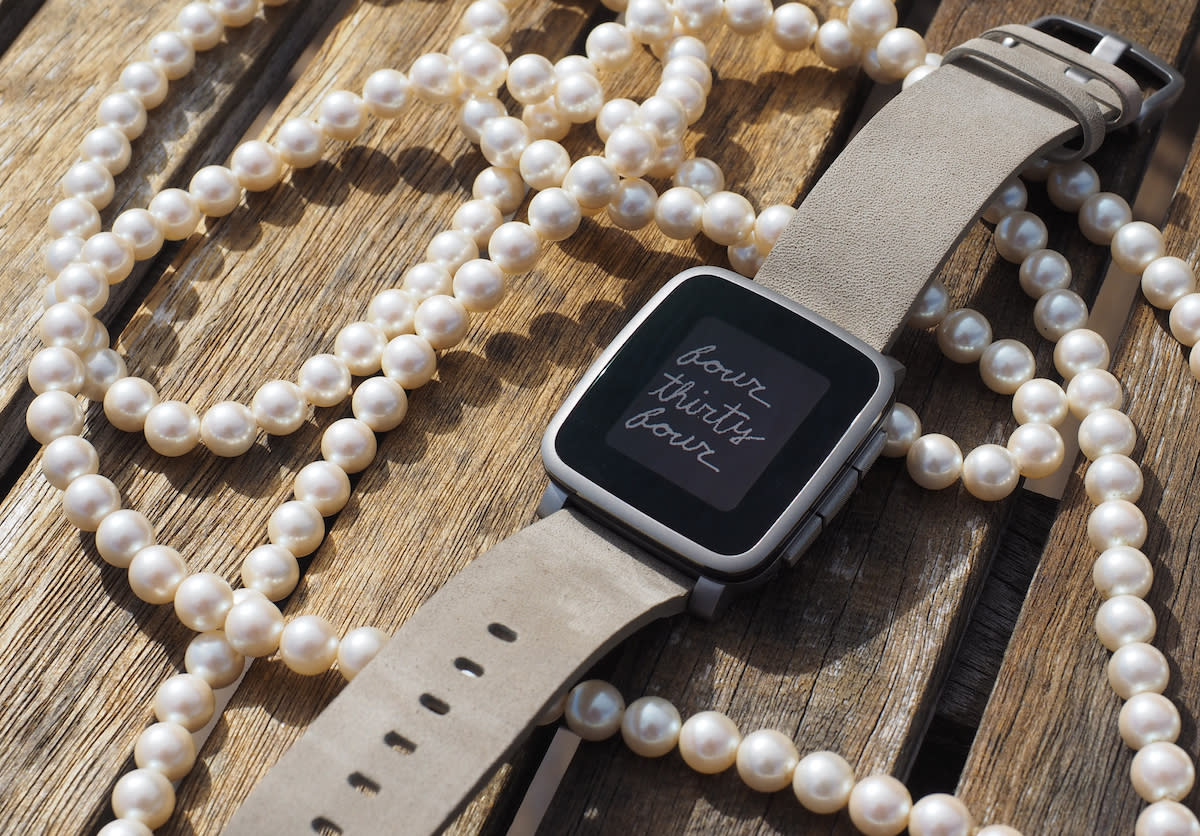 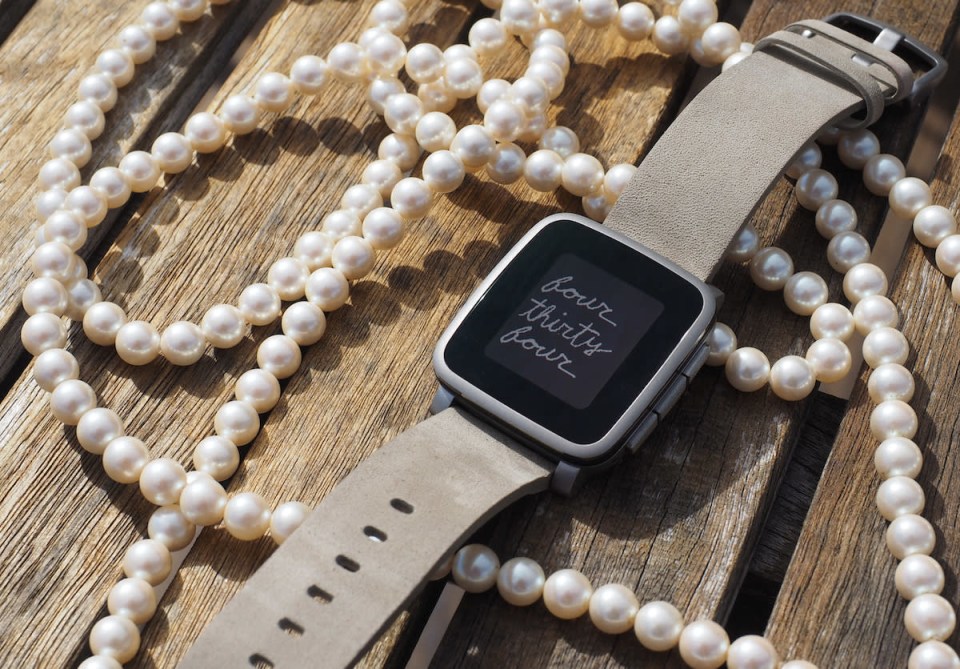 Before Android Wear and the Apple Watch, there was Pebble. The original Pebble smartwatch was, in many ways, a trailblazer. It was one of the first to play nice with the iPhone, it had downloadable watchfaces so you could switch up the look anytime you wanted, and it was the first gadget to bring in millions of dollars via Kickstarter, putting the crowdsourcing site on the map. Pebble's luster faded over the years as more sophisticated, feature-rich wearables came on the market.

Still, the company kept going, thanks to a loyal fanbase, making Pebble something of a cult favorite. Now, thanks to this week's Fitbit acquisition, Pebble is going away, living on only in the form of patents and software code. As it turns out, Engadget editors have been harboring strong feelings about the underdog company. Join us as we say goodbye -- or, in one case, good riddance.

I got in on the ground floor, buying the first Pebble watch through its debut Kickstarter campaign. It was the "Founder Edition," which meant I got it ahead of some other people, and it bore some not-that-fancy embossed lettering on the back of the case. Pebble was the poster child for both the initial smartwatch boom as well as crowdfunded electronics in general.

It was hugely popular. Several times. Personally, I was excited by the prospect of the first Pebble and wore it for several months, with updates adding tiny nuggets of extra functionality. But it was never quite enough. And my zeal for smartwatches blinded me to the fact it looked lumpy and felt cheap. (In its defense, I only paid $125 on Kickstarter.)

My initial enthusiasm soon died out, exacerbated by the fact that the rubbery strap was uncomfortable to wear during the summer -- which was when my early model eventually arrived in the UK. The Pebble wasn't perfect or even great, but it was the start of smartwatches as we know them. It was only a matter of time before the big tech players jumped on the bandwagon. We dear consumers had already bought into our smartphones; this was the value-add second gadget that the likes of Samsung, Sony and Apple wanted us to want. The jury is still out on smartwatches being the next big thing, but Pebble was a plucky startup brave enough to test the waters -- and I have to respect it for that.

Farewell, Pebble. You made the only smartwatch that ever fit under the snug sleeve of my favorite winter coat. You made me defend the advantages of having an e-paper screen that wasn't even touch-sensitive. You made me learn how to operate a whole new smartwatch OS just so I could wear the Pebble Time Round every day.

I rejoiced when you added voice-dictation features, no matter how limited they were. I was excited to try out the new generation of the Pebble Time Round (although I never got to), and I was psyched to take the Pebble Core out for one of my extremely rare runs through Central Park.

Alas, I probably won't ever get to do that. I won't be able to see what it's like to order an Uber from a tiny black box that doesn't even have a graphic user interface. I won't get the chance to brag about your low prices and comprehensive features to my friends. And saddest of all: I won't have any new Pebble products to look forward to reviewing in the future. Goodbye.

It seems only fitting that, as interest around smartwatches cools, Pebble ends up dying. It was one of the first truly successfully Kickstarter campaigns, and the hype around it made it seem as if smartwatches were the next big thing. As it turns out, that's not true.

Though the Apple Watch represents one of the best attempts at making a compelling wearable, it's mostly been a disappointment. And despite many solid Android Wear devices on the market, none of them have taken off. Even though Pebble had a head start on those platforms, it failed by not finding much of an audience beyond the geek faithful, as well as by not innovating much beyond its initial release. It's a shame to see the company go down, but I'm hoping that Fitbit finds some way to integrate its best aspects in its fitness wearables, which have proved much more useful than stand-alone smartwatches.

Even though Pebble has faced stiff competition in recent years from fancier smartwatches that boast a lot more features, I've always had a place in my heart for the plucky e-paper wearable. While its rivals piled on the bling, Pebble opted to be sensible, with a design that prioritized long battery life and an always-on display above silly widgets few people would actually use. If all you needed in a smartwatch were notifications and the ability to tell time, the Pebble was more than enough, for a far more affordable price than most of its rivals.

Further, while some might denigrate Pebble's design, I was a big fan: I liked the look of the Time Steel, and I was over the moon with the design of the Time Round. I maintain that to this day, the Time Round's slender strap, ultrathin chassis and circular face make it one of the most stylish smartwatches ever made.

I owned a first-generation Pebble, and it put me off smartwatches for years. it was slow to respond, it felt tacky on my skin, and, most damningly, it was ugly as sin.

When the Pebble Steel came, my boss at the time heralded its improved looks. I wasn't sure if we were looking at the same watch. An awkward mix of a rounded square body, sharp triangular lugs and a dollar-store steel strap, it was atrocious to look at and not particularly nice to wear.

Pebble's design never improved. The Time attempted to ape Swatch's famously fun design language but failed. Actually, due to a weird two-step bezel, some poor lug design and Pebble's always awkward side buttons, it might have been the ugliest of the lot.

Strangely, I was somewhat taken with the Watch 2, which at least addressed the awkwardness of the off-black display bezels by adding a splash of color. I mean, I'd never wear one, but I sort of got it.

We all owe Pebble a debt of gratitude for sparking interest in smartwatches. I won't deny that. But that's where my fondness for the company ends.

In this article: editorial, fitbit, gear, opinion, pebble, wearables
All products recommended by Engadget are selected by our editorial team, independent of our parent company. Some of our stories include affiliate links. If you buy something through one of these links, we may earn an affiliate commission.