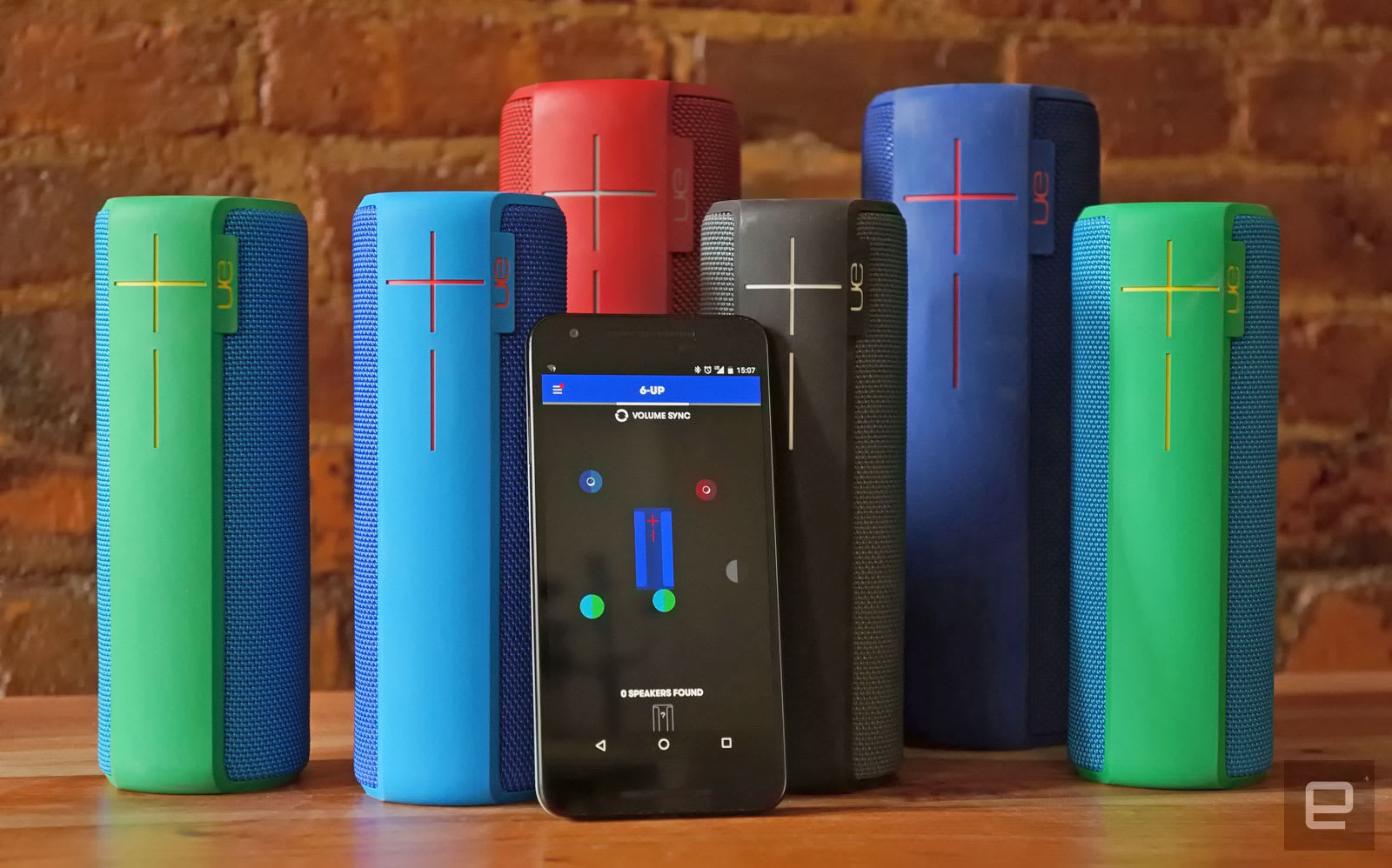 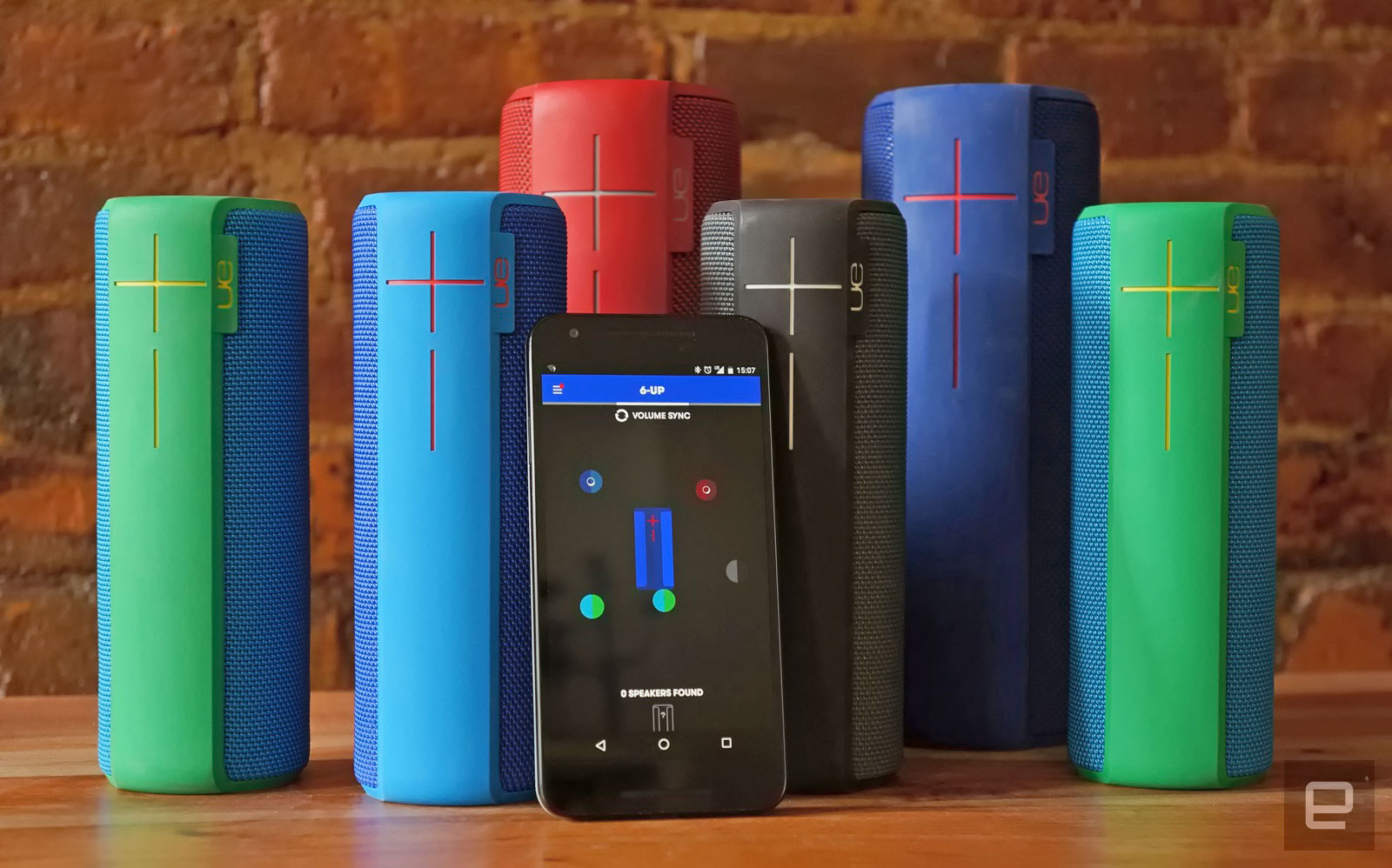 Ultimate Ears' Boom and Megaboom Bluetooth speakers have been some of our favorites in recent years, and if you or your friends picked one up, today's new software update may surprise you. The company is launching a revamped app interface and OTA firmware update that now allows you to pair far more than two UE speakers at a time. This new feature is called PartyUp and leverages Bluetooth Smart LE to let you see, remotely turn on and add nearby speakers to your audio output. The company claims you can easily add up to 50 at once, provided they're all running the new firmware. To help kick off the party, you can pick up speakers from the company's website at a discounted rate in groups of five or ten, which will be offered through the holidays. Once you launch the app and swipe into the PartyUp screen, it will automatically scan for any available speakers and list them at the bottom of the screen. You can then simply drag and drop them onto the main area, where they'll display as either a full speaker icon (if just doing stereo) or small discs for three or more speakers. They'll display with a loading icon in the center until they're fully connected, or occasionally drop back into the found speakers list if the pairing didn't work the first time. 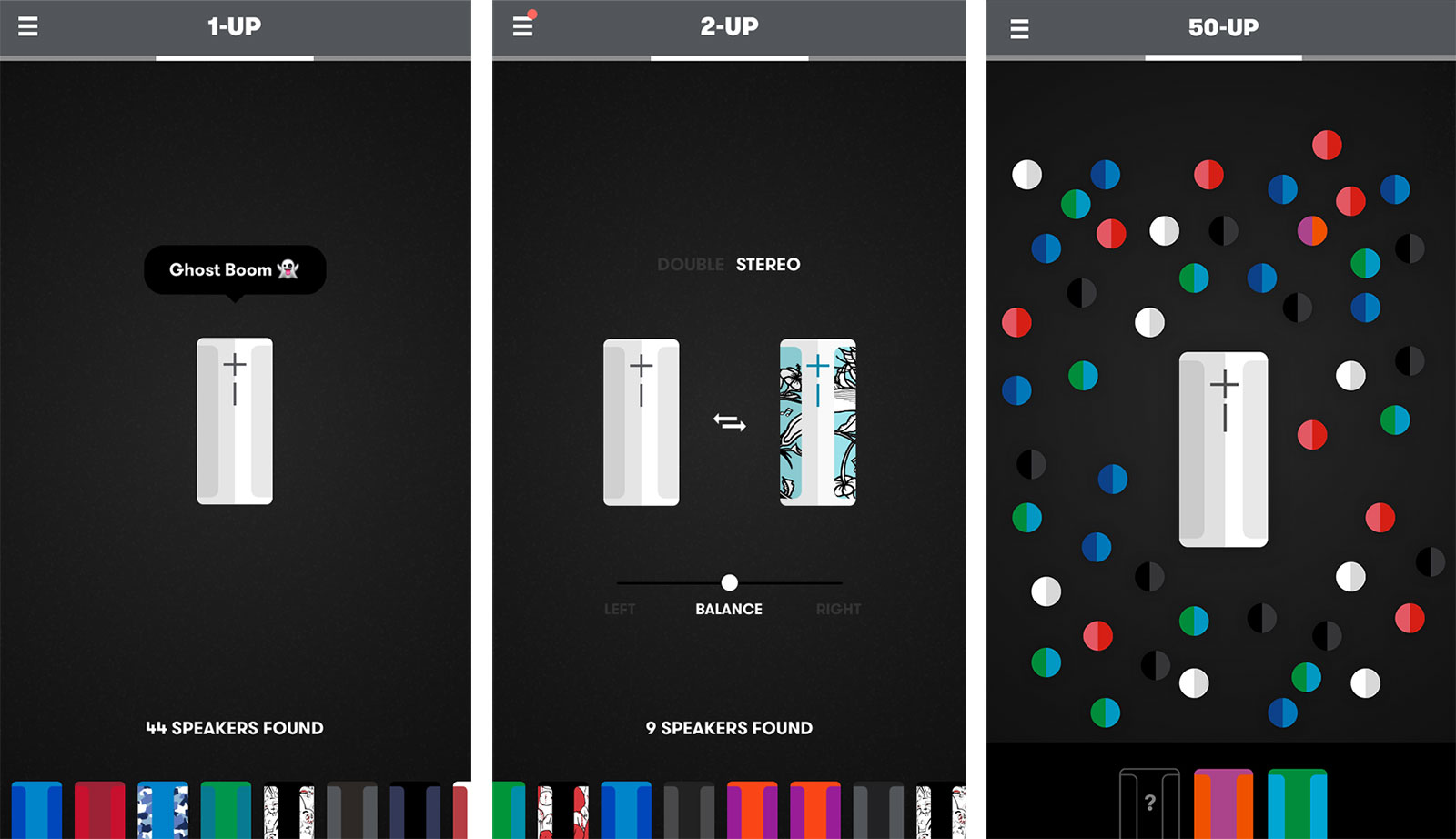 The design and interface is much improved over previous iterations, although it's not a drastic overhaul. Connectivity and pairing is generally better too, although we're at the mercy of Bluetooth, so there's still a few potential hurdles. I was initially shown the feature on an iPhone 6 and it seemed to work near-flawlessly, finding 10 nearby speakers quickly and adding them to the group, even if they were powered off at the time.

My subsequent tests were done using a Nexus 5X running Android 7.0, with mixed success. Sometimes I had to toggle Bluetooth on and off a few times to get things going. This happened a few times during my tests and isn't a particularly new occurrence, at least with handset I've been using. Once the app connected to the main speaker and found the other devices nearby, things proceeded smoothly, for the most part. As you can see in video below, it took some time to load and a few tries to get them all connected. 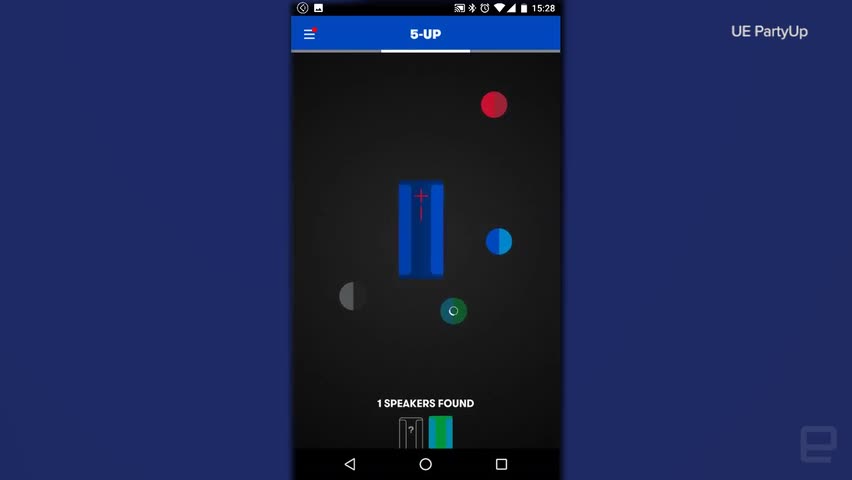 Individual speaker volumes can be adjusted while part of the PartyUp output. However, this will add a Volume Sync prompt at the top of the app to allow the person in charge to bring them all up to the same volume again.

This is, by the way, a free update and works for all Boom, Boom 2 and Megaboom speakers. Unfortunately, the Roll and Roll 2 don't have enough on-board memory to join in and if you want to use the Block Party feature in the app, you're still stuck with a maximum of two speakers (which the Roll can handle just fine).

It's hard to say how many people will have access to enough speakers to really put this feature to the test, but I tried it with two Megabooms and five Boom / Boom 2 speakers. The experience feels immersive, especially if you crank it up indoors. On a large outdoor roof deck, they also pumped out enough volume to consider using for a large group or dance party, so invite your friends to bring a UE speaker along. I've yet to see if crowds of people would interfere with the Bluetooth connection or not, though.

While UE casually says you can pair up to 50 speakers at once, it's said that it has broadcast to 150 in a test environment, which was all they had on hand. Keep in mind, this all works by being broadcast from a single host speaker as a one-to-one connection for each additional unit instead of any daisy-chaining. That's pretty impressive and we've only noticed a couple other systems that go beyond pairing two units, like the Bayan Audio SoundScene, which pairs up to eight.

It's worth noting that you can bypass the app and pair multiple devices manually, in the same manner as before. Just press and hold the Bluetooth and plus volume button on the host speaker until you hear the pairing bongo sound, then double click the Bluetooth button on any nearby speakers to hop into the Party Up zone. This is one way you could use a DJ app on your laptop and have a series of UE speakers to flesh out the sound system. However you choose to use this new feature, it's bound to be an interesting -- and potentially loud -- experience.

In this article: av, Bluetooth, gadgetry, gadgets, gear, logitech, mobile, UE, UEBoom, UEBoom2, UEMegaboom, UERoll, UERoll2, UltimateEars
All products recommended by Engadget are selected by our editorial team, independent of our parent company. Some of our stories include affiliate links. If you buy something through one of these links, we may earn an affiliate commission.