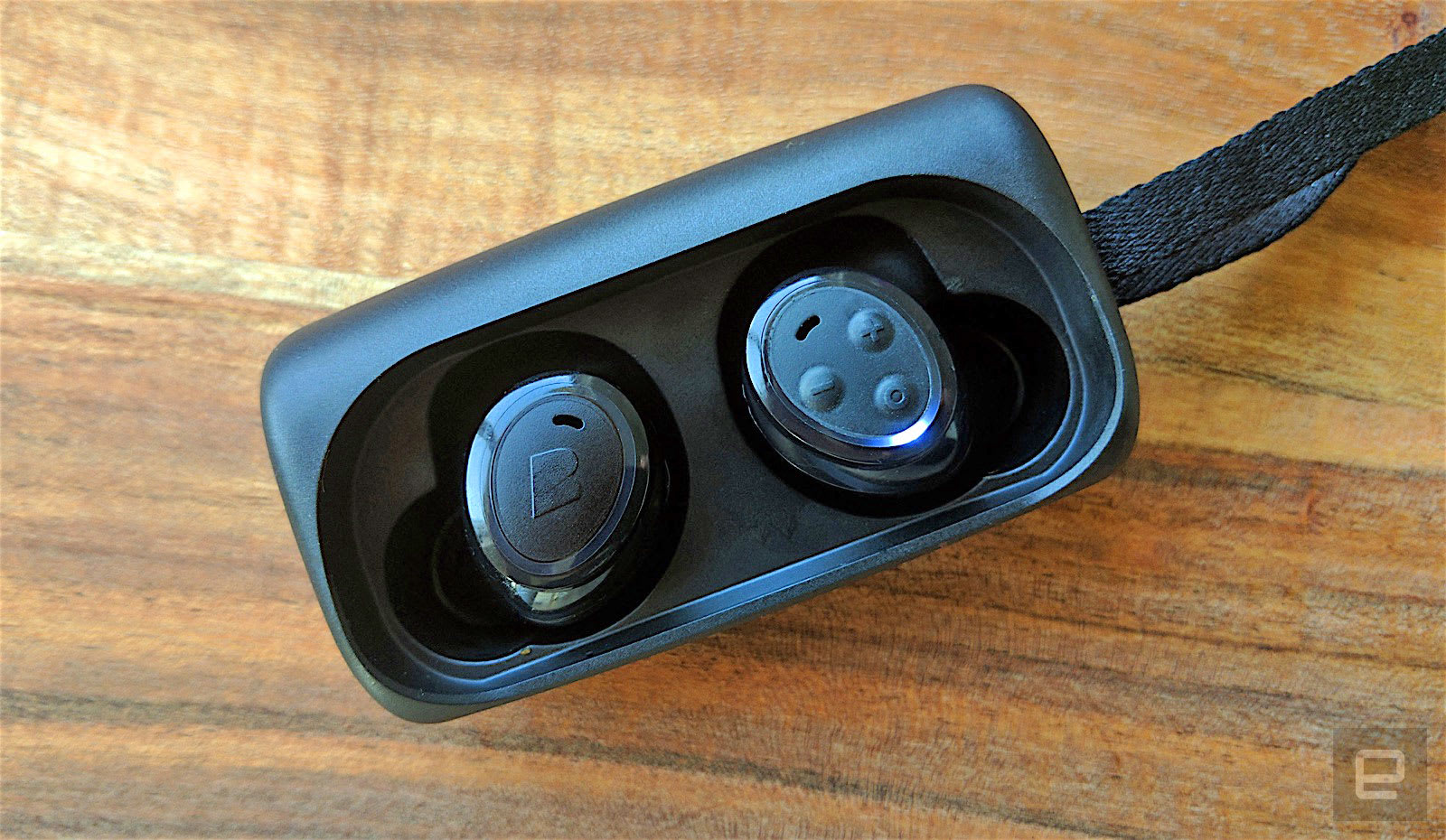 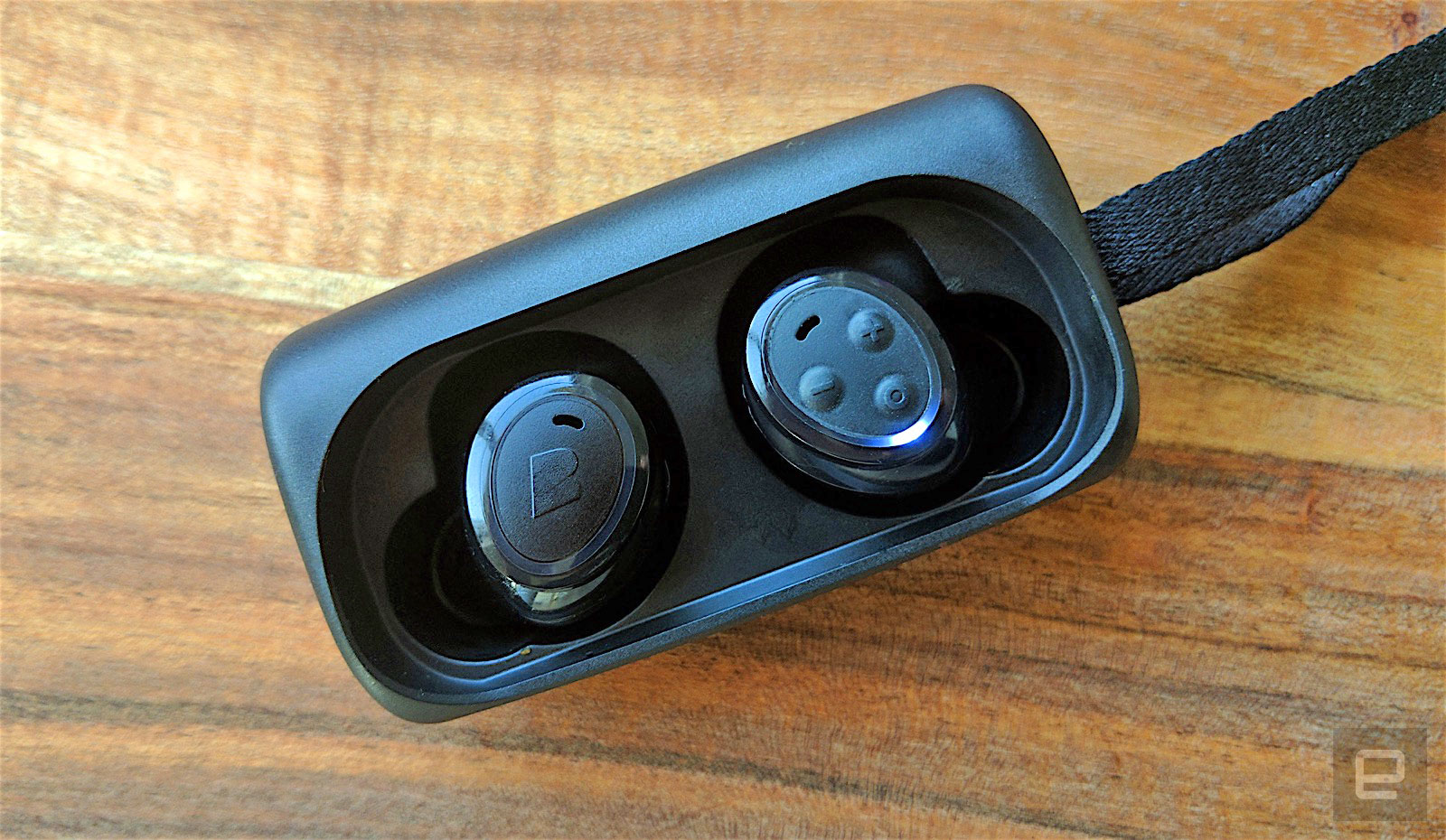 Almost three years ago, Bragi left an indelible mark on the headphone universe. The then-unknown company launched a pair of "truly" wireless headphones on Kickstarter that not only cut every wire, but boasted a slew of fitness-tracking features, all wrapped in a superslick design.

Bragi delivered on its promise, releasing the Dash this summer, but with a few compromises. The fitness features weren't comprehensive enough to be valuable, the microphone wasn't great, and even basic connectivity with phones wasn't very stable. You can't have bleeding edge without a few cuts, though, right?

Enter "the Headphone." These $149 buds look a lot like the Dash, but are a much simpler proposition. The Headphone drops nearly all the smart features, and the result is arguably the product Bragi should have launched originally: a solid pair of truly wireless headphones. The Dash was definitely an impressive opening act, though, and perhaps necessary to earn the company the gravitas to be taken seriously.

The very first thing I noticed about the Headphone is that the build feels cheap compared to the Dash. The Headphone comes in a light plastic case -- not a cold, weighty metal one this time. There's no battery in that case either; it just serves as a charging cradle (and case, obviously). The Dash's smooth, touch-sensitive controls have been replaced by physical buttons on the right bud. There's also no app connectivity with the Headphone, and no onboard storage for music. So why bother? Well, there's at least three very good reasons: connectivity, battery life and price.

Bragi defined the truly wireless headphones category, and many competitors soon emerged. Remarkably, all of them -- almost without exception -- suffered some form of connectivity hiccup. This could be between the buds themselves, or between the headphones and your phone when outside (an issue with the Dash). Some cheaper products presented both problems. 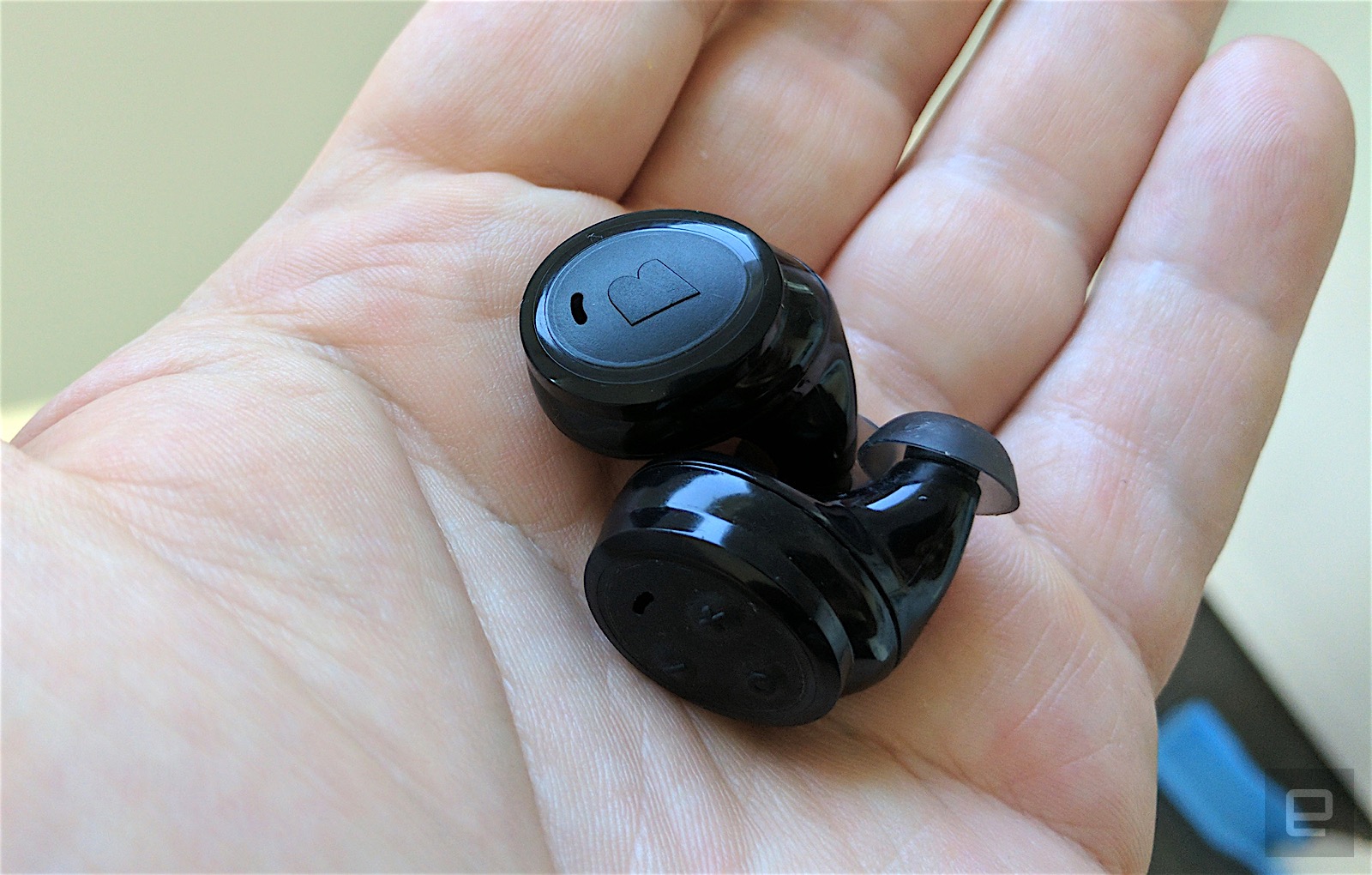 The audio connectivity isn't just better than the Dash; it's better than any "truly" wireless buds I've tried (Erato's Apollo 7 and Earin, to name a few). Importantly, the Headphone's buds never lost connection with each other either -- a common problem with these products. Best of all, unlike similar headsets, Bragi didn't use a design with something hanging out of your ears (looking at you, AirPods) to help ensure good connectivity. Like the Dash, the Headphone sits flush in your ear, making them much more inconspicuous.

One downside to the physical buttons is that they require quite a push to register a click, so you're basically mashing the earbud into your ear each time, which can feel uncomfortable. This mashing effect happens with all three buttons on the right bud. It's a relatively minor annoyance, as you can always use your phone to control the volume, but it's something to get used to.

The lack of fitness features on the Headphone isn't a problem, as there are many other ways to track activity. But I did love the ability to load music onto the Dash and leave my phone at home when going for a run. Not many truly wireless buds offer this -- Samsung's Iconx is one of the others -- but it's a feature that elevates the usefulness of wireless earbuds, especially when music streaming might not be convenient.

A feature the Headphone does have is the "transparency" mode that Bragi helped pioneer. Transparency uses the microphone to blend ambient noise around you (traffic, people talking, etc.) with your music. Handy when you don't want to stop your music, say when buying a coffee. But also a potential lifesaver for cyclists who gotta have their tunes on the ride to work. 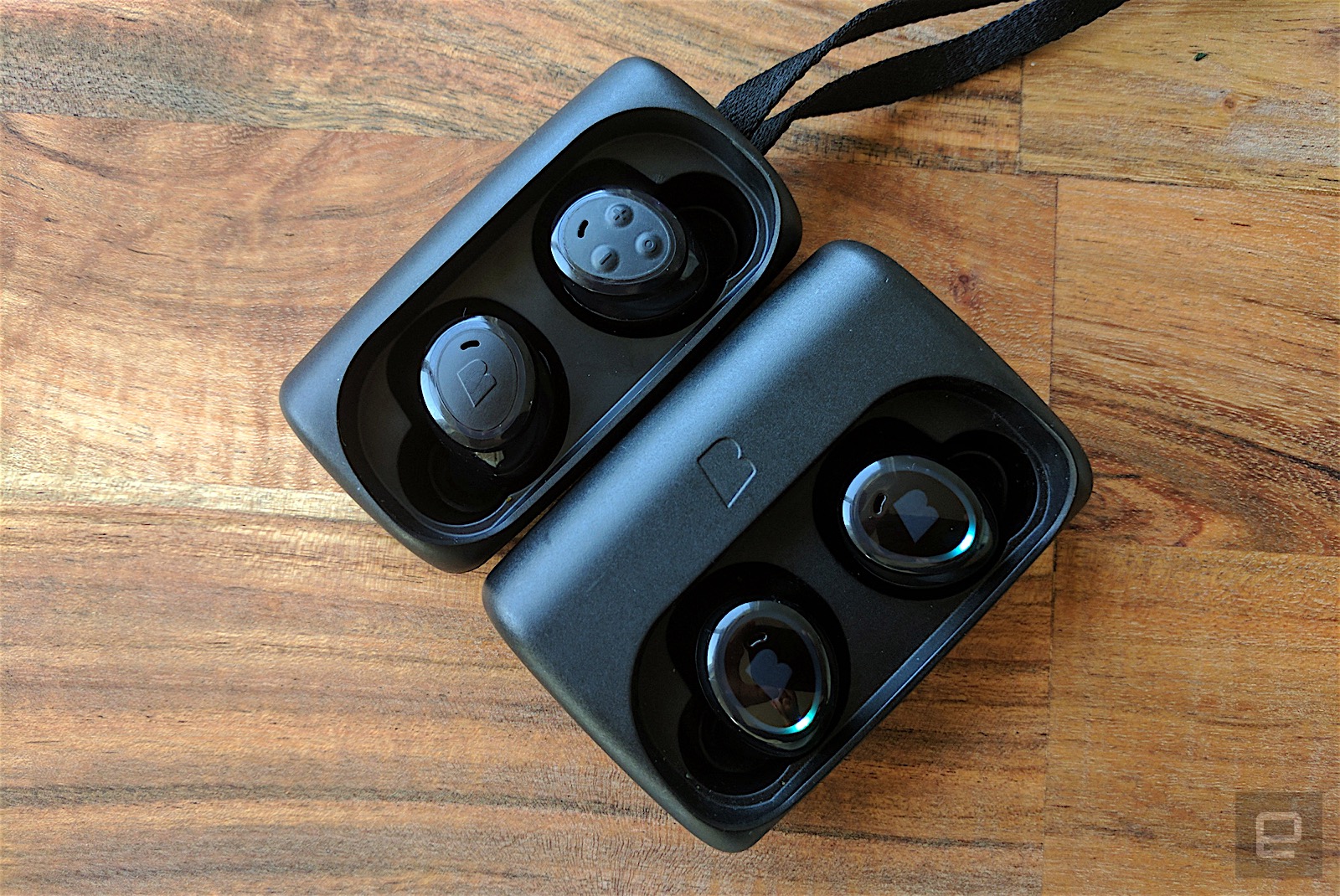 It's definitely a welcome addition to the Headphone's relatively basic feature set, but for some reason, the ambient noise doesn't seem to be quite as audible as it is on the Dash in the same conditions. My doorbell pierces through much less on the Headphone while listening at moderate volume, and sometimes I had to remove a bud to engage in conversation, which is less common with the Dash. Perhaps Bragi reconfigured it the second time around.

More important, music sounds pretty good on the Headphone, but a caveat: Bragi's press materials told me this might not be the audio profile that will be on retail units. The profile on the model I'm wearing right now is fairly neutral. That's to say, it's sounds like there's less emphasis on the bass and the high midrange frequencies (vocals, melodies, etc.), which are commonly ramped up in consumer headphones.

Again, if we're comparing to the Dash, I actually prefer the Dash's audio profile. It feels a little thicker, and has more impact (and a fair bit louder). The Headphone is still a very good listen, and probably more suitable to those who listen to live/acoustic music. My noisy brand of angry dance music just doesn't feel quite as thumping this time around, though.

The microphone, on the other hand, is less impressive. I rang a number of friends and family and didn't tell them I was using a hands-free, and nearly everyone asked me where I was calling from in that "you-sound-different" kinda way. I recorded a few tests on my MacBook using the mic on the Headphone, and they ranged from poor to inaudible. You'll be able to use these to make calls, but it's not a strong suit.

It might seem like there's a lot of things lacking in the Headphone, and to a large degree that's true ... if you compare it to the Dash. Pit the Headphone against most of the competition, and suddenly things look rosier. The general connectivity situation is a great step forward for the category. The audio quality is solid (even if the mic is lacking), and the six or so hours of battery life is pretty decent (though a shame there's no battery in the case).

At $149, the price undercuts Earin's lightweight buds by some $50, and is (no doubt deliberate) $10 less than Apple's AirPods, which is perhaps the competition Bragi's really setting its sights on. With a better battery life, decent audio and enough change to buy yourself lunch, the Headphone should appeal to those iPhone 7 owners shopping around for a wireless set. Especially if Bragi can deliver on it's "November" ship date and beat Apple to market.

In this article: av, bragi, christmas, dash, gear, headphones, review, theheadphone, trulywireless, uk-reviews, wireless
All products recommended by Engadget are selected by our editorial team, independent of our parent company. Some of our stories include affiliate links. If you buy something through one of these links, we may earn an affiliate commission.