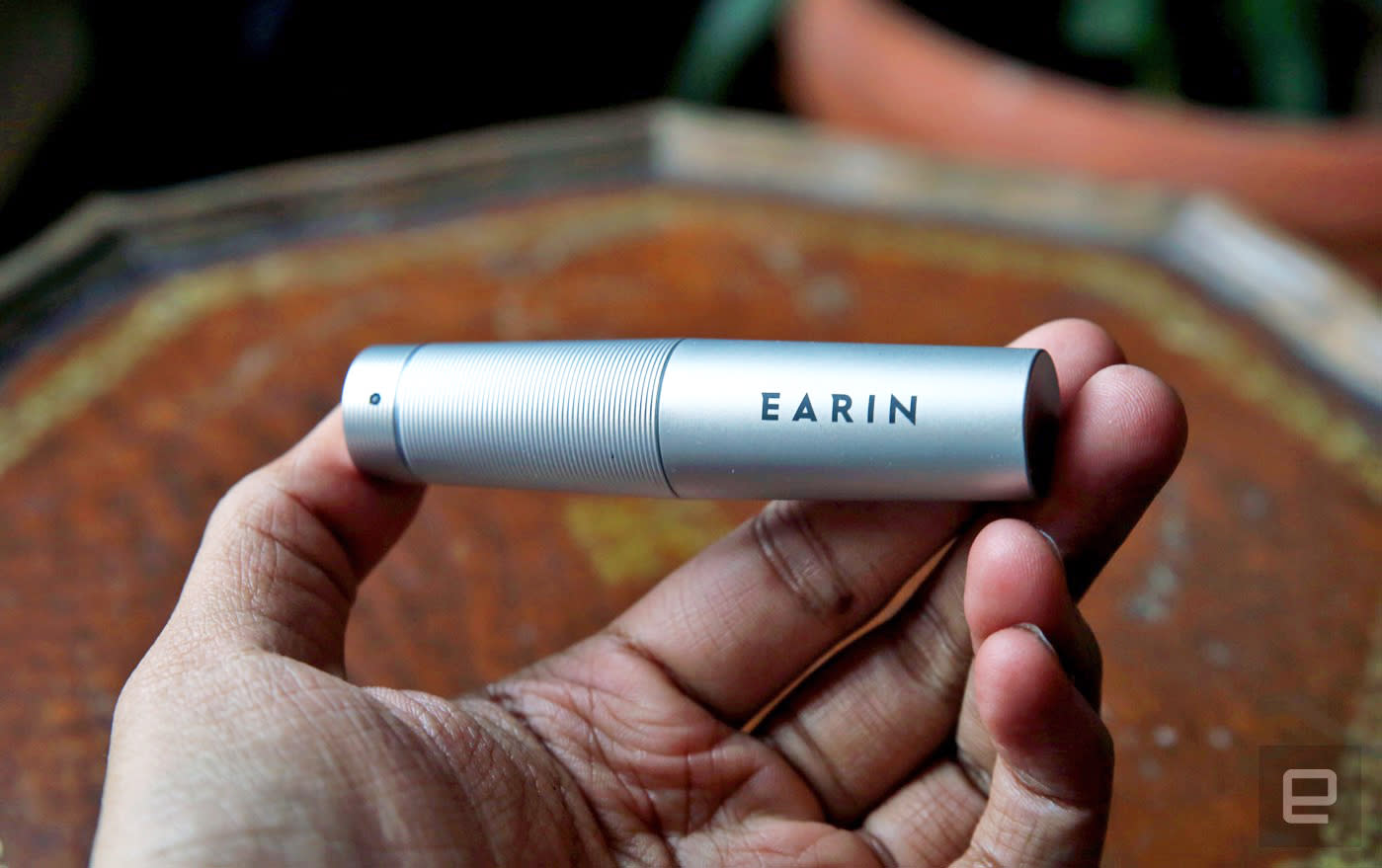 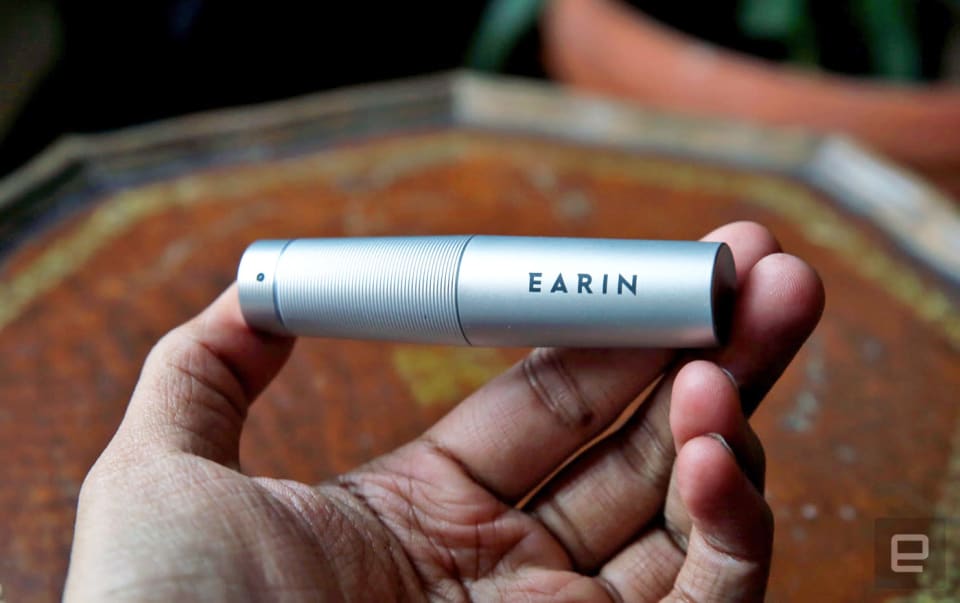 For the past year and a half, Swedish startup Earin has been trying to turn a Ryan Gosling–inspired earbud concept into a proper working product. The hook: Unlike other Bluetooth headsets, these $249 earbuds are completely wireless: They sync with each other and a phone, and... that's it. The concept is one of those things I didn't even know I needed, but after spending a week with the Earin buds, I'm almost ready to pick up my pitchfork and wish death upon the headphone cable. Emphasis on "almost."

The experience starts with a stainless-steel tube and a carrying case/battery into which you stick the buds. Its 600mAh cell should charge each of the buds' 60mAh batteries about three times, and that's pretty much exactly what I saw during my testing. It would have been nice, though, if the single LED indicator on the tube offered up a little more information; the light turns red when charging the buds and just shuts off when done, which left me wondering whether charging was complete or if the case itself ran out of juice. Fits of paranoia aside, the case is attractive and works as advertised. Once you pop the buds out of the case, just pair with your Bluetooth device of choice. There's an Earin companion app too, though all it's really good for is checking each bud's individual charge.

But enough of that: Let's get to how the headphones sound. In a word, adequate. The mechanics of squeezing batteries and radios into these tiny buds means designers had no shortage of constraints, and we're ultimately left with audio that neither stuns nor disappoints. Mids come through crisply and even the highs occasionally get a chance to shine, though your choice of music might not play to the Earin's strengths. Case in point: While the lows usually feel tight and sufficient, bassy tracks come off more subdued than I'd like. To be clear, I'm not one of those people who digs bass lines that thump skulls; my tastes are more modest. Even so, the aural foundation that bass lines build never feels fully formed here, leaving hip-hop and certain kinds of electronic music sounding wimpier than normal. Now, remember that Earin app I mentioned earlier? You can toggle a Bass Boost feature from in there to try and liven up the lower end, but it's generally not worth it. Sure, you'll get some meatier bass, but you're otherwise left with music that doesn't sound the way it's supposed to. Really, it's your music's sense of space -- the soundstage, as it were -- that gets the short end of the stick. Just about all of the tracks I sampled sounded at least a little constrained, with cast recordings for Spring Awakening and Hamilton feeling particularly cramped.

These sound issues aren't unique to the Earin, but they're tough to swallow considering the other constraints we're working with. For one, you're only going to get two and a half to three hours of audio out of the buds before they require a trip back to the charging case. So much for using these things on long flights. Neither bud has a microphone, either, so you'll have to pop them out of your ears and answer the phone the old-fashioned way. I also ran into a handful of connectivity issues where the audio would drop for a moment when my phone was too far away. In most cases, "too far away" meant my phone was in my front right pocket; since the left earbud is the one that actually forges and maintain a Bluetooth connection with the audio source, I had to be more thoughtful about where I put that source. These moments were rare and mostly fleeting, but obnoxious nonetheless. And then there's how the buds are built.

Chalk it up to either ear shape or clumsy fingers, but you will eventually drop one of them. Unlike some other fully wireless earbuds, the Earins are totally cylindrical, so they'll start rolling away the moment they hit the ground. The bud design jibes nicely with the cylindrical case, but it would've been nice if they didn't flee after a fall. Thankfully, the Earin comes with three sets of memory foam buds that did a fine job of keeping them in place. The Engadget Fitness Challenge has given me a reason to strap on my running shoes again, and I'm happy to report that these buds passed the exercise test without too much trouble. Your mileage will vary depending on how fast you go and how your ears are shaped, but the earbuds never fell completely out of my ears during a jog. If you're anything like me, you'll feel the buds start to shift. A quick poke got them back where they belonged before I had to pause my run and search for a stray bud.

So, yes, the Earin is an ambitious but flawed product. There are moments, though -- prolonged ones, even -- when the entire package works like a charm. It's magical. I can't tell you how many times I've sighed out of sheer relief because I didn't have a headphone cord to get tangled up in my scarf or my bag strap. Or when I suddenly got up from my desk and realized I was still listening to my audiobook without seeing my phone skitter along the ground. Still, the connectivity issues, combined with fairly average sound, do a lot to detract from the undeniable coolness of a completely wire-free pair of earbuds. If you're into the idea of rocking some truly wireless earbuds, you might have better luck with the $299 Bragi Dash. Otherwise, the Earin could be a solid deal after a price cut and some updates.

In this article: audio, av, bluetooth, earbud, earbuds, earin, gear, hands-on, irl, kickstarter, review, startup, wireless
All products recommended by Engadget are selected by our editorial team, independent of our parent company. Some of our stories include affiliate links. If you buy something through one of these links, we may earn an affiliate commission.