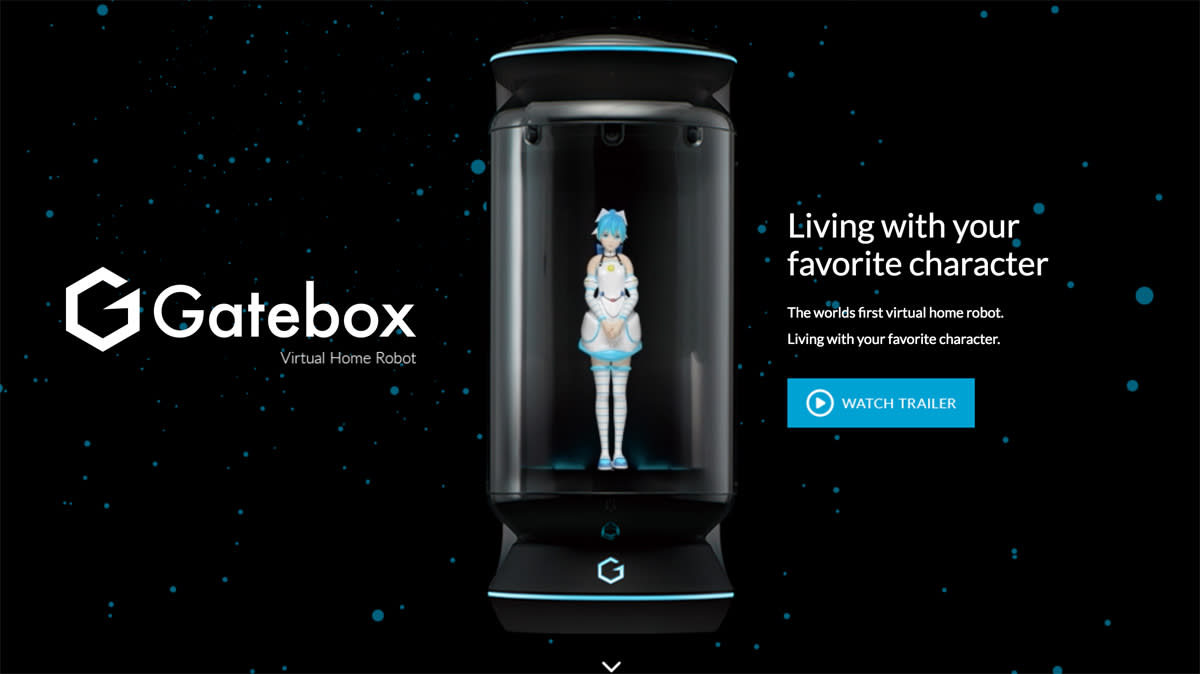 Gatebox AI is an unusual virtual assistant that involves a projected CGI character kind-of trapped in a jar -- with voice controls! The sales pitch is that this virtual assistant will give the sensation of living with a fictional character, or according to how creator Vinclu Inc. words it, "your heroes". Which is fine, if your hero is a non-spectacular CGI anime character with blue hair and excessively submissive temperament. Behind the virtual idol/slave gloss, Gatebox AI's assistant functions approach a bare-bones Amazon Echo.

According to the preorder site, Gatebox's debut character Hikari has the "ultimate healing voice" (uh huh) and the J-Pop AI will adjust to your daily rhythms, welcoming you home or sensing when you get up. According to the demo video, the CGI "dimension traveller" will be able to switch on your lights and other home appliances based on your movement or orders. The device includes infrared tech, meaning it should be able to talk to not-so-smart home appliances that aren't WiFi-connected. (Of course, there's WiFi and Bluetooth connectivity for anything smart you do own.)

The character is made up of a two-dimensional rear projected image, and you'll be able to play other videos if you hook-up a PC to its HDMI port. When it comes to interacting with users, the Gatebox has a camera and other (unspecified) sensors to detect movement and even the owner's face.

Unlike the Echo (or even Siri), you'll have to physically press the mic button on the Gatebox to talk to your rear-projected idol; the device won't just pick up your oral commands. The company admits there's only limited conversation interactions anyhow, although there's a text message-based Chatbot for Hikari if you're also not much of a talker. You'll be able to text the her, even though she isn't real. She'll get lonely if you come home late, apparently, but again, she is not real.

There's a limited run of 300 Gearboxes, on preorder til mid January 2017, with delivery currently penned for December 2017. You'll have to really like the idea of a tiny trapped anime character of your own: preorders cost 298,000 yen -- which is roughly $2500. Hit up the creepy source links for more details. (She likes donuts.)

In this article: ai, anime, gear, gearbox, gearboxai, idol, internet, jpop, personalassistant, robots, services, video, VirtualAssistant
All products recommended by Engadget are selected by our editorial team, independent of our parent company. Some of our stories include affiliate links. If you buy something through one of these links, we may earn an affiliate commission.