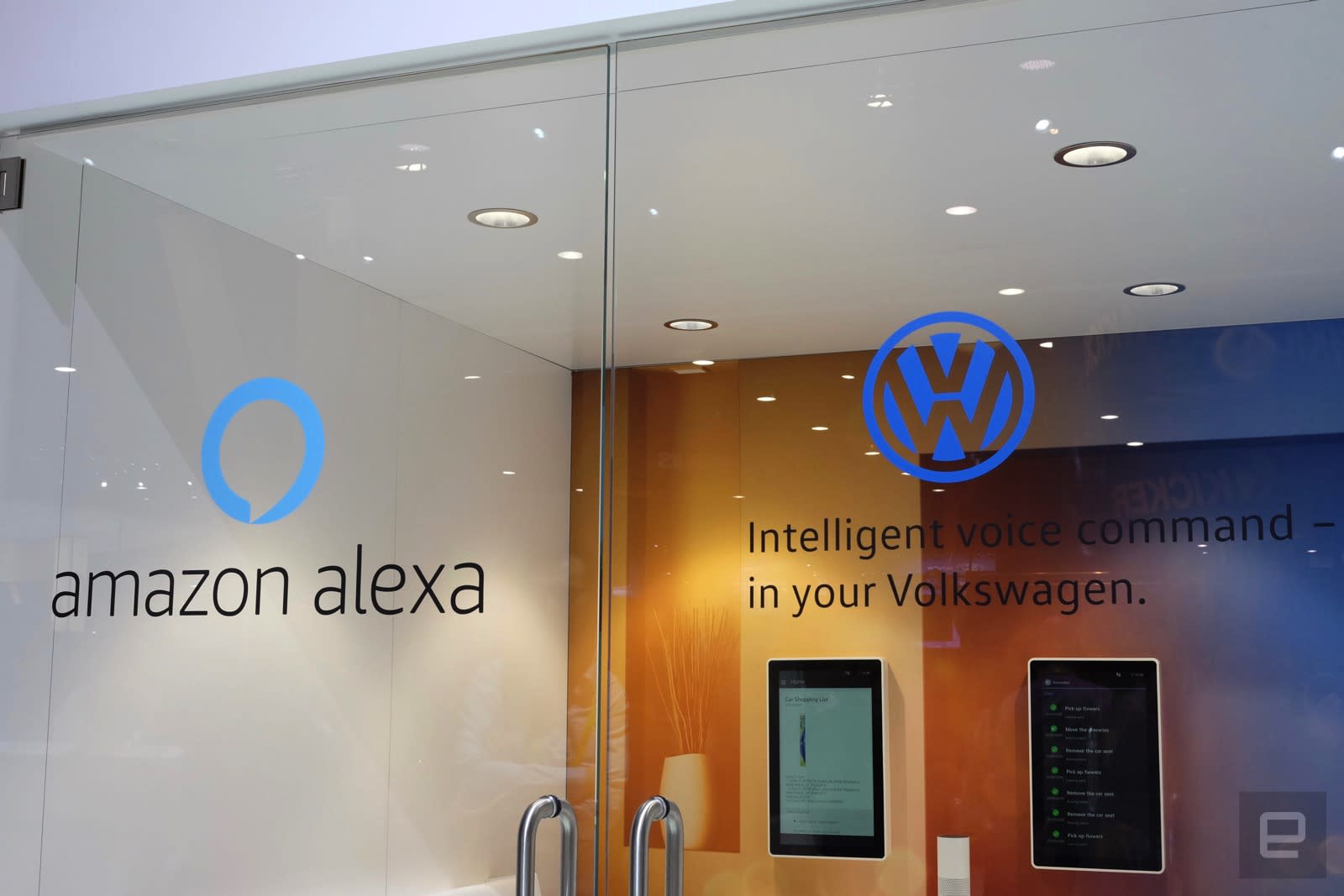 Ford isn't the only auto company adding Amazon's Alexa to its cars -- Volkswagen plans to do the same. From the quick demo I had on the CES show floor, it seems like a pretty smart pairing. VW's Alexa-enabled cars will basically have full access to everything the Echo can do, but the company built its own skill to enable a handful of car-centric features.

For starters, you can ask Alexa to give you the status of your car. This one is more useful when you're not actually in it, but if you're at home you can hear about whether your car is locked or unlocked, how much fuel is left, whether it's charing or not (if it's an EV), and what its approximate range is. You can then ask Alexa to lock or unlock the car or even beep the horn if you need to help someone find it.

You can also ask Alexa to buy supplies for your car. Since owners have to sync their VW Car-Net accounts with Amazon to get Alexa working, that means Alexa will know exactly what kind of oil or windshield wipers work with your specific vehicle.

Naturally, Alexa can help with directions as well. If you're at home, you can ask for a route and Alexa will tell you how long it'll take. It then asks if you want to send that route to your car. If you say yes, it'll be waiting for you in your navigation system all set to go. Of course, you can ask for directions in the car as well, but if you're planning your trip before leaving home you might as well remove a step from the process once you're behind the wheel. While you're at it, if you're listening to media at home, you can ask Alexa to pause it and resume it once you're back in the car.

The last feature is one of the most useful, at least to someone like me who forgets everything. VW added location-based reminders, so you can ask your car to remind you to pick up dinner when you leave work or grab the mail when you arrive home. A VW spokesperson says that its solution is better than using location-based reminders in Android or iOS because your phone doesn't ping the GPS often enough to reliably remind you when you're leaving or arriving somewhere. That may be true, but I've never noticed my phone taking the "10 to 20 minutes" the VW spokesperson claimed it routinely takes for a smartphone to activate a location based reminder. Either way, it's a useful addition to VW's software. In Amazon's Alexa app, you'll see everything that you've asked your car, just like you can see everything you ask the Echo speaker. That's also where you'll go to complete any shopping orders you try and place, and you can find your reminders there as well. I got a quick in-car demo of Alexa, and it's worth noting that nothing you ask Alexa shows up on the car's infotainment system. That makes sense, as there shouldn't be anything there to distract you from the task of driving. But even if you're not actually driving, your phone will remain the place to go if you want to see what's in your cart or what reminders you set up.

VW says that there's no timeframe yet for when Alexa will come to its cars, unfortunately, as it's still under development. But the good news is that any VW with its Car-Net software will get Alexa eventually. The service has been around since 2013, so that's a pretty good range of cars. Hopefully it'll launch sooner than later -- Ford says its going to begin its Alexa rollout later this month.

Click here to catch up on the latest news from CES 2017.
In this article: alexa, amazon, ces2017, gear, services, transportation, volkswagen, vw
All products recommended by Engadget are selected by our editorial team, independent of our parent company. Some of our stories include affiliate links. If you buy something through one of these links, we may earn an affiliate commission.