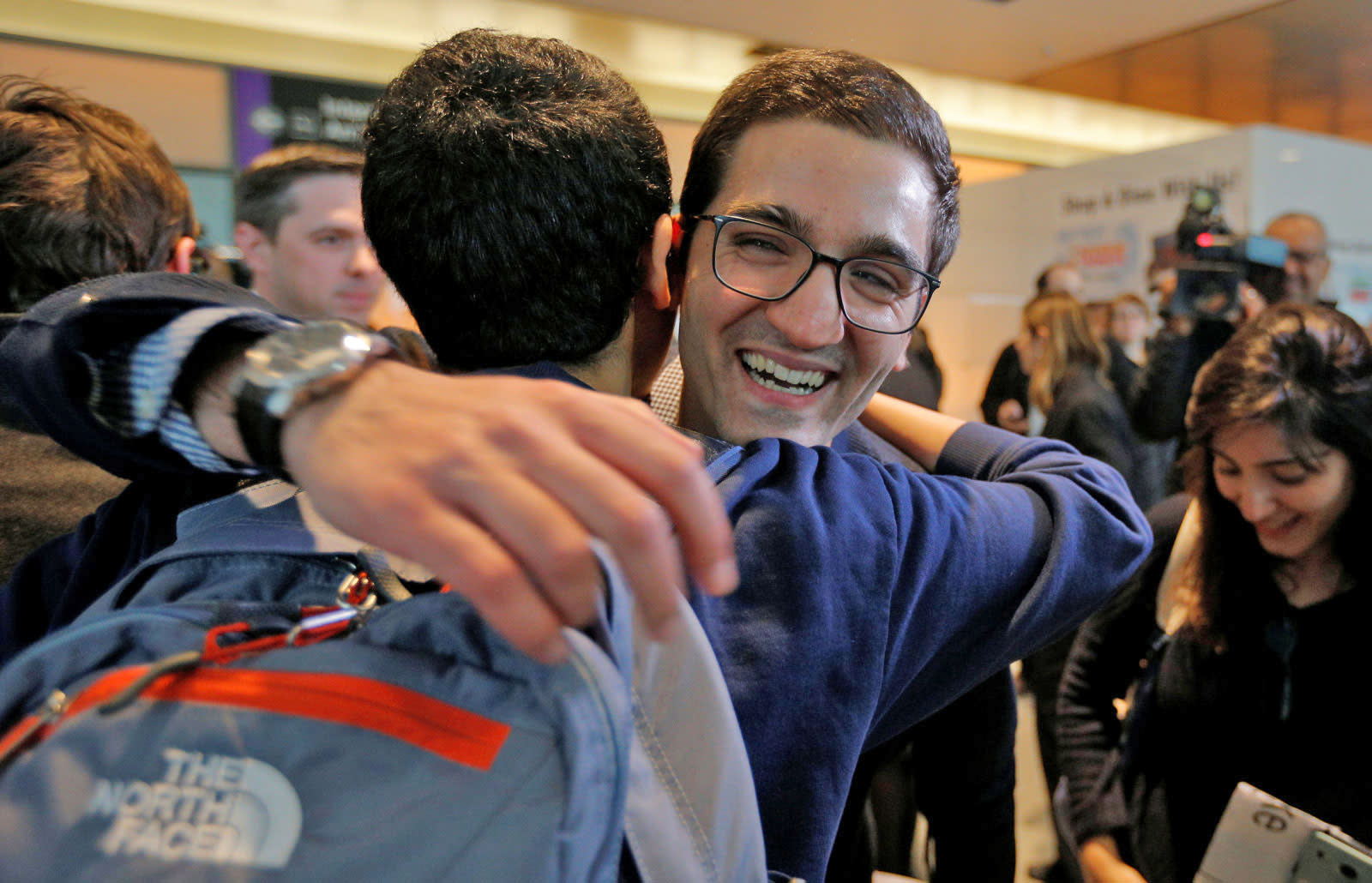 As expected, Intel, Google, Microsoft, Apple and 93 other tech firms have filed an amicus brief in support of lawsuits against President Donald Trump's executive order barring immigrants from seven countries. "The Executive Order abandons these principals [of tolerance, equality and openness]," the brief, spotted by Ars Technica, states. "[It] inflicts significant harm on American business, innovation and growth as a result."

After suits were filed against the order in Washington and other states, US District Judge James Robart blocked the order, effective immediately. The Department of Homeland Security said it would return to normal screening procedures, so many immigrants, including students with visas, green-card holders and others scrambled to get flights in case the restrictive rules were reinstated.

However, the US Justice Department under Trump has vowed to appeal. "We'll win. For the safety of the country, we'll win," Trump told reporters at the Mar-a-Lago golf club in Florida. The new president also criticized Robart in a series of tweets, saying "the opinion of this so-called judge ... is ridiculous and will be overturned."

The opinion of this so-called judge, which essentially takes law-enforcement away from our country, is ridiculous and will be overturned!

The letter, which has been in the works since before the order was overturned, aims to convince appeal courts that reinstating the rules would be illegal and harmful to their businesses. "The Order makes it more difficult and expensive for US companies to recruit, hire and retain some of the world's best employees," they wrote. "It disrupts ongoing business operations. And it threatens companies ability to attract talent, business and investment to the United States."

According to a recent Reuters/Ipsos poll, the public is in favor of Trump's order by 49 percent against 41 percent who aren't. However, a legal expert told Reuters that tweets criticizing the judge -- a highly unusual action for a president -- may "poison the well" for future litigation. "It's hard for the president to demand that courts respect his inherent authority when he is disrespecting the inherent authority of the judiciary," legal expert Jonathan Turley told Reuters.

This instability and uncertainty will make it far more difficult and expensive for US companies to hire some of the world's best talent -- and impede them from competing in the global marketplace.

The tech companies added that the order could cause talented employees from other nations to simply go elsewhere, causing a brain-drain from the US. "This instability and uncertainty will make it far more difficult and expensive for US companies to hire some of the world's best talent -- and impede them from competing in the global marketplace," according to the brief.

What's more, other nations could see the actions as hostile and simply take their balls and go home, the firms believe. "[It] could well lead to retaliatory actions by other countries, which would seriously hinder US companies ability to do business or negotiate business deals abroad."

There are some notable exceptions. Amazon and Tesla, whose bosses both attended Trump's tech summit shortly after his election, notably didn't sign the order. However, Tesla's Musk has vowed to take the immigration issue up with the President directly.

Update: Later in the afternoon, 30 other companies also joined the brief, including both Tesla and SpaceX. HP, Evernote, Linden Labs, Adobe and others signed on, however, Amazon declined to. That's because, according to Amazon, while it agrees with the brief, Washington's attorney general advised the company not to since it's a witness in the original case. The post has also been corrected to say that Amazon CEO Jeff Bezos attended Trump's first tech summit, but doesn't sit on his business advisory board.

Amicus brief on behalf of 97 tech companies, including Box, opposing the executive order on immigration: https://t.co/KjRDqnEuKa

In this article: AmicusBrief, Apple, culture, DonaldTrump, facebook, Google, Immigration, Intel, Microsoft, politics
All products recommended by Engadget are selected by our editorial team, independent of our parent company. Some of our stories include affiliate links. If you buy something through one of these links, we may earn an affiliate commission.