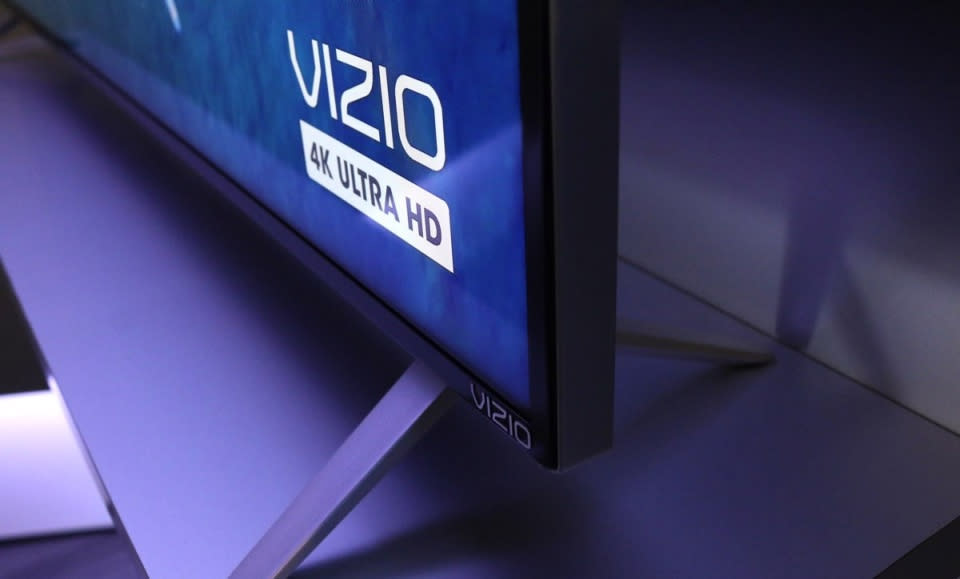 A settlement with the Federal Trade Commission and the New Jersey Attorney General will cost Vizio $2.2 million. That sum will settle the charges with both the state and federal agencies after a complaint that Vizio installed software on 11 million smart TVs to track viewing histories without consumers' knowledge. As part of the settlement, a federal court could order the company to disclose its data collection and sharing practices and get express consent from customers before doing so.

What's more, Vizio must delete any user data collected before March 1, 2016. According to the original complaint filed by the FTC and New Jersey AG, the company worked with a third party to build smart TVs that could capture "second-by-second" viewing information about what's on the screen. That includes details on content from cable, internet, set-top boxes, DVD players, over-the-air broadcasts and other streaming devices.

In a blog post explaining the case, FTC senior attorney Lesley Fair says Vizio began making smart TVs in 2014 that automatically tracked the owners viewing habits and beamed that info back to its servers. Fair explains the company also added the tracking tech to older models via a software update. All of this was done without clearly informing customers or getting the proper consent to do so.

Fair also says that Vizio sold the collected viewing data to advertisers. Those details included IP addresses that could be matched to the owner and household. From there, third parties could use the information to gather personal details like sex, age, income, marital status, household size, education, and home ownership. Vizio didn't allow the companies it was working with to identify users by name, but it did allow those third parties to track user habits across devices.

Vizio's methods for tracking your viewing habits were first revealed as part of its IPO plans in 2015. The paperwork detailed how the company used Inscape software to collected data on whatever flashed on the screen, even if it came from cable, a game console or a separate streaming device. When LeEco announced plans to acquire Vizio last year, it was revealed that Inscape would be spun off into a privately-owned company run by Vizio co-founnder William Wang. The deal has not yet closed.

Vizio will pay $1.5 million to the FTC to settle the charges in addition to a civil penalty to the state of New Jersey that brings the total to $2.2 million. The company must also implement a privacy program that evaluates its use of consumer data on a regular basis in addition to deleting most of the information it gathered. We've reached out to Vizio for a comment on the matter and we'll update this post when we hear back.

Update: In a statement to Engadget on the FTC settlement, Vizio says the program never paired collected data with "personally identifiable information" like names or contact details as the commission noted in its blog post. The company also explains that before today's announcement, it had already updated both online and on-screen disclosures, including notifications about data collection, how to disable it and how the information is used. Here's the full statement from Vizio general counsel Jerry Huang:

"Vizio is pleased to reach this resolution with the FTC and the New Jersey Division of Consumer Affairs. Going forward, this resolution sets a new standard for best industry privacy practices for the collection and analysis of data collected from today's internet-connected televisions and other home devices. The ACR program never paired viewing data with personally identifiable information such as name or contact information, and the Commission did not allege or contend otherwise. Instead, as the Complaint notes, the practices challenged by the government related only to the use of viewing data in the 'aggregate' to create summary reports measuring viewing audiences or behaviors."

"Today, the FTC has made clear that all smart TV makers should get people's consent before collecting and sharing television viewing information and Vizio now is leading the way."

This post has also been updated to to include previously reported info on Vizio's viewer tracking practices and its pending acquisition by LeEco.

In this article: ACR, av, business, ftc, gear, inscape, newjersey, privacy, settlement, smarttv, viewinghistory, vizio
All products recommended by Engadget are selected by our editorial team, independent of our parent company. Some of our stories include affiliate links. If you buy something through one of these links, we may earn an affiliate commission.