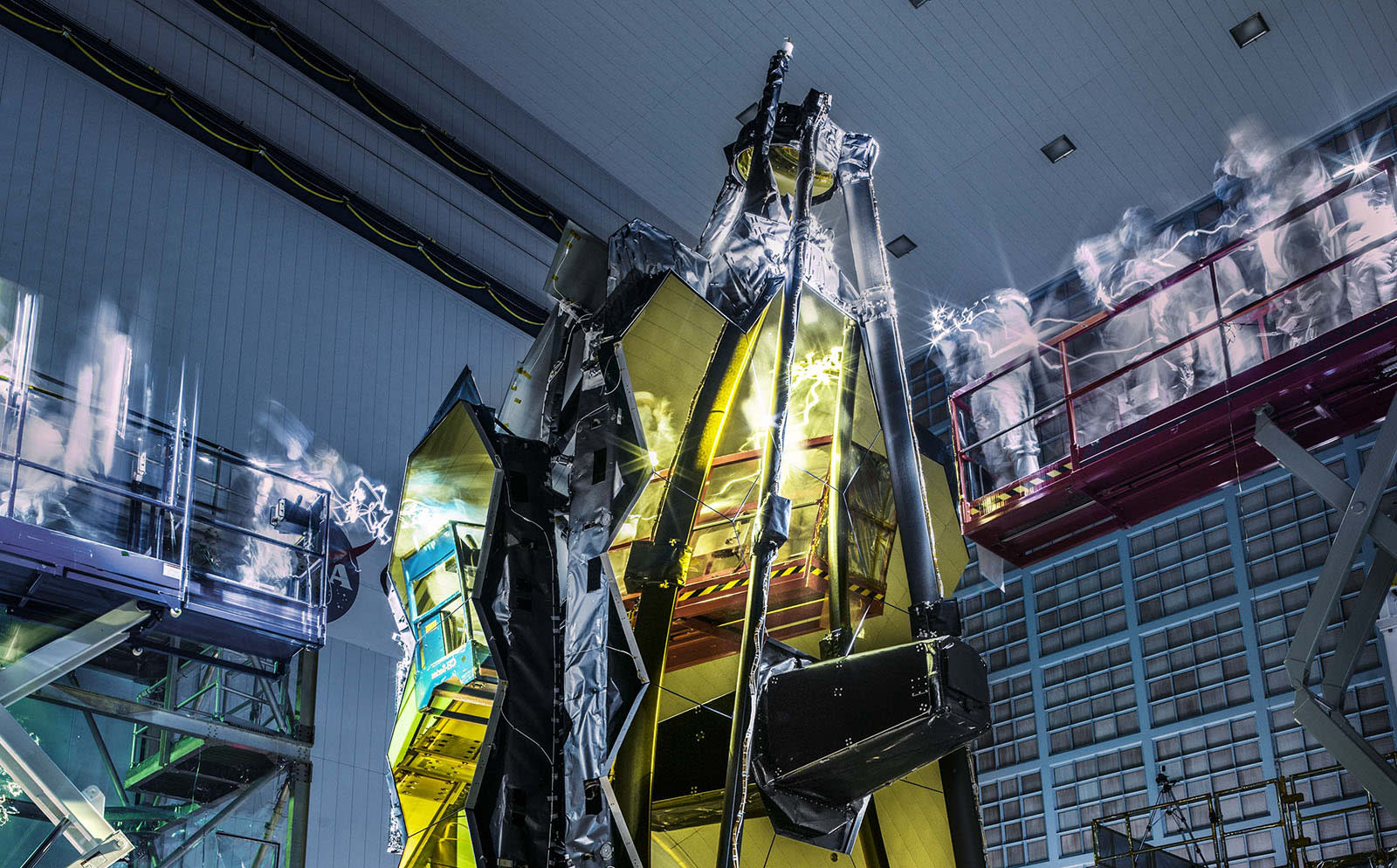 Lights out on a ghostly James Webb Space Telescope inspection

The James Webb Space Telescope (JWST) might be the most important scientific instrument ever developed. It'll peer back in time over 13 billion years to the early universe and look for signs of life around the recently discovered TRAPPIST-1 planetary system.

Launching it next year to its final "L2 Lagrange point" orbit (around the Sun, not the Earth) a million miles away will be one of the most complex NASA missions ever. With an $8.8 billion budget and month-long wait before it's deployed, it's bound to be one of the most suspenseful, too.

As such, scientists want to ensure there's not a single thing wrong when it's launched next year. The JWST recently underwent "earsplitting" 150 decibel acoustic tests to ensure it's ready to ride the Ariane 5 and its nearly 3 million pounds of maximum thrust. Prior to that, vibration tests were completed successfully last month after a delay in December caused by testing rig issues.

Shaking the telescope up is just part one, however. After that, teams must go in and look for pieces and particles that may have fallen off. First, the lights are turned out, then NASA's "contamination control engineers" scour the JWST with bright and ultraviolet flashlights. Contamination stands out in a dark room, so it can easily be flagged by personnel.

That's where this ghostly photo at the top of the article comes in. Getting a decent picture in the dark requires a long exposure, so NASA photographer Chris Gunn left the shutter open for what looks like at least a few minutes. The contamination technicians' movements appears as blurs and half-exposed avatars, while their flashlights make flashes and lightning-like traces along the scope's mirrored surfaces. Gunn said he also used a "light painting" technique to illuminate the main mirror.

As the telescope must unfold in space (it's shown above in a stowed position on the Ariane 5 ESL), its dynamic structure makes testing a challenge compared to the fixed-position Hubble scope. "Webb is the first time we're building for both stability and mobility," said JWST engineer Lee Feinberg. "This means that JWST testing is very unique, complex, and challenging." All products recommended by Engadget are selected by our editorial team, independent of our parent company. Some of our stories include affiliate links. If you buy something through one of these links, we may earn an affiliate commission. All prices are correct at the time of publishing.
View All Comments
Lights out on a ghostly James Webb Space Telescope inspection