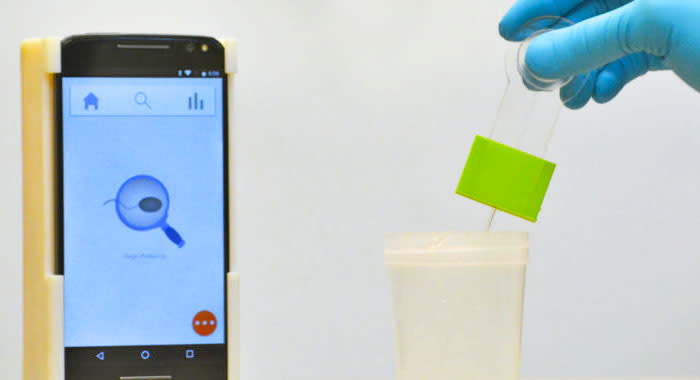 Harvard researchers have developed a new device that helps men easily measure their fertility at home with their smartphone. While similar test kits exist, what sets this prototype apart is its affordability. Costing just $4.45 to make, this impressive prototype takes less than five seconds to test your little swimmers, analyzing their count and ability to swim with 98 percent accuracy.

Instead of simply relying on an app like similar at-home fertility tests, this method also utilizes a tech-filled smartphone case. Using a disposable microfluidic chip with a tiny tube, participants can draw up to 35 microlitres of semen inside of its bulb, slotting the sealed sample safely back inside the phone case. Once contained, the device's LEDs and lenses illuminate and magnify the sperm-packed chip, allowing the app to analyze your swimmers using stills taken from videos by your phone's camera.

The only downside to the test so far is that it struggles to detect deformed sperm - a crucial part of assessing fertility. With the device still in the early stages, however, the researchers remain confident that better processing algorithms and upgraded hardware could quickly help the device overcome these limitations.

While this isn't the the first method that allows men to test the potency of their seed, it's certainly one of the best implemented. Previously announced fertility apps, Yo and Trak have offered similar at home testing solutions, with Trak already receiving FDA approval. Yet while Trak requires you to enter information from its measurement device manually, this new method allows users to get the same results with minimal effort. Yo is also a bit lacking in comparison. Offering an app-only solution which measure's swimming ability, Yo unfortunately involves users getting sperm uncomfortably close to your phone's camera.

With an estimated 30 million men facing fertility issues around the globe, this new device could help guys to easily and painlessly get themselves tested. Still, with the as yet untitled device currently lacking FDA approval and any kind of marketing strategy, it could well be years before the the impressive new test makes its way into homes.

In this article: app, fertility, FertilityTest, mobile, science, sex
All products recommended by Engadget are selected by our editorial team, independent of our parent company. Some of our stories include affiliate links. If you buy something through one of these links, we may earn an affiliate commission.