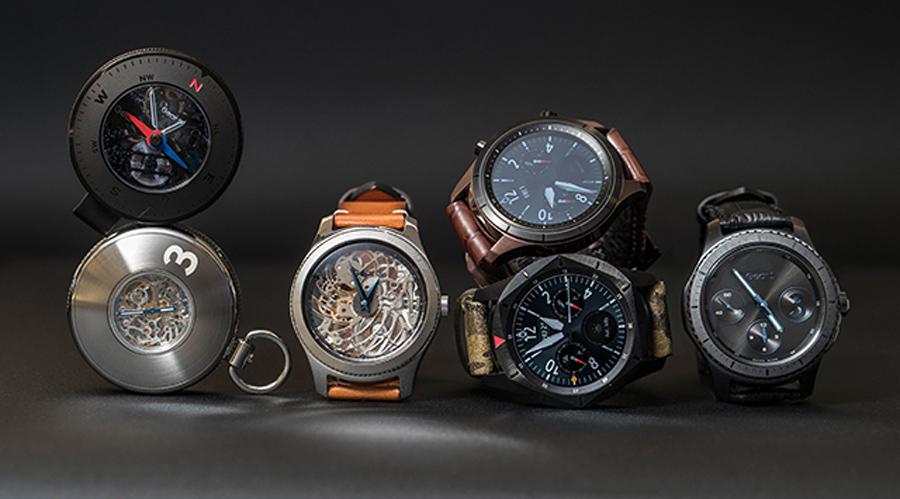 As the world's biggest watch show continues to pump out smartwatch variants from nearly everyone, at Baselworld, established player Samsung apparently wanted to pay lip-service to the horological items that came before watches got smart. It unveiled a handful of concept devices, including one Gear S3-esque device that houses a mechanical Swiss-made movement -- apparently instead of your smartwatch touchscreen. It also had three more typical Gear S3 watches with upgraded build materials -- classier Gear S3 smartwatches. However, my attention was drawn to the device on the far left: a hybrid pocket watch version of the Gear S3 that appears to pair two smaller watch faces with a compass, for bonus ... "innovation" points.

Details are scant: do either of the pocket watch faces use Android Wear? Is there actually pent-up demand for Samsung-made, compass-packing pocket watches? Fortunately, this can all be excused in the name of conceptual artistry, but the company brought out Switzerland-based luxury watch designer, Yvan Arpa (who apparently advised on the original Gear S3) to praise Samsung's commitment to reflecting "the heritage and evolution of the watch industry" in the companion press release. What's rarer than a gold Apple Watch? A Samsung pocket watch. Because you're probably never going to see one again.

In this article: baselworld, baselworld2017, concept, culture, gear, gears3, pocketwatch, samsung, steampunk, watch, watches, wearables
All products recommended by Engadget are selected by our editorial team, independent of our parent company. Some of our stories include affiliate links. If you buy something through one of these links, we may earn an affiliate commission.