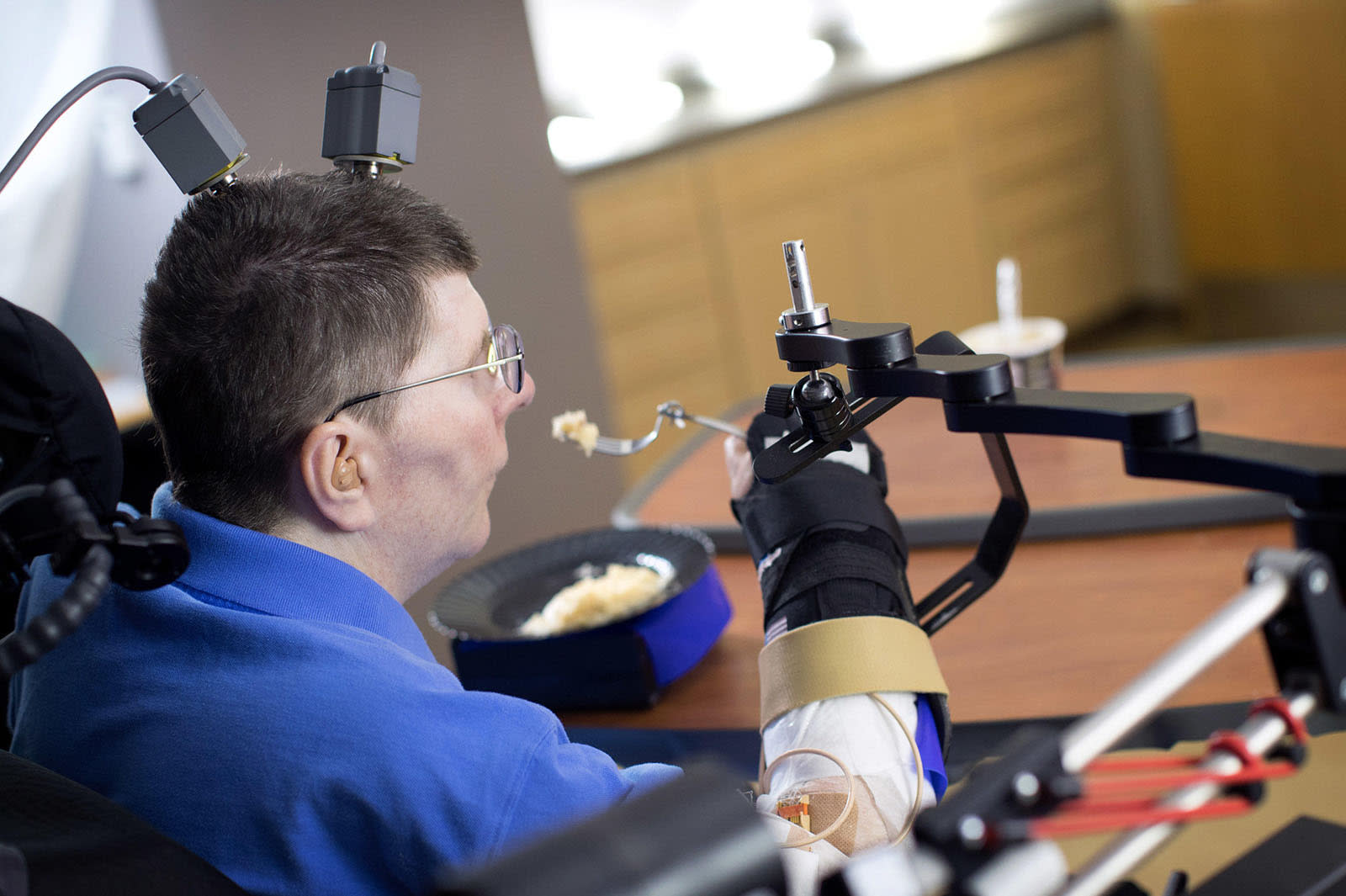 Helping paralyzed people move on their own has been a lot tougher than 1970s TV shows led us to believe it would be. For what they believe is the first time, researchers used tech to bypass a quadriplegic patient's severed spinal cord, helping him move his own hand with his mind and feed himself without aid. The work could lead to "a new generation of neurotechnologies that we all hope will one day restore mobility and independence for people with paralysis," says research lead Leigh Hocherg.

The trial was done by Case Western Reserve University researchers and the Cleveland Functional Electrical Stimulation (FES) center. "For somebody who's been injured eight years and couldn't move, being able to move just that little bit is awesome to me," said the 56-year-old patient, Bill Kochevar, who became paralyzed from the shoulders down following a bicycle accident. "It's better than I thought it would be."

A lot of work has led up to that small but important win. Scientists have been working for decades developing an intracortical brain-computer interface (iBCI). At first, patients could only use the tech to control images on a screen, but researchers and doctors eventually got them to move robotic arms with the tech, allowing one patient to drink coffee on her own.

The other part of it is "functional electrical stimulation (FES)," a system that can stimulate nerves in your limbs to makes your arms, legs or fingers move. Such tech has previously been used to help paralyzed patients move their limbs, but so far, they've only been able to activate it by shoulder shrugs or nodding, and not brain signals.

The trick that the Case Western and Cleveland FES teams did was marrying the two. To get the brain interface working as accurately as possible, they put Kochevar in a special MRI machine, had him imagine moving different parts of his body, and tracked which parts of the brain lit up. "This kind of patient-specific structural imaging is the only way to get an accurate atlas," study co-lead Bolu Ajiboye told Time.

The group used the data to implant electrodes at specific spots in Kochevar's brain, and attached them to a custom computer interface that can decipher the commands. For practice, he used it to move a virtual limb on a screen, using similar thoughts that powered his real arm. "It went very well very quickly," he said. "I learned how to do it right away and got better and better."

At the same time, the FES center was using a remotely operated 36-electrode array to strengthen Kochevar's atrophied arm and hand muscles. When the iBCI was finally married with the stimulating electrodes, he was able to eat, drink and scratch his nose using his own hand almost immediately. "To me, it feels exactly the same as it did before, except there is a little delay," he said.

Kochevar has no perception of touch, of course, but surprisingly, it doesn't bother him at all. "We actually did some experiments in which I closed my eyes while reaching and I was able to do it," he said. However, some day it might be possible to simulate those feelings.

Though the system works well, it's still too bulky and complex for the real world. The next step is to miniaturize the tech so it can be implanted within the body, and possibly adapted to the user's legs, too. A key part of the study has been Kochevar's "extraordinary" participation, the team said. "He's really breaking ground for the spinal cord injury community," said Case Western Reserve's Bob Kirsch. "This is a major step toward restoring some independence."

In this article: BrainSurgery, CaseWesternReserveUniversity, Electrodes, medicine, MotorCortex, Paralyzed, Quadriplegic, science, video
All products recommended by Engadget are selected by our editorial team, independent of our parent company. Some of our stories include affiliate links. If you buy something through one of these links, we may earn an affiliate commission.