Fujifilm surprised the camera world last year with the introduction of the GFX 50S, its first medium-format mirrorless. The shooter, which is now available for $6,500 body only, packs a large 51.4-megapixel CMOS sensor (43.8 x 32.9mm) in a DSLR-like frame that only weighs 1.6lbs (740g). If you've ever used a Fuji before, its ergonomics should be familiar, thanks in large part to the company's trademark physical dials and generally premium build. What powers the GFX 50S is the latest X-Processor Pro, the same imaging chip found on Fujifilm's flagship X-Pro2 and X-T2 cameras.

But how do these specs translate into real-world use? To put the GFX 50S through its paces, I took it with me to SXSW 2017 and on a trip to the nation's capital, Washington, DC. Most of the photos I captured looked great straight out of the camera: sharp and rich in color, with almost no signs of noise in low-light shots. And you shouldn't expect anything less from a $6,500 camera, which I paired with a $1,500 GF63mm f/2.8 lens. 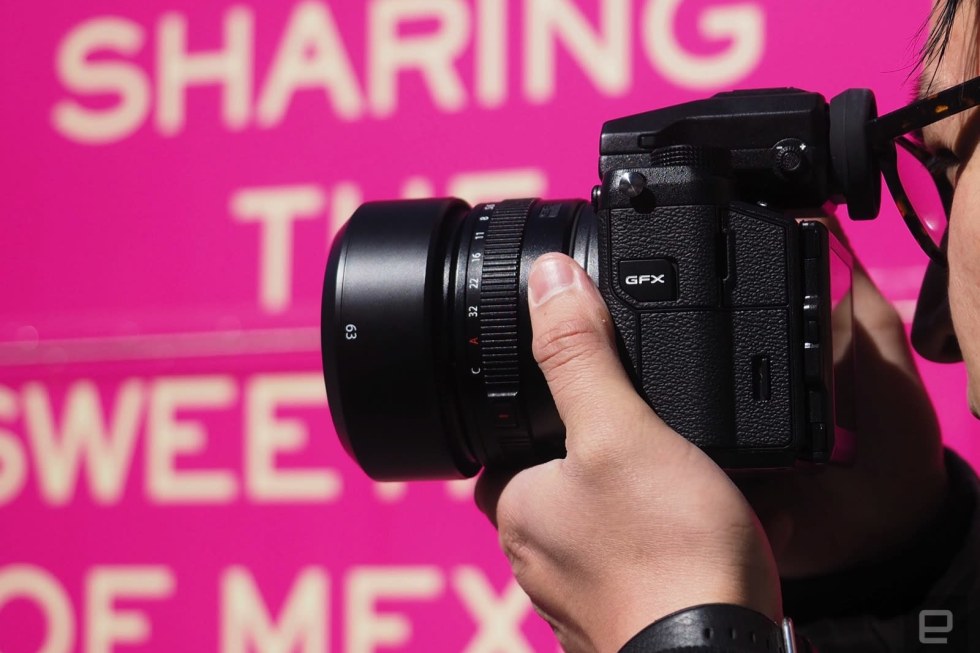 I wish the GFX 50S supported 4K video though, especially since that's a feature we're now seeing even on lower-end cameras. Instead, recording here is limited to 720p and 1080p at 24, 25 and 30 frames per second. While the 51.4-megapixel sensor helps create a crisper image then, it still feels like Fujifilm could have done buyers a favor by future-proofing it. Still, video has never been the company's strongest suit, so it shouldn't come as a surprise that even this medium-format mirrorless beast falls short in that regard.

Thankfully for Fuji, the GFX 50S makes up for its video shortcomings with some terrific stills. And given that the camera is geared toward professional photographers after all, I have a feeling the GFX 50S won't have any shortage of suitors. In this article: 50s, camera, cameras, engadgetirl, fuji, fujifilm, fujifilmgfx50s, gadgetry, gadgets, gear, gfx, gfx50s, mediumformat, mirrorless, mirrorlesscamera, review, video
All products recommended by Engadget are selected by our editorial team, independent of our parent company. Some of our stories include affiliate links. If you buy something through one of these links, we may earn an affiliate commission.