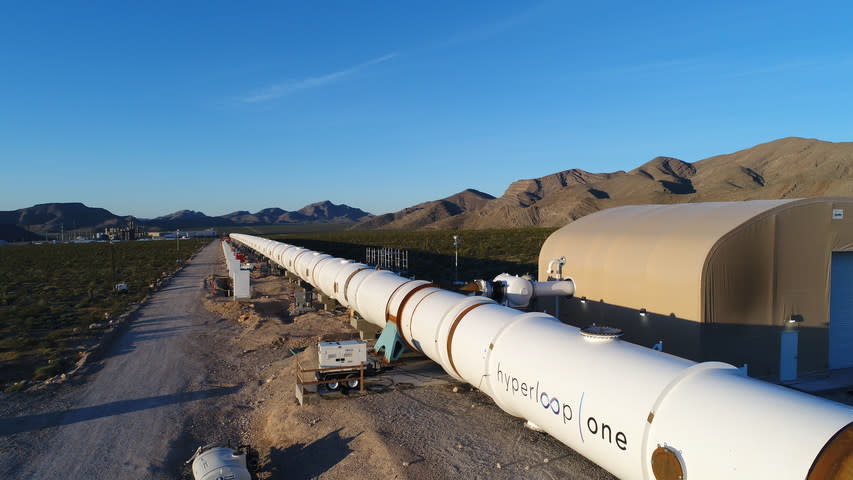 It was August 2013 that Elon Musk, under pressure from Shervin Pishevar, published his white paper on the Hyperloop. Just three years and seven months later, and the world's first Hyperloop tube has been declared ready for testing. Hyperloop One has announced that DevLoop, its Nevada test facility, has been "finalized," and will serve as the testbed for the future of transportation.

We already knew that the DevLoop tube would be 3.3 meters wide, but the company revealed that DevLoop stands 500 meters long. When we spoke to the company's leaders in January, we learned that there are still several issues that stand between it and a first flight. For instance, co-founder Josh Giegel revealed that getting the pod's electronics to work reliably in a low-pressure environment was proving tricky.

Hyperloop One has often made very loud overtures to countries outside the US that are looking to redevelop their transportation. The longstanding belief is that somewhere in the UAE, probably Dubai, will be the first to build a freight or passenger Hyperloop in the real world. After all, land is plentiful, distances between cities are long and, frankly, there's money enough to afford it.

To counter this impression, Hyperloop One has announced that it's currently looking at 11 routes inside the US as part of its global challenge program. The routes vary wildly between a dinky, 64 miles journey between Boston and Providence all the way through to a 1,152 mile route connecting Cheyenne and Houston. That last journey, for instance, currently takes 17 hours by car, but would take just 105 minutes in the Hyperloop.

Using math, that last figure supposes an average speed of 658 miles per hour, which would take into account acceleration, deceleration and geography on the route. The fact that we're still so close to that much-vaunted top speed of 750mph suggests that Hyperloop may live up to the hype. Not to mention that it's taken less than four years for this technology to turn from a fever dream into a halfway realistic proposition.

In this article: ElonMusk, gear, Hyperloop, HyperloopOne, JoshGiegel, ShervinPishevar, TL17HYPLP, transportation
All products recommended by Engadget are selected by our editorial team, independent of our parent company. Some of our stories include affiliate links. If you buy something through one of these links, we may earn an affiliate commission.