For years now, the Honda's Clarity line has been about figuring out the best way to bring to hydrogen fuel cell cars to market. As you probably guessed, it's been a pretty slow process. To wit: Honda launched its Clarity Fuel Cell in California in late 2016, and there's something like 100 of them rolling around the state right now. Now, that ride has some more company: Honda revealed new plug-in hybrid and battery-powered models here at the New York Auto Show. 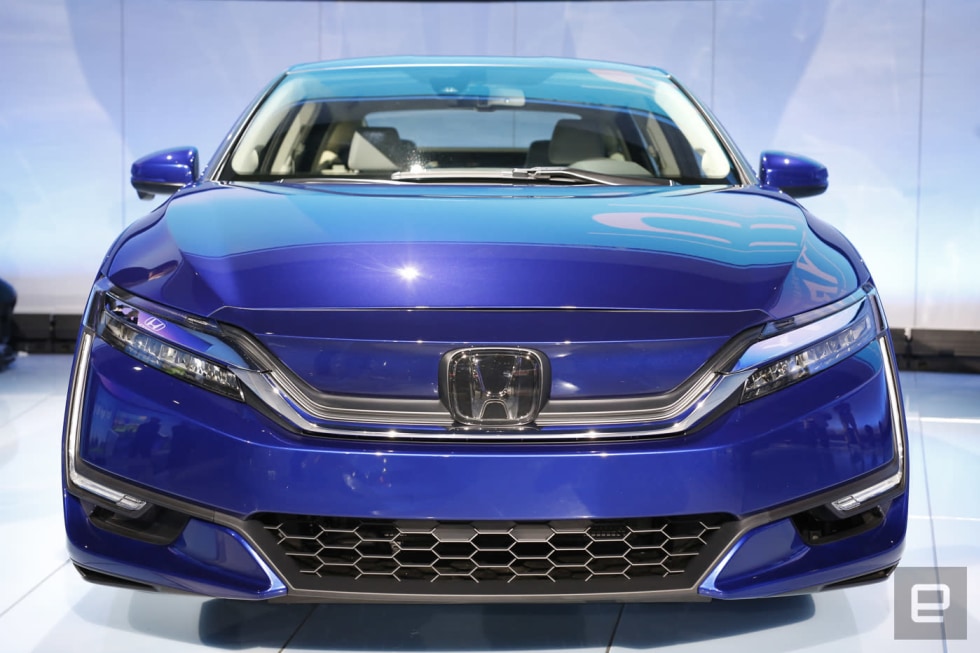 It's a good thing, too, since hydrogen-powered cars are severely limited by infrastructure (though some organizations really don't mind). Honda is understandably pleased with itself since this is the first time fuel cell, battery and hybrid power systems have been made available on a single vehicle platform. Like their Fuel Cell cousins, the Electric and Hybrid models fits five people into a surprisingly premium cabin. Other hybrids and EVs skew toward more utilitarian looks, and these relatively plush environments could give Honda a leg up as these things begin to build market traction. After all, Honda wants two-thirds of its global sales to come from electric vehicles by 2030, and that's a goal that definitely requires some thoughtful moves.

Let's put looks aside for a moment, though. Honda expects the Clarity Electric to go for only about 80 miles on a single charge of its 25.5kWh battery, and that figure should drop even more if you gun that 161-horsepower electric motor for too long. You'll be able to take one of these things from totally dead to full in three hours at the standard 240 volts, but if you've got an SAE combined charging system handy, expect an 80 percent charge in about 30 minutes.

Honda took a bit of a hiatus from EVs after discontinuing the Fit EV a few years ago, so news of a new electric offering is naturally exciting. The hybrid is a good-looking machine that should run for a 42-mile stretch using just its battery. When you factor in the four-cylinder engine, the expected driving range reaches over 330 miles. And the pièce de résistance? It'll be built in America, too.

In this article: 2017nyautoshow, clarity, electric, electricvehicle, ev, fuelcell, gear, hands-on, honda, newyorkautoshow, transportation
All products recommended by Engadget are selected by our editorial team, independent of our parent company. Some of our stories include affiliate links. If you buy something through one of these links, we may earn an affiliate commission.