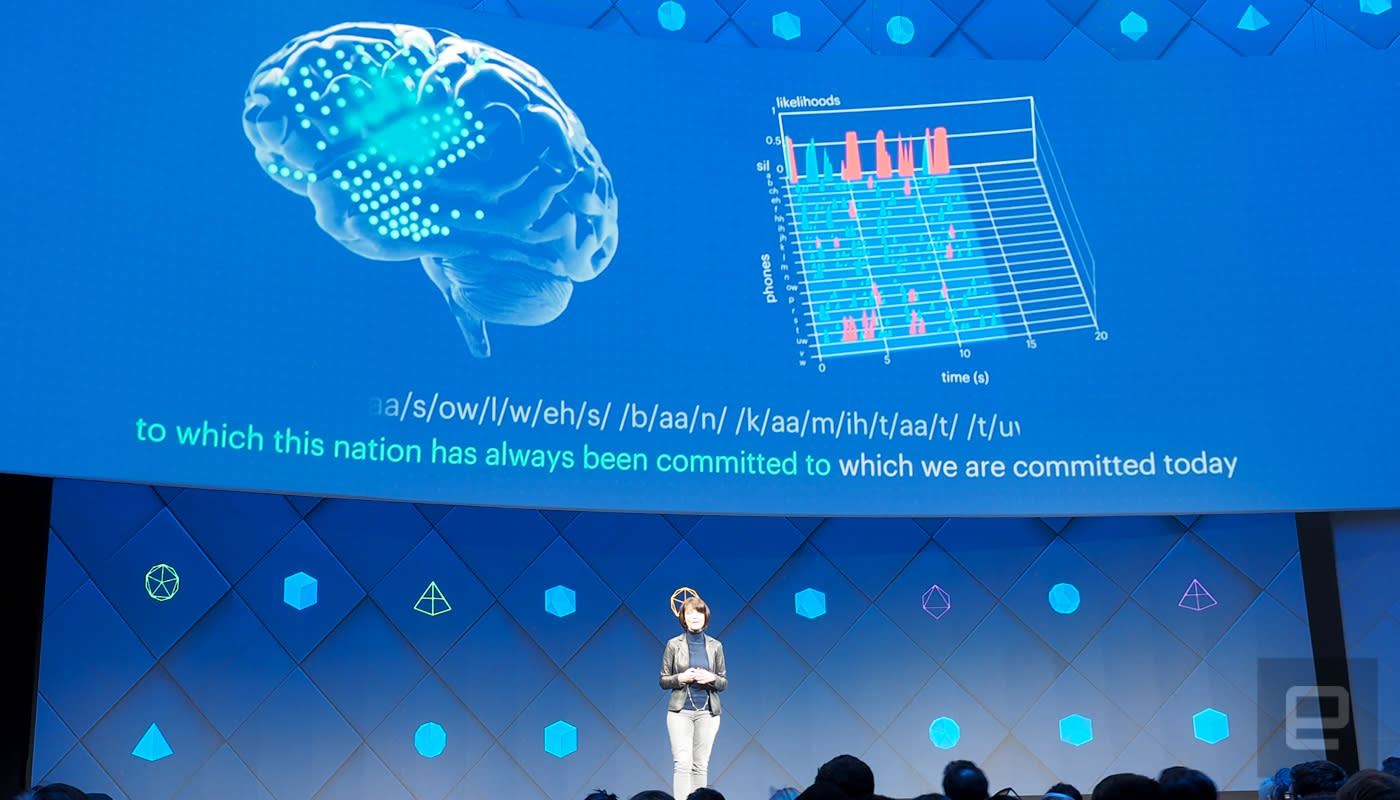 Facebook wants you to use your brain to interact with your computer. Specifically, instead of using something primitive like a screen or a controller, the company is looking into ways that you and I can interact with our PCs or phones just by using our mind. Regina Dugan, the head of Building 8, the company's secretive hardware R&D division, delved into this on stage at F8. "What if you could type directly from your brain?" she asks.

In a video demo, Dugan showed the example of a woman in a Stanford lab who is able to type eight words per minute directly with her brain. This means, Dugan says, that you can text your friends without using your phone's keyboard. She goes on to say that in a few years time, the team expects to demonstrate a real-time silent speech system capable of delivering a hundred words per minute. "That's five times faster than you can type on your smartphone, and it's straight from your brain," she said. "Your brain activity contains more information than what a word sounds like and how it's spelled; it also contains semantic information of what those words means."

And that's not all. Dugan adds that it's also possible to "listen" to human speech by using your skin. It's like using Braille, but through a system of actuators and sensors. Dugan showed a video example of how a woman could figure out exactly what objects were selected on a touchscreen based on inputs delivered through a connected armband. The armband's system of actuators was tuned to 16 frequency bands, and has a tactile vocabulary of nine words, learned in about an hour.

This, Dugan says, also has the potential of removing language barriers. "You could think in Mandarin, but feel in Spanish," she said. "We are wired to communicate and connect."

Of course, a lot of this tech is still a few years out. And this is just a small sample of what Dugan has been working on since she joined Facebook in April 2016. She served as the 19th Director of the United States' Defense Advanced Research Projects Agency and she's the former head of Google's Advanced Technology and Projects group (no big deal).

The stuff that Facebook is creating at Building 8 is modeled after DARPA, and would integrate both mind and body. "Our world is both digital and physical," she said, saying there's no need to put down your phone in order to communicate with the people in front of you. That is a false choice, she said, because you need both. "Our goal is to create and ship new, category-defining consumer products that are social first, at scale," she said. "We can honor the intimacy of what's timeless, and also create products that refuse to accept that false choice."

In a Facebook post, CEO Mark Zuckerberg states: "Our brains produce enough data to stream 4 HD movies every second. The problem is that the best way we have to get information out into the world -- speech -- can only transmit about the same amount of data as a 1980s modem. We're working on a system that will let you type straight from your brain about 5x faster than you can type on your phone today. Eventually, we want to turn it into a wearable technology that can be manufactured at scale. Even a simple yes/no "brain click" would help make things like augmented reality feel much more natural."

In this article: building8, design, f82017, facebook, gadgetry, gadgets, gear, hardware, internet, personal computing, personalcomputing, ReginaDugan, science
All products recommended by Engadget are selected by our editorial team, independent of our parent company. Some of our stories include affiliate links. If you buy something through one of these links, we may earn an affiliate commission.