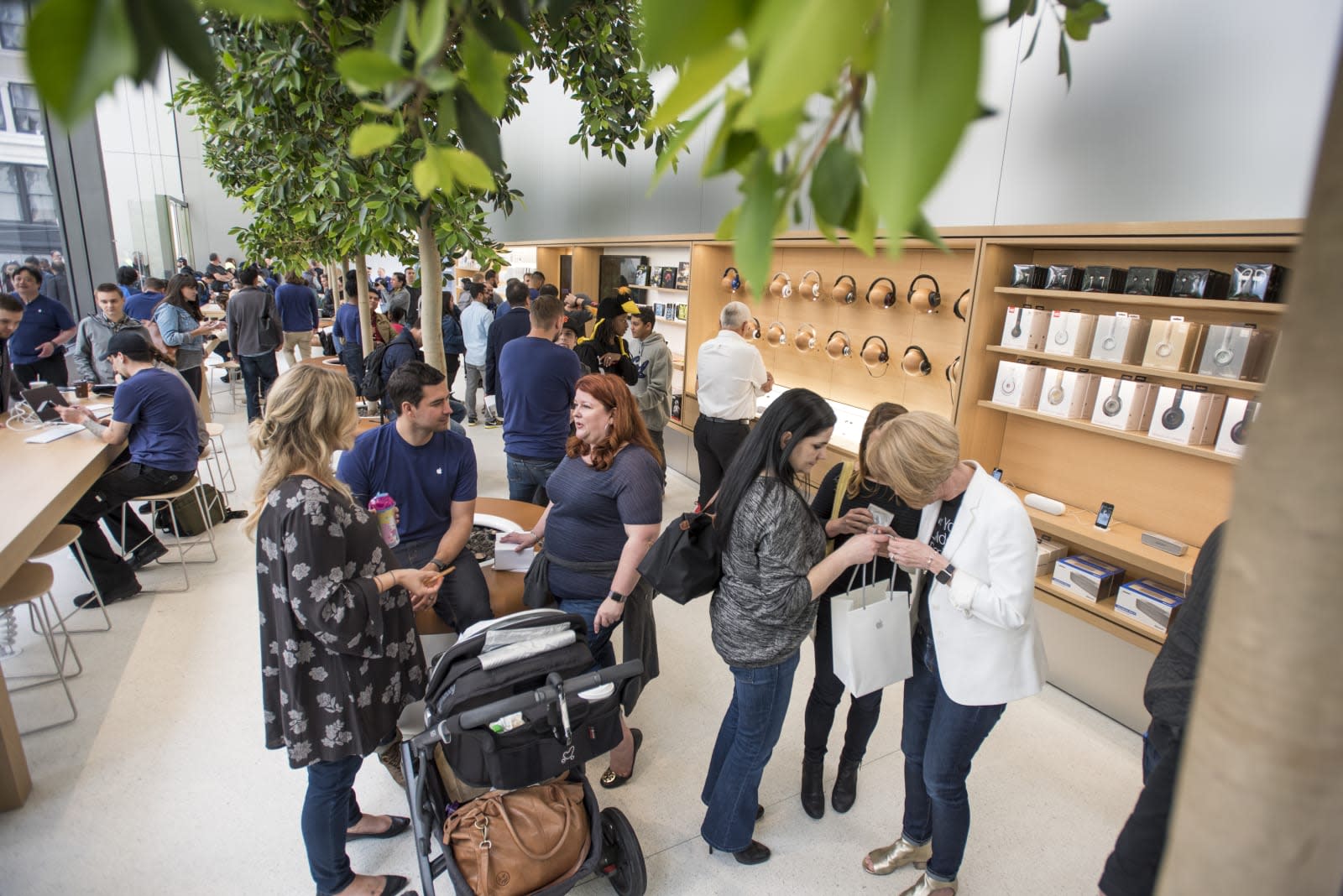 Apple's retail stores have long had a social side. You might not visit just to hang out, but the combination of free workshops and an abundance of connected devices gives you a reason to stay besides gawking at the latest products... if just to check up on Facebook. And now, Apple is banking on that social aspect as a selling point. The company is both redesigning its 100 largest stores and launching new "Today at Apple" workshops to turn its stores into community spaces of sorts. The shops are still very much geared toward sales, but you'll have more reasons to swing by on a frequent basis.

The bigger stores are now changing their Genius Bars into "Genius Groves," complete with lines of trees. We doubt the flora will help you feel better when your iPhone is broken, but they're at least more inviting. You'll also see new conference and meeting spaces alongside new video screens.

The workshops, meanwhile, revolve around new in-store Creative Pros who host free sessions based around Apple tools and Apple-friendly devices. There are 90-minute Studio Hours that let you bring in your own project for advice (or simply work outside of your usual space), music and photography labs, a Kids' Hour with programmable Sphero robots and pro-specific sessions. You'll even see photo and sketch walks that take you outside of the store. All stores are getting new mobile screens to help present "Today at Apple" sessions, as well as the seating and sound systems to match.

The new workshops will be available by the end of May. As for the larger stores' upgrades? That's likely to vary by location, but it'll likely be impossible to miss.

Apple retail chief Angela Ahrendts tells CBS that this isn't so much a reinvention as a logical extension of what the tech giant has already been doing in its stores. And yes, she imagines that people might soon decide to meet at Apple instead of the nearby coffee shop. That may be a tad optimistic when the workshops are clearly tailored to rookies and niche pros. However, the shift is still important -- it suggests that Apple will fight retail competition from Microsoft and even Amazon by turning stores into regular destinations rather than strictly functional shopping hubs. If you keep coming back, after all, it increases the odds that you'll buy an iPhone or Mac for your next tech upgrade.

In this article: apple, applestore, gear, mobile, personal computing, personalcomputing, retail, store, todayatapple, workshop
All products recommended by Engadget are selected by our editorial team, independent of our parent company. Some of our stories include affiliate links. If you buy something through one of these links, we may earn an affiliate commission.