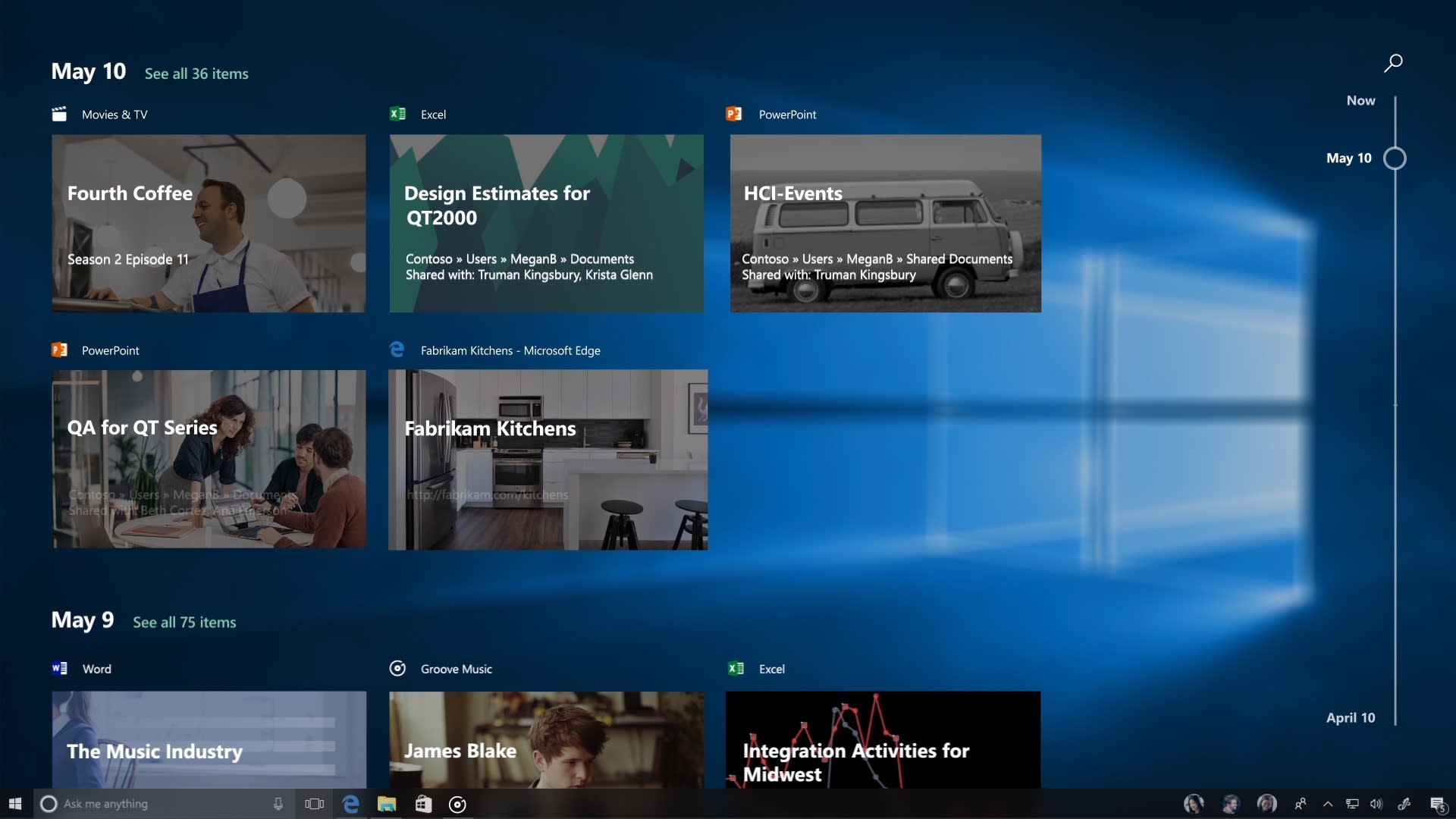 One of the more intriguing features Microsoft will include in this fall's Windows 10 Creators Update is Timeline. As the name suggests, it's a way for you to move backwards in time and see things you were working on in the past and resume what you were doing. Microsoft described it as a visual timeline of everything you were doing on your computer, and you can jump back into files, applications and websites where you left off.

Introducing Timeline. Easily jump back in time to continue where you left off. #Windows10 #MSBuild pic.twitter.com/e3gxhXnp6W

Timeline lives in the Windows app switcher. When you click it, you'll see your active apps, but below that you'll see what you were running earlier in the day. Clicking down on one of those things that you were using earlier will pop it open just as you were using it before. This works across multiple devices, as well. When you open up another Windows device where you're signed in, you can resume the tasks you were using before. This will even work across other devices like an iPhone using the Cortana app. If you're somewhere where you have Cortana, it prompts you to continue working on whatever you were doing before. If you don't have the specific app installed on your phone, it points you to the right app.

At first glance, it sounds a little bit like the Time Machine backup feature that Apple has included in macOS for years now. But Time Machine is more of a file backup system that lets you go back and see earlier versions of files that you might want to restore. Microsoft's Timeline covers applications and websites as well as just files, and it doesn't require an external hard drive, as it's not really a true backup system in the way Time Machine is. Indeed, Timeline appears more like Microsoft's answer to Continuity, a feature Apple build into macOS and iOS that lets you pick up and resume work across whatever Apple device you're using.

Timeline is just one feature in the forthcoming Creators Update, which features a host of tools for using Microsoft's software and services across devices. The "Microsoft Graph" set of APIs will let you pick up and continue work across multiple devices and will iOS and Android as well as Windows. It also gives you have a "universal clipboard" across your devices.

Click here to catch up on the latest news from Microsoft Build 2017.
In this article: applenews, build2017, creatorsupdate, gear, microsoft, personal computing, personalcomputing, timeline, windows10, windowstimeline
All products recommended by Engadget are selected by our editorial team, independent of our parent company. Some of our stories include affiliate links. If you buy something through one of these links, we may earn an affiliate commission.